Chelsea will hope to reach the UEFA Champions League quarter-finals when they take on Lille in the Round of 16 second leg on Wednesday.

The curtains will fall on UEFA Champions League Round of 16 this week, with the remaining four second leg fixtures scheduled for Tuesday and Wednesday. All four ties are delicately poised, and at Stade Pierre Mauroy, LOSC Lille and Chelsea will face off, with the Blues holding a two-goal lead.

Lille reached the UEFA Champions League Round of 16 after topping Group G ahead of Red Bull Salzburg, Sevilla and VfL Wolfsburg. Meanwhile, Chelsea progressed to the current stage after finishing runners-up in Group H behind Juventus.

Lille’s form and fortunes have nosedives this season, with the reigning Ligue 1 champions falling off a cliff following Christophe Galtier’s departure last summer. But Les Dogues have shown some improvement in the past month, with the defeat to Chelsea being their only loss in their previous six outings.

As for Chelsea, the last time they lost a game in regulation time was exactly two months ago, with Manchester City handing them a 1-0 defeat at the Etihad. And while the Blues have won their last four games in a row, their performances remain unconvincing, especially in the final third, with Thomas Tuchel’s charges hardly fluent in their forward movement. But issues off the field are likely impacting the west Londoners in more ways than one.

Chelsea and Abramovich in limbo: What do the UK government sanctions mean for the club?

As iterated earlier, the tie is delicately poised heading into the second leg despite Chelsea’s 2-0 win over Lille in the reverse fixture. Ahead of the latest meeting between the two sides, The Hard Tackle takes a closer look at the UEFA Champions League encounter.

Jocelyn Gourvennec has greeted a mixed bag of updates on the team news front ahead of the visit of Chelsea for the UEFA Champions League Round of 16 second leg. On Wednesday, the LOSC Lille manager will be without one first-team player.

The good news is that Benjamin Andre should be available after recovering from an illness. But Renato Sanches is a fresh absentee for Lille after sustaining a thigh injury this past weekend that has ruled him out until after the international break.

Andre should return to the starting eleven straight away, with Xeka likely to line up alongside him in the middle of the park. With Gourvennec expected to employ the 4-4-2 formation, the wide midfielders will have the onus on them to remain compact off the ball.

Gabriel Gudmundsson and Jonathan Bamba will be the wide midfielders for Lille, with the duo providing a direct threat during the offensive phases. Jonathan David and Burak Yilmaz will likely form the strike partnership for Lille, with the pair bringing a mix of youth and experience in the final third.

At the opposite end, Leo Jardim will likely take his place between the sticks, with Jose Fonte and Sven Botman pairing up at the heart of the Lille defence. Zeki Celik and Tiago Djalo will be the two full-backs, with the duo providing width in the final third whenever they bomb forward. 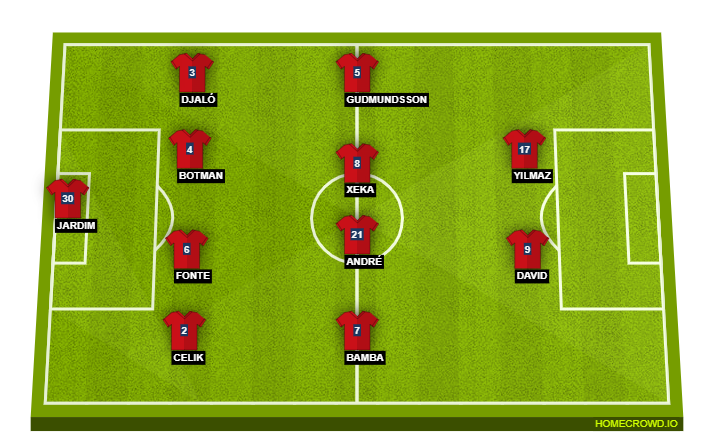 Unlike his counterpart in the Lille dugout, Thomas Tuchel does not have any new roster issue hampering his preparations ahead of the trip to Stade Pierre Mauroy. The Chelsea boss will likely be without only two first-team players on Wednesday.

The good news is that four first-team players are available after recovering enough fitness to resume training. Cesar Azpilicueta, Marcos Alonso, Reece James and Callum Hudson-Odoi could all be in contention to feature, with Azpilicueta and Alonso in line to start as the two wing-backs.

James will thus only likely be an option on the bench, with Chelsea captain Azpilicueta starting on the right flank. N’Golo Kante and Mateo Kovacic should form the double-pivot in midfield as Tuchel reverts to his preferred 3-4-3 formation.

Kai Havertz is the in-form player for Chelsea heading into the Champions League contest, and the German international should lead the line again versus Lille. Hakim Ziyech and Christian Pulisic should be the two wide-attackers, with Mason Mount dropping to the bench.

There is no looking past Edouard Mendy at the opposite end in the Chelsea goal. Thiago Silva, Andreas Christensen and Antonio Rudiger should form the central defensive partnership, meaning Trevoh Chalobah and Malang Sarr will likely drop to the bench. 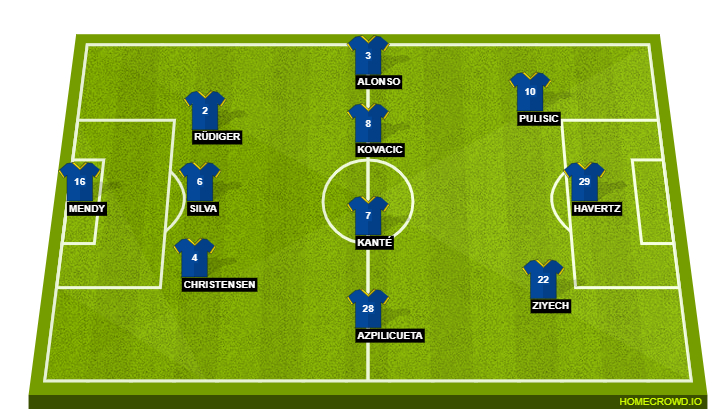 The striker’s slot at Chelsea has been yearning for stability ever since Diego Costa departed Stamford Bridge a few years ago. Tammy Abraham has since been the most consistent of all the players deployed as a centre-forward. And while Romelu Lukaku was touted to be the long-sought solution to spearhead the Chelsea attack, it is Kai Havertz who has risen to the occasion lately.

With Lukaku struggling to settle down in his second coming at Chelsea and linked with several clubs outside England, Havertz has grabbed his opportunity with both hands. With the German international becoming more prolific with each passing game, he is the new go-to man for Thomas Tuchel. And Havertz will need to be at his clinical best to see Chelsea through to the UEFA Champions League quarter-finals.

Chelsea’s off-field issues have invariably impacted performances on the pitch. But Thomas Tuchel has galvanised his unit superbly, with the Blues showing the fighting spirit that champions are made of. The game against Lille should help them showcase the same quality again.

The hosts will make a contest out of what seemed like a foregone conclusion last month. But Kai Havertz should rise to the occasion again, delivering the goods for Chelsea at the end of a closely-fought clash. The Hard Tackle predicts a 2-1 victory for Tuchel’s charges, enabling them to reach the UEFA Champions League quarter-finals.