Real Madrid will hope to maintain their stronghold on the La Liga summit when they take on RCD Mallorca at the Visit Mallorca Stadium on Monday.

The curtains will fall on Matchday 28 of the 2021/22 La Liga season on Monday, with a game that will have major implications on either end of the table. Real Madrid will lock horns with RCD Mallorca as they make the trip to the Visit Mallorca Stadium.

RCD Mallorca’s fortunes have suffered an untimely dip in the past month. Los Piratas have lost their last four games, which has undone the good work from a reasonably strong start to the year. The latest run of results has sent Mallorca dropping down to 16th in the La Liga standings, with 18th-placed Cadiz only two points behind them.

On the other hand, Real Madrid’s campaign continues to go from strength to strength, with the latest success coming in the brilliant 3-1 comeback win over Paris Saint-Germain earlier this week. Back home, the Merengues have been edging closer to reclaiming the La Liga crown, with Sevilla six points behind them, having played a game more.

The reverse fixture witnessed a 6-1 demolition of RCD Mallorca, with Marco Asensio scoring a hat-trick, while Karim Benzema and Isco were also on target for Real Madrid. Ahead of the latest meeting between the two sides, The Hard Tackle takes a closer look at the encounter.

Luis Garcia Plaza has several pressing roster issues hampering his preparations ahead of the visit of Real Madrid. On Monday, the RCD Mallorca manager will be bereft of the services of four first-team players.

Manolo Reina and Rodrigo Battaglia will miss out against Real Madrid due to their respective one-match suspensions. Dominik Greif is unavailable after testing positive for COVID-19, while Inigo Ruiz de Galarreta is sidelined due to a season-ending knee injury.

Garcia will line his side up in his preferred 4-2-3-1 formation, with the two central midfielders having the onus on them to contain the threat of Luka Modric. Sergio Rico will take his place in the Mallorca goal, with the back four likely to remain compact for the most part.

Antonio Raillo and Martin Valjent will pair up at the heart of the Mallorca defence, with Pablo Maffeo and Jaume Costa being the two full-backs. Up ahead in midfield, Salva Sevilla and Iddrisu Baba will form the double-pivot, with the duo aiming to keep things tight in the middle of the park.

Takefusa Kubo, eligible to play against parent club Real Madrid, will be the man under the spotlight for Mallorca, with the young Japanese forward looking to be direct in his approach. Dani Rodriguez will likely be deployed on the opposite flank, with Vedat Muriqi poised to spearhead the Mallorca attack against Real Madrid. 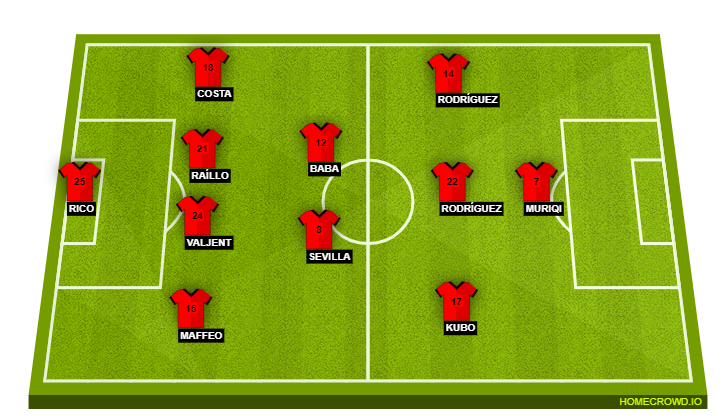 Unlike his counterpart in the RCD Mallorca dugout, Carlo Ancelotti does not have any team news issues to contend with ahead of the trip to the Visit Mallorca Stadium. On Monday, the Real Madrid manager will have a full-strength squad at his disposal.

Ancelotti had been sweating over the fitness of Eder Militao, Nacho and Karim Benzema after the trio sustained knocks against Paris Saint-Germain. But all three players are fit and available to take on Mallorca and are a part of the travelling squad.

Thibaut Courtois will take his usual place between the sticks on Monday, with Real Madrid lining up in their preferred 4-3-3 formation. Eder Militao and David Alaba will form the central defensive partnership, with Ferland Mendy returning to the left-back berth, while Dani Carvajal is a certain starter on the opposite flank.

Up ahead in midfield, Casemiro should return to the starting eleven, even though a yellow card will keep him out of next weekend’s El Clasico. Casemiro will sit at the base of the midfield trifecta, with Luka Modric and Eduardo Camavinga likely to slot in alongside the Brazilian.

Ancelotti’s tricky decision will pertain to the attacking unit. Although Vinicius Jr. and Benzema are automatic picks, the right-wing berth is up for grabs. Former Mallorca forward Marco Asensio will likely get the nod over Rodrygo Goes and others, especially following a hat-trick in the reverse fixture. 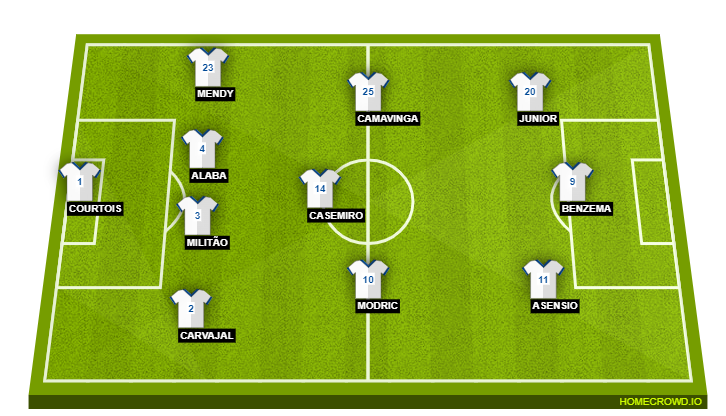 The going has been tough for Eduardo Camavinga at Real Madrid. But despite some rumours of being unsettled at the Santiago Bernabeu, the young French midfielder seems to be happy and willing to fight for his place in the side.

With Toni Kroos only recently recovering from a hamstring issue, Camavinga could get a chance to impress against a lowly RCD Mallorca side. And Monday’s game could be his opportunity to show that he has a lot to offer and can be a part of a glorious present for Real Madrid instead of just being the future of their midfield.

Real Madrid would know from their most recent trip to the Visit Mallorca Stadium that RCD Mallorca should not be taken lightly. Los Piratas have not been in the best run of form lately, but they are capable of springing a surprise, especially if the Merengues let their guard down following their big win over Paris Saint-Germain.

But with the La Liga title within their sight, Carlo Ancelotti’s men should produce a professional display to cruise to a win on Monday. The Hard Tackle predicts Real Madrid to clinch a 3-0 victory over RCD Mallorca on Monday.