Barcelona will look to continue their recent winning run when they take on Elche at Estadio Manuel Martinez Valero on Sunday.

Matchday 27 of the 2021/22 La Liga season continues on Sunday, with four games on show on the day. Barcelona will be one of eight teams in action when Elche play hosts to the Blaugrana at Estadio Manuel Martinez Valero, with three points of utmost importance for both sides at stake.

Elche retained top-flight status for the 2021/22 season by the skin of their teeth last term, finishing 17th, two points ahead of SD Huesca. Los Franjiverdes have been much improved in the ongoing campaign, amassing 29 points from 26 games to sit at the 13th spot on the La Liga table. But the threat of relegation is still looming, although they are closer to the top half of the standings than the drop zone.

On the other hand, Barcelona’s form and fortunes have significantly improved after a slow start to life under Xavi Hernandez. The Catalan giants are currently on a seven-game unbeaten run and have won their last three matches, scoring four goals in each outing. As a result, a top-four finish appears likely for the Blaugrana, although only four points separate third-placed Real Betis from seventh-placed Villarreal.

The reverse fixture was a riveting affair, wherein Barcelona eked out a 3-2 win over Elche, with Nico Gonzalez scoring a late winner to clinch all three points.

Francisco Rodriguez has one new roster issue hampering his preparations ahead of the visit of Barcelona. On Sunday, the Elche manager will be without the services of four first-team players due to suspension and injuries.

Gerard Gumbau is the latest absentee for Elche after being sent off against Levante last weekend. In addition to Gumbau, Helibelton Palacios (hamstring), John Donald (ankle) and Javier Pastore (muscle injury) are also sidelined due to their respective fitness issues.

Raul Guti will come into the starting eleven in place of the suspended Gumbau, looking to keep things tight in the middle of the park along with Omar Mascarell. The central midfield duo will aim to line up in a disciplined bank of four, with Tete Morente and Pere Milla being the two wide men.

Milla is the in-form player for Elche, having been directly involved in eight of their last 14 goals in La Liga, scoring six and assisting two. He has had a hand in more goals than any other teammate in the competition under Francisco. Milla will thus provide a direct threat from the left flank, getting into dangerous scoring areas in the process.

The two strikers, Lucas Boye and Guido Carrillo, will depend heavily on service from the flanks, and a disciplined showing from Barcelona might render them anonymous on Sunday. The second bank of four will aim to close down the half-spaces at the back to leave Barcelona’s creative midfielders devoid of options.

Enzo Roco and Pedro Bigas will pair up at the heart of the Elche defence, with Antonio Barragan and Johan Mojica being the two full-backs. The wide duo will largely be pinned back during Barcelona’s offensive phases but will not have a one-dimensional role, with the two responsible for providing width in the final third. Edgar Badia will be stationed in the Elche goal on Sunday. 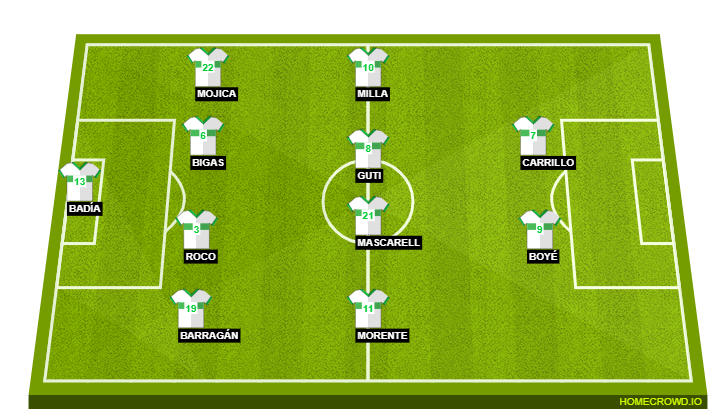 Unlike his counterpart in the Elche dugout, Xavi Hernandez does not have many pressing injury concerns to deal with ahead of the trip to Estadio Manuel Martinez Valero. The Barcelona boss will be without four first-team players on Sunday.

The major absentee for Barcelona is Ansu Fati, who is still recovering from a long-term hamstring injury. In addition, Alejandro Balde (ankle), Samuel Umtiti (foot), and Sergi Roberto (thigh) are also on the sidelines, with none of the players likely to return before the international break.

Xavi talks about the difficulty of facing Elche on the road:#ElcheBarça pic.twitter.com/YlTIJJtQxU

Barcelona will line up in their trademark 4-3-3 formation, with Xavi paying special attention to quick interplays between the players. Exploiting the half-spaces will hold the key for the visitors, making creative midfielders Frenkie de Jong and Pedri the pivotal figures for them.

At the same time, Barcelona will have a multi-faceted outlook in their offensive phases, with the wide-attackers being direct in their approach. Ousmane Dembele, in particular, will aim to continue from where he left off last weekend against Athletic Bilbao, looking to take on Johan Mojica.

Memphis Depay will line up on the left flank, making a long-awaited return to the starting eleven after scoring in his comeback game. Pierre-Emerick Aubameyang will spearhead the Barcelona attack again, with the former Arsenal captain looking to continue his brilliant form with the Blaugrana.

Nico Gonzalez, meanwhile, will likely sit at the base of the Barcelona midfield, with Sergio Busquets in line for a rest ahead of the crucial UEFA Europa League clash against Galatasaray. As for the defensive unit, Ronald Araujo and Gerard Pique will pair up at the heart of the Barcelona backline, with Dani Alves and Jordi Alba being the two marauding full-backs. Finally, Marc-Andre ter Stegen will start between the sticks. 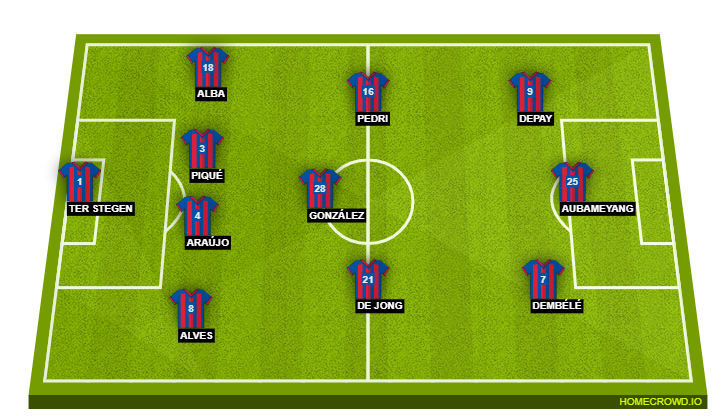 A lot has been said and written about Ousmane Dembele ever since news broke that talks over a contract renewal between him and Barcelona had reached a point of no return. Barcelona fans even booed Dembele in his first appearance since the end of the January transfer window.

But the French international has received plenty of support from Xavi Hernandez, who maintains that the player is a thorough professional. Dembele repaid Xavi’s faith by producing an excellent man of the match performance against Athletic Bilbao. He will hope to continue his solid run of form with another influential display, this time versus Elche CF. All eyes will thus be on Dembele and how he goes about Sunday’s outing.

Sunday’s match pits two of the most in-form teams in La Liga at Estadio Manuel Martinez Valero. Barcelona and Elche feature in the top five for most points amassed in the Spanish top-flight in 2022, with the visitors raking in 17 while the hosts have collected 14 in the same period.

But Barcelona’s recent displays have shown that they have no regard for the opposition’s form, producing their three best performances of the season. That is likely to be the case again on Sunday, with the Blaugrana blowing their hosts out of the park in the first half to put the game to bed. But Elche will not go down without a fight, scoring once before the game ends in a convincing win for Barcelona.