Crystal Palace will target a place in the FA Cup quarter-finals when they welcome Stoke City at Selhurst Park on Tuesday.

Crystal Palace will brace themselves for a third consecutive lower league opposition in the FA Cup when they play hosts to Stoke City at Selhurst Park on Tuesday night. The Eagles have beaten Millwall and Hartlepool to reach the fifth round. They now aim to take a step forward and enter the quarter-finals.

Patrick Vieira’s men have had a mixed recent run in the Premier League. After a stunning victory over Watford, they could only manage a 1-1 draw at home against Burnley. The result left Crystal Palace still in with a shout to finish in the top half, and now they can switch their attention to the Cup tie. Having never won the FA Cup in their history, Crystal Palace have big aims for this season in the competition.

Stoke have been struggling all season, and the FA Cup has been a welcome distraction for their fans this term. The Potters are on a terrible run and have remained without a win since February 8, drawing two and losing two games in that period.

During their journey in the FA Cup so far, Stoke have beaten Leyton Orient and Wigan Athletic in the last two rounds. But they have a poor record in away games of this tournament, as they are winless in their previous four matches. The Hard Tackle now takes a closer look at the encounter.

A night in the cup 🤩#CPFC | @EmiratesFACup

Patrick Vieira does not have much problems with his squad. The manager will look to give some of his fringe stars a run out on the field. He could also rest some of his regulars from the Premier League side, which could be needed, considering there are important games ahead.

Martin Kelly, Cheikhou Kouyate, Eberechi Eze and Jordan Ayew could all be vying for a starting spot against Stoke City. Although Conor Gallagher could keep his place in midfield, Vieira will look to rest some of his key attacking stars, such as Wilfried Zaha and Michael Olise.

Christian Benteke could also be in contention to lead the line, with Jean-Philippe Mateta likely to make space for the Belgian international. Meanwhile, Marc Guehi should keep his place in defence, while Will Hughes and Kouyate will be the other members alongside Gallagher in the midfield three.

Eze and Ayew could be the wide-attackers in the front three, with viable options on the bench if needed. Even with many first-teamers likely to be rested, Crystal Palace still have the better team to sweep past Stoke City. 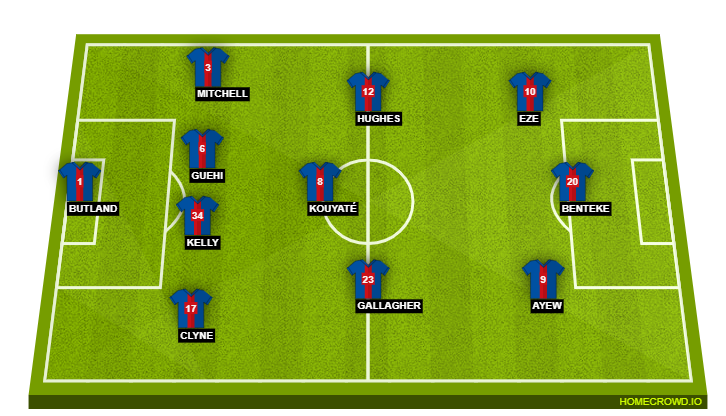 Michael O’Neill has many problems to deal with before the Crystal Palace clash. As many as six players are out of contention. Harry Souttar, Mario Vrancic, Romaine Sawyers and Abdallah Sima are injured. Morgan Fox’s red card against Bournemouth rules him out through suspension, while Jaden Philogene-Bidace is ineligible to compete.

Josh Maja and Sam Clucas came on as substitutes in the second half against the Cherries, and they should start the game against Crystal Palace. Meanwhile, Josh Tymon could come in to replace Morgan Fox at left wing-back.

O’Neill will stick with a back three and a midfield five, including wing-backs. Joe Allen is expected to marshall the midfield area in the anchor role. Maja and Nick Powell will lead the line upfront.

In the FA Cup clashes against Millwall and Hartlepool, Eze was a shining light in the final third, using his creative prowess and smart movement to good use, helping Crystal Palace on their way to good victories. Patrick Vieira has not preferred to use him in his Premier League sides, which is a cause of concern, although it could help the player ease into slowly after his long-term injury.

However, the FA Cup could become a good platform for the attacker to get his bearings right and put in performances to ease into the manager’s plans for league football. Eze will have to be sharp and ruthless against Stoke City and help his team advance to the next stage.

Crystal Palace come into the clash as clear favourites to progress as Stoke City struggle in away games. Having not won on any of their last four games on the road in recent weeks, the Potters are in for a tough time at Selhurst Park. Patrick Vieira’s men have the advantage to get a hold of proceedings and taking advantage of the visitors’ current misfortunes.

Vieira might start with many fringe players, who could prove very efficient compared to their Stoke City counterparts. Expect the London side to record a comfortable victory and also keep a clean sheet in the process, while the Potters are likely to go back empty-handed.