Liverpool will be eager to keep pace with Manchester City at the top of the Premier League table when they take on Burnley at Turf Moor on Sunday.

Gameweek 25 of the 2021/22 Premier League season will draw to a close on Sunday, with four matches on show. The action on the day will begin with three simultaneously played games, with Burnley playing hosts to Liverpool at Turf Moor in one of those fixtures.

The 2021/22 season has been one to forget for Burnley. The Clarets have won just one of their 20 games thus far this term, amassing 14 points in the process. That tally puts leaves them rock-bottom in the top-flight, although Newcastle United are only four points clear, with the Magpies playing two games more.

On the other hand, inconsistency has crept into Liverpool’s gameplay after a strong start to the campaign. While the Reds remain the most eye-catching team in the Premier League, having scored 60 goals in 23 games thus far. Jurgen Klopp’s men are currently on a five-game winning run, with the latest success coming in a 2-0 victory over Leicester City.

Liverpool beat Burnley 2-0 in the reverse fixture, played at Anfield back in August, with Diogo Jota and Sadio Mane on target. Ahead of the latest meeting between the two sides, The Hard Tackle takes a closer look at the encounter.

🤕 The boss provides the latest on injuries and touches on Sunday's opponents in today's press conference 📹#BURLIV | #UTC pic.twitter.com/UfFLaVyTWe

Sean Dyche does not have any new injury concerns hampering his preparations ahead of the visit of Liverpool. On Sunday, the Burnley manager will be bereft of the services of three first-team players, with Charlie Taylor (ankle), Johann Berg Gudmundsson (appendicitis), and Matej Vydra (hernia) unavailable.

Dyche will line his team up in the usual 4-4-2 formation, with Nick Pope an automatic pick between the sticks. Ben Mee and James Tarkowski will pair up at the heart of the Burnley defence, with Connor Roberts and Erik Pieters being the two full-backs.

Up ahead in midfield, Ashley Westwood and Josh Brownhill will form a defensive partnership in the middle of the park. The duo will have the onus on them to keep a lid on Thiago Alcantara’s output while also looking to curb Jordan Henderson’s first-time long passes.

Dwight McNeil and Maxwel Cornet will be the two wide attackers who will provide a direct threat from the flanks. The duo will also have a lot riding on them defensively. Finally, Wout Weghorst and Jay Rodriguez will form the strike partnership, with the former being an imposing presence in the air. 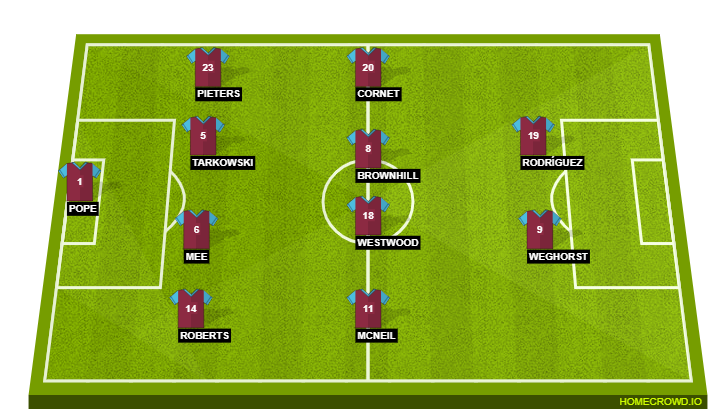 Unlike his counterpart in the Burnley dugout, Jurgen Klopp has no roster issues to contend with whatsoever ahead of the trip to Turf Moor. The Liverpool manager will have a full-strength squad at his disposal on Sunday.

Alisson Becker will take his usual place in goal, with Liverpool lining up in a 4-3-3 formation versus Burnley. Joel Matip and Virgil van Dijk pick themselves in the central defensive partnership, with Trent Alexander-Arnold and Andrew Robertson being the two full-backs.

We’re LIVE with the boss Jürgen Klopp ahead of Sunday’s trip to Turf Moor! https://t.co/Vy0WDrvS7o

Alexander-Arnold and Robertson will carry the bulk of the creative responsibility on their shoulders while receiving support from Thiago Alcantara. Speaking of Thiago, the Spanish international will start alongside Jordan Henderson and Fabinho in the middle of the park, with the trio forging a solid midfield partnership.

Mohamed Salah is in line to return to the starting eleven after coming off the bench against Leicester City earlier this week. The Egyptian international’s pace and trickery could be a lot for Erik Pieters to contain.

Diogo Jota and Luis Diaz were impressive in the midweek fixture, with the duo likely to start again versus Burnley. Jota and Diaz’s selection means Sadio Mane and Roberto Firmino will be backup options, with the former likely to be buoyant after winning the Africa Cup of Nations with Senegal. 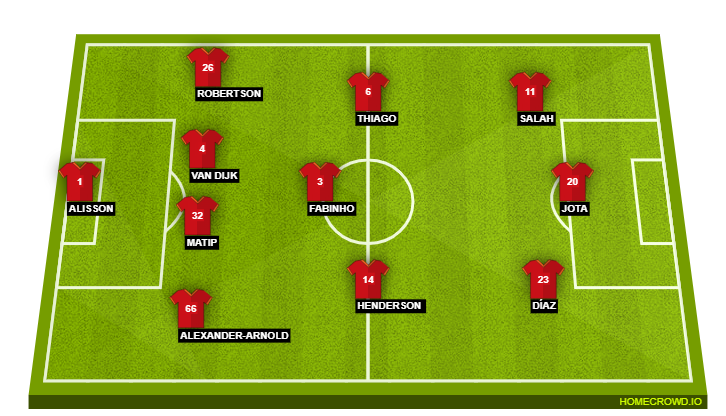 The past week has been quite eventful for Mohamed Salah, who nearly went all the way with Egypt in the Africa Cup of Nations. The 29-year-old looked to quickly put the disappointment of the heartbreak in the final by making his mark against Leicester City a couple of days ago but could only smash the woodwork with a brilliant curler.

Salah will now be desperate to get back to scoring ways against Burnley, take his Golden Boot bid back on track and put Liverpool firmly in contention to win the Premier League title. Burnley will not make things easy for his team, but Salah has the game-changing ability to thwart the Clarets’ stubborn defence.

Burnley might have managed just one win all season thus far, but the 11 draws they have been a part of point towards the Clarets’ stubbornness. But Liverpool will fancy their chances of claiming all three points despite the tricky nature of the game.

Mohamed Salah will be a man on a mission after suffering heartbreak at the Africa Cup of Nations, which showed in the match against Leicester City. The Egyptian wing-wizard will make a telling impact on Sunday, possibly scoring both the goals to clinch a 2-0 win for Liverpool.