Manchester City will hope to consolidate their place atop the Premier League table when they take on Southampton at St. Mary’s Stadium on Saturday.

The international break is nearly upon us, but plenty of club football is to be played before then. Gameweek 23 begins in the Premier League this weekend, with the action on Saturday culminating at St. Mary’s, where Manchester City will be locking horns with Southampton.

Southampton may have lost their most recent fixture 3-1 at the hands of Wolverhampton Wanderers, but they have been on a roll of late. The Saints have been steadily improving after a slow start to the season, winning five domestic games on the trot before the loss to Wolves. The run of results has helped them climb up to 12th on the Premier League table, ten points clear of 18th-placed Norwich City.

On the other hand, Manchester City’s 2021/22 campaign bears a close resemblance to last season. The Citizens are again the runaway leaders in the Premier League, with a consistent run of results enabling them to pull clear of their title rivals. Pep Guardiola’s men are currently perched atop the standings, with nearest challengers Liverpool 11 points behind them.

The reverse fixture played at the Etihad back in September ended in a goalless stalemate, with Southampton and Manchester City managing three shots on target between them. Ahead of the latest meeting between the two sides, The Hard Tackle takes a closer look at the encounter.

Hear from the boss 🗣

Ralph Hasenhüttl addresses the media ahead of #ManCity's visit to St Mary's: https://t.co/g33bRTgYK8

Ralph Hasenhuttl has been handed a boost on the team news front ahead of the visit of Manchester City. On Saturday, the Southampton manager will be without the services of four first-team players, with two squad members returning to his disposal.

Theo Walcott and Mohamed Elyounoussi are in contention to feature after testing negative for COVID-19. Alex McCarthy (hamstring), Will Smallbone (calf) and Valentino Livramento (knee) remain sidelined due to their respective injuries, while Moussa Djenepo is at the Africa Cup of Nations, representing Mali.

Hasenhuttl should set his side up in a 3-5-2 formation, which will be a defensive setup in its very essence. The two wing-backs will largely drop deep to create a back five during the defensive phases, with the three central midfielders also retaining a largely pragmatic outlook.

Southampton will thus be set up to play on the counter-attack, which means the in-form Armando Broja will need to be clinical on Saturday. Fraser Forster will take his place in goal, with Jan Bednarek, Lyanco and Mohammed Salisu being the three centre-backs against Manchester City.

Kyle Walker-Peters and Romain Perraud will likely be the two wing-backs, with the duo being tasked with providing the width higher up the pitch. The wing-backs will flank Ibrahima Diallo, Oriol Romeu and James Ward-Prowse in Southampton’s second line of press.

Ward-Prowse has been scoring free-kicks for fun lately and will pose a great deal of threat during set-piece situations. Finally, Armando Broja and Che Adams will form the strike partnership for Southampton, with the two looking to hit Manchester City on the break with electric runs. 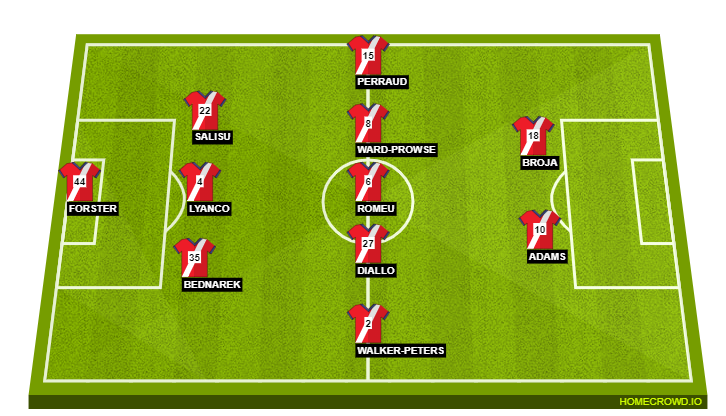 Unlike his counterpart in the Southampton dugout, Pep Guardiola barely has any players on the sidelines ahead of the trip to St. Mary’s Stadium. While Liam Delap is inching closer to his return, Riyad Mahrez is likely to miss out despite returning from the Africa Cup of Nations following Algeria’s shock early ouster.

Other than that, Guardiola has a full-strength squad at his disposal, meaning Southampton could be in for a tough battle on Saturday. Manchester City will line up in their usual 4-3-3 formation, with the objective being to create openings through precision and ruthlessness.

Manchester City manager Pep Guardiola confirmed that Algeria captain Riyad Mahrez has a week long holiday after his country’s elimination from the 2021 Africa Cup of Nations.

Mahrez played every minute in the Desert Foxes' underwhelming campaign at #Afcon2021 pic.twitter.com/MrG2CMgG6c

Ederson Moraes will take his place between the sticks, with Ruben Dias and John Stones forming the central defensive partnership. Kyle Walker and Joao Cancelo will likely be the two full-backs, with Cancelo, in particular, posing a major creative threat from the left flank.

Up ahead in midfield, Ilkay Gundogan is likely to return, with the German playmaker and Kevin De Bruyne being the two players who will aim to push Manchester City forward at every opportunity. Rodri will sit at the base of the midfield, hoping to keep things tight in the middle of the park.

Gundogan’s return could prompt Guardiola to deploy Bernardo Silva higher up the pitch. That will allow the Portuguese international to get into scoring positions, with Phil Foden and Raheem Sterling likely to be Silva’s attacking partners on Saturday. 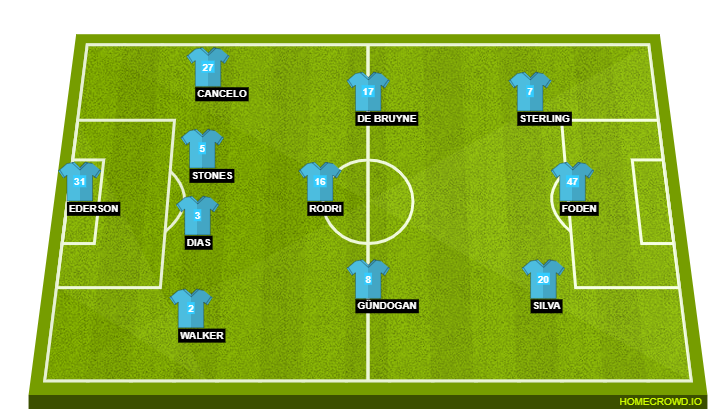 It is fair to say that Sterling did not make the best of starts to the 2021/22 campaign. The English international’s place in the Manchester City squad was far from secure, with a possible move to Barcelona also being mooted.

But Sterling has stepped his game up several notches in the last few weeks and has started regularly despite Pep Guardiola’s tendency to rotate his troops heavily. And if the performance against Chelsea last week is anything to go by, Sterling is slowly but surely getting back to his best. A solid showing against a stubborn Southampton is thus imperative for Sterling’s star to continue ascending.

Southampton can be a tough nut to crack, especially at home, where they tend not to lose many games. But the Saints are encountering the most in-form team in Europe up next, and a win is a highly unlikely outcome, even though Ralph Hasenhuttl will be setting his side up in a pragmatic setup.

Raheem Sterling will have a lot to say in the proceedings again, and the Englishman, who enjoys scoring against Southampton, will make all the difference in the end. The Hard Tackle predicts a hard-fought 1-0 win for Manchester City, with the result enabling them to open up a 14-point cushion to Liverpool before the Reds’ game against Crystal Palace on Sunday.