A place in the Carabao Cup final will be up for grabs when Arsenal and Liverpool face off at the Emirates in the semi-final second leg on Thursday.

Just two more games remain for the Carabao Cup champions to be crowned. With Chelsea waiting to find who they will be facing next month, the second finalist will be confirmed on Thursday night, when Arsenal will play hosts to Liverpool at the Emirates in the second leg of their semi-final.

The turn of the year has been tumultuous for Arsenal, with two of their games rescheduled due to the ridiculous waves of postponements affecting the Premier League. The Gunners are yet to clinch their maiden win in 2022, losing back-to-back games to start the new year before playing out a creditable goalless draw with Liverpool in the first leg last week.

Like Arsenal, Liverpool’s start to the new year has been anything but kind. But unlike their hosts, the Reds are yet to lose a game in 2022, winning two and drawing two of their four games thus far. The most recent of these fixtures ended in a 3-0 win over Brentford, a result that should buoy the visitors heading into the Carabao Cup semi-final second leg.

As iterated earlier, Liverpool and Arsenal played out a goalless draw in the first leg last week, with the most notable moment being Granit Xhaka’s dismissal. Ahead of the latest meeting between the two sides, The Hard Tackle takes a closer look at the encounter.

💬 "We're going to put out the strongest team that we can with only one intention; after the final whistle, we are at Wembley and playing in the final."

Mikel Arteta has a raft of roster issues hampering his preparations ahead of the visit of Liverpool. After successfully having the North London Derby postponed due to the fitness concerns in his squad, the Arsenal manager will be bereft of the services of eight first-team players on Saturday.

The good news is that Calum Chambers, Kieran Tierney and Bukayo Saka have shrugged off their minor fitness issues to resume training this week. The three players will likely make the starting eleven, with Chambers and Tierney expected to start as the two full-backs, while Saka will reprise his usual role on the right flank.

In another piece of good news, Martin Odegaard has been back in training after testing negative for COVID-19. The Norwegian playmaker should be back in the side straight away, joining Saka and Gabriel Martinelli in the final third. The trio will supplement Alexandre Lacazette, who will spearhead the Arsenal attack against Liverpool.

As for the bad news, Takehiro Tomiyasu and Emile Smith Rowe are yet to resume training, while Granit Xhaka is suspended after his petulant kick on Diogo Jota earned him a straight red card. With Thomas Partey yet to return since Ghana’s early elimination from the Africa Cup of Nations, Albert Sambi Lokonga is the only recognised central midfielder at Arteta’s disposal.

The Arsenal boss could give young Charlie Patino a chance to impress. But Ben White will likely start alongside Lokonga in the double-pivot, having reprised a midfield role several times at Brighton & Hove Albion.

White’s deployment in midfield essentially means Gabriel Magalhaes will have Rob Holding as his central defensive partner. Finally, Aaron Ramsdale should get the nod ahead of Bernd Leno in the Arsenal goal, considering the fixture’s importance. 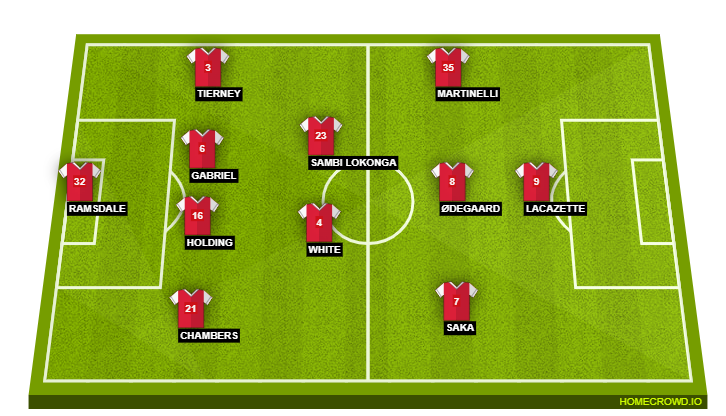 Like his counterpart in the Arsenal dugout, Jurgen Klopp has a slew of personnel availability concerns to deal with ahead of the trip to the Emirates. On Saturday, the Liverpool manager will be without eight first-team players.

The major absentees for Liverpool continue to be the two attacking stalwarts, Mohamed Salah and Sadio Mane, who are at the Africa Cup of Nations. The other players on the sidelines are Nathaniel Phillips (head), Thiago Alcantara (hip), Harvey Elliott (ankle), Naby Keita (AFCON), Alex Oxlade-Chamberlain (knock) and Divock Origi (knee), although Elliott has recently resumed training.

Klopp is short-changed in most departments heading into the Carabao Cup semi-final second leg, meaning most of the players in the starting eleven pretty much pick themselves.

Takumi Minamino, Roberto Firmino and Diogo Jota will combine in the attacking trifecta, with the trio forming a fluid offensive partnership. Behind them, Jordan Henderson, Fabinho and Curtis Jones will likely be the three midfielders, with James Milner an option on the bench.

Fabinho will sit at the base of the midfield, with Henderson and Jones being the workhorses in the middle of the park. Joel Matip and Virgil van Dijk should pair up at the heart of the Liverpool defence, with Andrew Robertson and Trent Alexander-Arnold being the two full-backs.

As ever, the full-back pairing will carry the bulk of the creative threat for Liverpool and will hope to do a much better job permeating through the Arsenal defence than the first leg. Finally, Alisson Becker should start between the sticks to make only his second-ever Carabao Cup appearance, with Caoimhin Kelleher sitting on the bench again. 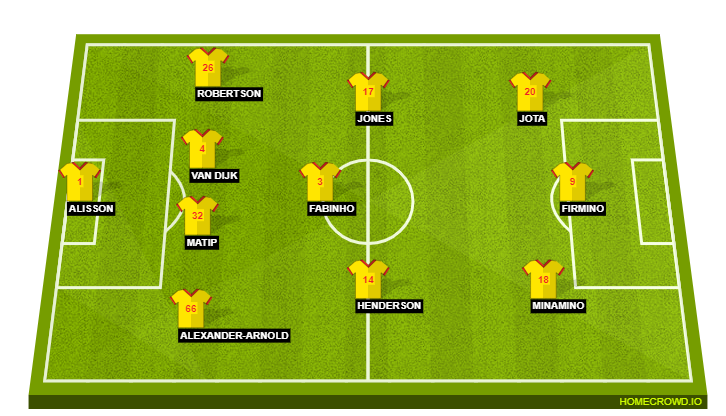 The absence of Mohamed Salah and Sadio Mane was supposed to cripple Liverpool greatly this month. But, as it has turned out, apart from their struggles against Arsenal in the Carabao Cup semi-final first leg, the Reds have largely come through unscathed, with Takumi Minamino, in particular, taking advantage of the rare Premier League opportunity against Brentford.

The onus is now on the Japanese international to continue his good run of form in the Carabao Cup against Arsenal. After all, Minamino first made a name for himself this season by proving himself to be the cup specialist for Liverpool. Another influential display could be the difference between a finals berth and a ticket back home from the penultimate stage.

If there is one club that seems to have Arsenal’s number no matter what, it is Liverpool Football Club. But, with several key players missing for both teams, one can expect a keenly-contested affair that will have plenty of fireworks on display.

With a place in next month’s Carabao Cup final on the line, the second leg should be a more open game, with both teams laying it all on the line to progress to the finale. But Liverpool’s superior defensive strength should keep them in good stead. At the opposite end, Takumi Minamino will produce another special cup performance, this time to book a place in the final against Chelsea.