The Premier League title race could take a fresh twist when Manchester City and Chelsea face off at the Etihad on Saturday.

The games continue to come thick and fast in England, with Gameweek 22 of the 2021/22 Premier League season kicking off this week with the match between Brighton and Crystal Palace on Friday. The action continues on Saturday, with Manchester City and Chelsea playing the day’s first game.

Much like last season, Manchester City are becoming the Premier League’s runaway leaders at the turn of the year. The second half of the season is only two gameweeks in, and the Citizens are already ten points clear of second-placed Chelsea. Pep Guardiola’s men have been on a tear lately, winning their last seven games across all competitions.

On the other hand, Chelsea have gone from the clear leaders in the Premier League title race to the front of the chasing pack. The Blues have dropped points in seven of their last 11 top-flight games, turning a five-point lead over Manchester City into a ten-point deficit. However, Thomas Tuchel’s charges will be buoyed by their most recent result, a 1-0 win over Tottenham Hotspur that clinched a place in the Carabao Cup final.

The reverse fixture, played at Stamford Bridge in September, saw Manchester City eke out a 1-0 win, with Chelsea producing a listless performance. Ahead of the latest meeting between the two sides, The Hard Tackle takes a closer look at the encounter.

PEP 💬 Are you saying that we're the smartest? That omicron doesn’t come to visit us? We had a lot of cases and injuries. We played Aston Villa with 11 first team players. The last five games we played academy players on the bench. We're in the same situation as all other clubs.

Pep Guardiola has new roster issues hampering his preparations ahead of the visit of Chelsea. On Saturday, the Manchester City manager could be bereft of the services of at least six first-team players in the wake of fresh coronavirus cases at the club.

The major absentees for Manchester City are Phil Foden (COVID-19) and Riyad Mahrez, who is at the Africa Cup of Nations, representing Algeria. However, John Stones could be in contention to feature after shrugging off a knock he sustained recently.

But Stones is unlikely to feature at the heart of the Manchester City defence, with Aymeric Laporte and Ruben Dias expected to form the central defensive partnership. Out wide, there is no looking past, Kyle Walker and Joao Cancelo as the two full-backs, while Ederson Moraes will be stationed in goal.

Up ahead in midfield, Fernandinho could miss out, with Rodri likely to reprise the holding midfield role. The Spanish international will receive defensive support from Ilkay Gundogan and Kevin De Bruyne, with the two playmakers also in charge of carving out the openings higher up the pitch.

With Foden likely to miss out due to his positive coronavirus test, Jack Grealish will get a golden opportunity to impress. In the final third, the English international will start alongside Bernardo Silva and Gabriel Jesus, with Guardiola not having many alternatives on the bench. 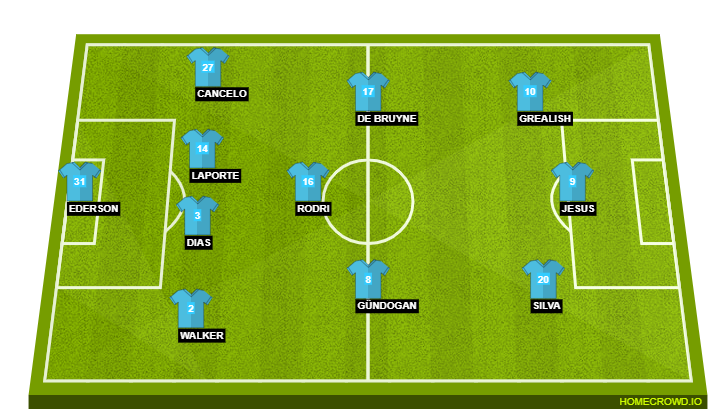 Like his counterpart in the Manchester City dugout, Thomas Tuchel has greeted unpleasant team news updates ahead of the trip to the Etihad Stadium. On Sunday, the Chelsea manager will have to do without five first-team players.

Andreas Christensen is the latest player to be sidelined after testing positive for coronavirus. The Danish international has joined Trevoh Chalobah (hamstring), Ben Chilwell (knee) and Reece James (hamstring), with Edouard Mendy in Cameroon representing Senegal at the Africa Cup of Nations.

In Mendy’s continued absence, Kepa Arrizabalaga will take his place between the sticks for Chelsea, who will line up in a 3-4-2-1 formation on Saturday. Cesar Azpilicueta, Thiago Silva and Antonio Rudiger should be the central defensive unit, with Malang Sarr dropping to the bench despite being impressive in the Carabao Cup win over Tottenham Hotspur.

The three centre-backs will aim to remain compact to shut off the half-spaces, which the Manchester City playmakers love to exploit. The wing-backs will come in use to contain the hosts’ two full-backs. Hakim Ziyech will thus need to put in the hard yards from the hybrid right wing-backs slot. On the left flank, there is no looking past Marcos Alonso.

N’Golo Kante will be available after recovering from COVID-19, but the Frenchman is unlikely to start, with Jorginho and Mateo Kovacic forming the central midfield pairing. Jorginho’s passing astuteness will come in handy to bypass the Manchester City midfielders on the counter-attack. At the same time, Kovacic will aim to harry Kevin De Bruyne and Ilkay Gundogan in the middle of the park.

Finally, Romelu Lukaku and Timo Werner should combine in the final third after showing promising signs linking up against Tottenham. The creative supremo for Chelsea will be Mason Mount, leaving Christian Pulisic and Kai Havertz as options on the bench. 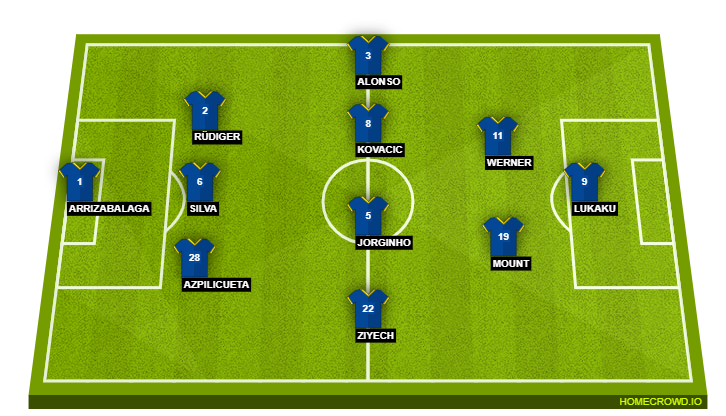 Hakim Ziyech has endured a hit-and-miss stint since joining Chelsea 18 months ago. While the Moroccan playmaker has shown many promising signs with his creative abilities, he has also been extremely inconsistent more often than not. However, a turnaround may be afoot after his recent deployment in the hybrid right wing-back role.

Ziyech has taken to the demands of the position like fish to water, with his probing passes between the half-spaces being a major source for concern for opposition defences. If Chelsea are to get past Manchester City and avoid a repeat of the reverse fixture, Ziyech’s creative nous will need to come to the fore.

Saturday’s game could be an evenly-contested affair that will have very little margin of error. The two teams possess the two most solid defensive units in the Premier League, meaning clear-cut chances will come few and far between.

If that were the case, the final result would boil down to the team that can finish off the chances in a prolific manner. And as has been the case on many occasions this season, Bernardo Silva could rise to the occasion and convert a pass that will definitively tip the scales in Manchester City’s favour. The Hard Tackle predicts a 1-0 win for the hosts, who will open up a 13-point lead to Chelsea as a result.