Manchester United will be hoping to make it two wins in two when they welcome Wolverhampton Wanderers to Old Trafford on Monday.

The action continues to come thick and fast in England, with Gameweek 21 of the 2021/22 Premier League season set to culminate on Monday. The final fixture of the latest round of fixtures will be played at Old Trafford, where Manchester United will play hosts to Wolverhampton Wanderers.

2021/22 promised to be a potential Premier League title-winning campaign for Manchester United, especially after the big-spending summer transfer window, which included Cristiano Ronaldo’s return. However, the season has unravelled horribly for the Red Devils, with Ole Gunnar Solskjaer no longer at the club. The struggles have continued under Ralf Rangnick, with the latest setback being the 1-1 draw with Newcastle United, although they did bounce back to winning ways against Burnley.

On the other hand, Wolverhampton Wanderers have been resurgent under the tutelage of Bruno Lage, and they have emerged as outside contenders for the UEFA Europa League qualification spot. While Wolves have won seven and lost seven of their 18 games thus far, they have been hard to beat, with only Manchester City conceding fewer goals than them.

The reverse fixture, played at the Molineux in August, saw Manchester United earning a hard-fought 1-0 over Wolves, with Mason Greenwood scoring an 80th-minute winner. Ahead of the latest meeting between the two sides, The Hard Tackle takes a closer look at the encounter.

Ralf Rangnick has been handed a major boost on the team news front ahead of the visit of Wolverhampton Wanderers. On Monday, the Manchester United interim boss will be bereft of the services of only two first-team players.

While Paul Pogba remains unavailable due to a hamstring injury, Victor Lindelof’s fitness is a major source of concern. However, the good news comes in the form of Bruno Fernandes’ availability, with the Portuguese international back at Rangnick’s disposal after serving his suspension.

Fernandes should be reinstated in the starting eleven by Rangnick, starting as one of the two attacking midfielders behind the two strikers. His playmaking partner should be Jadon Sancho, leaving Marcus Rashford and Mason Greenwood on the bench.

As for the two strikers, Cristiano Ronaldo and Edinson Cavani will likely retain their spots. With the next fixture being an FA Cup tie next weekend, Rangnick will have the chance to name his strongest eleven against Wolves. That means Scott McTominay and Fred should form the double-pivot in midfield, with Nemanja Matic dropping to the bench.

At the back, Luke Shaw’s promising form against Burnley will likely earn him another start, with Harry Maguire also expected to start alongside him. However, the other half of the Manchester United backline should see Diogo Dalot and Raphael Varane returning, with Aaron Wan-Bissaka and Eric Bailly making way. Finally, there is no looking past David de Gea in goal. 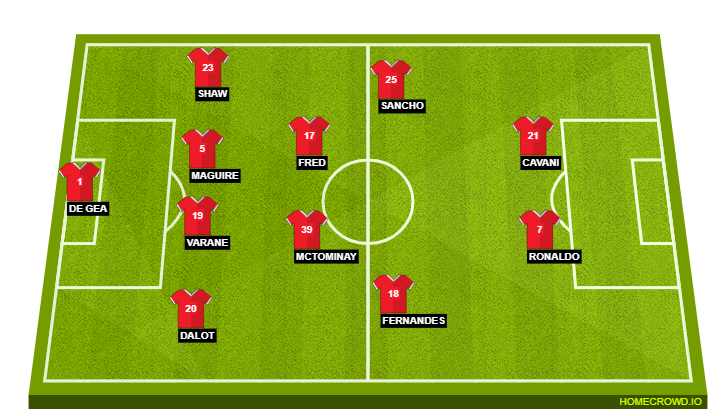 Unlike his counterpart in the Manchester United dugout, Bruno Lage has a lengthy absentee list ahead of the trip to Old Trafford. On Monday, the Wolverhampton Wanderers manager will be without several first-team players.

In particular, confusion reigns supreme when it comes to the identity of players unavailable due to the coronavirus outbreak at the club. However, Rayan Ait-Nouri (groin), Jonny (knee), Willy Boly (calf), Yerson Mosquera (hamstring), Pedro Neto (knee) and Hwang Hee-Chan (hamstring) are definitely out.

"Pedro Neto will return and start training in January. It takes five or six weeks to be fit to play." #wwfc

In addition, Romain Saiss is set to be unavailable for around a month due to his impending participation at the Africa Cup of Nations. However, the Moroccan international is available to take on Manchester United and will join Conor Coady and Max Kilman in the central defensive unit on Monday. The three centre-backs will cover Jose Sa in the Wolves goal.

Up ahead in midfield, Joao Moutinho and Ruben Neves will aim to be the thorn on Jadon Sancho and Bruno Fernandes’ side, with Nelson Semedo and Marcal likely to be the two wing-backs. They will be in charge of providing the width, especially with the three attackers largely staying compact.

Raul Jimenez will spearhead the Wolves frontline against Manchester United on Monday, with Daniel Podence and Francisco Trincao supplementing him if they are available, COVID-19 permitting. 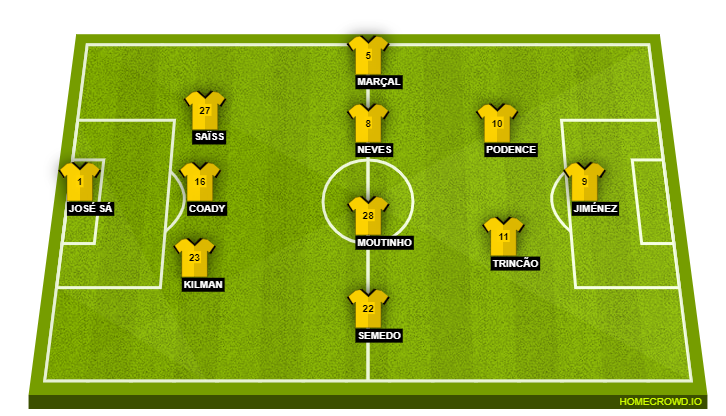 For much of his stint with Manchester United, Bruno Fernandes has been the single-most pivotal figure for the club. However, ever since Cristiano Ronaldo returned to the club, the Portuguese international has cultivated an undesirable trait that has drawn the ire of Manchester United legend Gary Neville.

Indeed, Fernandes’ tendency to lambast teammates on the pitch has adversely affected his own performances to a great extent, and he needs to revert to his old ways to rediscover his best touch. Generally speaking, though, Bruno Fernandes desperately needs to find his form again to inspire Manchester United to a top-four finish. A big showing against Wolves will go a long way in addressing such a concern.

Many of Manchester United’s games have been riddled with poor offensive output from the Red Devils, who have been too easy to contain at times. Monday’s fixture could follow a similar pattern, which is a given anyway, considering Bruno Lage has one of the best defensive units in the Premier League at his disposal.

At the other end, David de Gea will unlikely be kept busy in the Manchester United goal, with Wolves creating few chances. As the game progresses, the urge to find the winner will get increasingly desperate, and Manchester United could clinch that goal late on, with Cristiano Ronaldo finding the back of the net. The Hard Tackle predicts a 1-0 win for Ralf Rangnick & co.