Real Madrid will hope to retain their stronghold over the summit of La Liga when they take on Getafe at Coliseum Alfonso Perez on Sunday.

The 2021/22 La Liga season has resumed this week following the short winter break. Matchday 19 got underway with the game between Valencia and Espanyol on Friday, but most of the games will be played on Sunday. Getafe will host Real Madrid in the opening encounter on the day at the Coliseum Alfonso Perez.

Getafe’s 2021/22 campaign has been one to forget thus far, as they have won only three of their 18 games. As a result, the Azulones are currently 16th on the La Liga table, level on points with 18th-placed Deportivo Alaves. However, a run of five successive games without defeat in the top-flight had helped their case enormously ahead of the winter break.

On the other hand, Real Madrid have been the runaway leaders in La Liga this term, losing just one of their 19 games thus far. The Merengues have netted the most goals in the division and are currently eight points clear of second-placed Sevilla. Carlo Ancelotti’s men last faced defeat back in October and are one of the most in-form teams in Europe.

The corresponding fixture last season was a drab affair as Getafe and Real Madrid played out a goalless draw. Ahead of the latest meeting between the two sides, The Hard Tackle takes a closer look at the encounter.

Unlike several other managers in La Liga, Quique Sanchez Flores has not been beset by positive COVID-19 tests at all. Instead, the Getafe boss has only four first-team players unavailable due to various fitness issues.

As for team selection, Quique Sanchez Flores will likely deploy Getafe in a 3-5-2 formation, which will morph into a 5-3-2 during the defensive phases. In goal, David Soria is a certainty, with Stefan Mitrovic, Erick Cabaco and Jorge Cuenca forming the central defensive partnership in front of him.

Damian Suarez and Mathias Olivera will be the two wing-backs who will primarily be pinned back due to the sheer volume of attacking moves by Real Madrid. Up ahead, the onus of keeping things tight in the middle of the park will be on Nemanja Maksimovic.

Mauro Arambarri and Carles Alena will provide defensive support to Maksimovic, with the duo also reprising box to box roles. Finally, the Enes Unal and Sandro Ramirez will form the strike partnership for Getafe, with the pair likely to feed off scraps against Real Madrid. 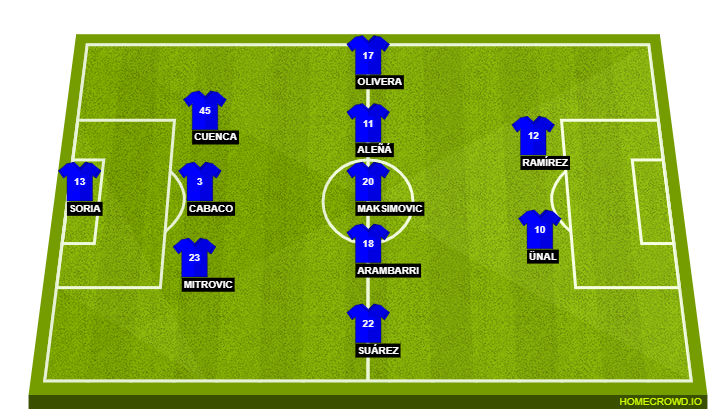 Unlike his counterpart in the Getafe dugout, Carlo Ancelotti has a few players missing due to positive COVID-19 results. In addition, the Real Madrid manager will also be bereft of the services of a couple of other players due to suspension and fitness issues.

Vinicius Junior will be the major absentee for Real Madrid after returning a positive test for the coronavirus. In addition, other key unavailable players include Dani Carvajal (calf) and Eduardo Camavinga (suspended).

The latest development has been brimming with good news, as several players have overcome COVID-19, including Thibaut Courtois, Luka Modric and David Alaba, among others. The trio will be a part of the starting eleven in what will be a strong side against Getafe.

Ancelotti will likely favour naming his first-choice central midfield trifecta. So, Casemiro will sit at the base of the midfield unit, with Luka Modric and Toni Kroos being the creative supremos for Real Madrid.

As ever, Karim Benzema will spearhead the Real Madrid attack, with Marco Asensio and Rodrygo Goes supplementing the Real Madrid talisman. Eden Hazard will be an option on the bench if required later in the game. 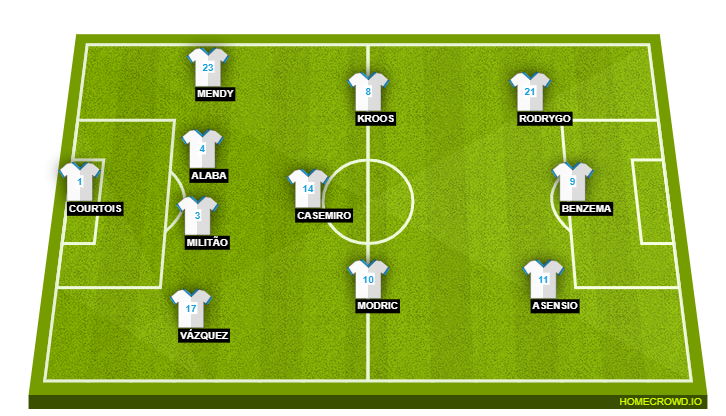 It is safe to say the Asensio has not enjoyed smooth sailing at Real Madrid since returning from a long injury layoff at the back end of the 2019/20 season. The last 18 months have been extremely difficult for the Spaniard, who has blown hot and cold alarmingly. However, recent weeks have pointed towards a resurgence.

The 25-year-old has been in decent touch in the last few games, and his influence is growing exponentially. However, with his Real Madrid future still uncertain, Asensio cannot afford any slip-ups. So, it remains to be seen if Asensio can continue his good run of form with a solid showing against Getafe.

With nearly all the COVID-19 scares surrounding Real Madrid ending with positive news, Carlo Ancelotti has been handed a major boost this weekend. Naming a strong starting eleven will enable the Real Madrid boss to pave the way for a hard-fought win.

The keyword here is “hard-fought”, and Getafe will make things hard for their visitors, as is usually the case with the Azulones. However, Karim Benzema’s irresistible form should inspire Real Madrid to clinch a 2-0 win and take them a step closer to reclaiming the La Liga title.