Chelsea will aim to progress to the Carabao Cup semi-finals when they take on Brentford at the Brentford Community Stadium on Wednesday.

The Carabao Cup returns for the first time since October, with the quarter-finals stage of the competition kicking off on Tuesday with the game between Arsenal and Sunderland. The other three games will be played simultaneously on Wednesday, with Brentford playing hosts to Chelsea at the Brentford Community Stadium.

Brentford began their Carabao Cup campaign in the second round, beating Forest Green 3-1. The Bees have since overcome Oldham Athletic and Stoke City in the subsequent stages to set up the quarter-final meeting with Chelsea. Speaking of Chelsea, the Blues’ games have lasted the distance, with Thomas Tuchel’s men getting past Aston Villa and Southampton on penalty shootouts.

Brentford’s recent form has been promising, with Thomas Frank’s charges losing just one of their last five games. On the other hand, Chelsea’s fortunes have taken a hit of late, as they have won only one of their most recent five matches, with Everton and Wolverhampton Wanderers holding the west Londoners to stalemates in the past week.

Brentford and Chelsea have already locked horns once this season, with the Blues claiming a hard-fought 1-0 win, courtesy of a goal by Ben Chilwell. Ahead of the latest meeting between the two sides, The Hard Tackle takes a closer look at the encounter.

"It is a great opportunity to get gametime into a lot of players. We put a very strong team out there against Stoke City last time. A lot of the players are looking forward to playing tomorrow"#BrentfordFC #BRECHE pic.twitter.com/iRcdcEREwV

Thomas Frank could be handed a double boost on the team news front ahead of the visit of Chelsea for the Carabao Cup quarter-final. On Wednesday, the Brentford manager might be bereft of the services of five first-team players.

The good news comes in the form of Ivan Toney and Ethan Pinnock’s availability, with the duo overcoming COVID-19 to be available to take on Chelsea. However, David Raya (knee), Zanka (hamstring), Julian Jeanvier (knee), Kristoffer Ajer (hamstring) and Joshua Dasilva (hip) remain on the sidelines.

In Raya’s continued absence, Alvaro Fernandez will continue to deputise between the sticks for Brentford. The Bees will line up in a 3-5-2 formation in front of Fernandez, with Charlie Goode, Pontus Jansson and Dominic Thompson forming the central defensive partnership against Chelsea.

Mads Roerslev and Tariqe Fosu-Henry should be the two wing-backs, allowing Frank to provide Sergi Canos and Rico Henry a breather. The wing-back duo will flank Mathias Jensen, Saman Ghoddos and Mads Bidstrup in the middle of the park. Finally, Toney should return to the starting eleven, where he will partner this season’s Carabao Cup top scorer Marcus Forss. 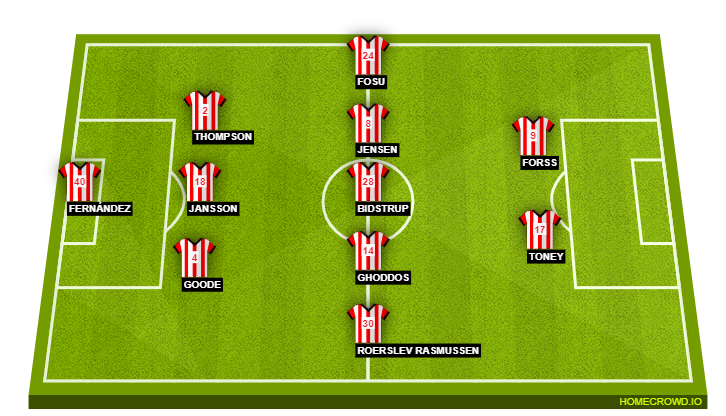 Unlike his counterpart in the Brentford dugout, Thomas Tuchel is constantly pegged back by negative updates on the team news front. The Chelsea boss will be without as many as ten first-team players due to injuries or illness on Wednesday.

The latest blow comes in the form of N’Golo Kante’s absence, although the Frenchman is not unfit. Instead, Tuchel is managing Kante’s minutes following his recent return from a long injury layoff. The same goes for Mateo Kovacic, with the Croat unlikely to start.

Time to hear from Thomas Tuchel ahead of tomorrow night's Carabao Cup tie with Brentford! 🎙 https://t.co/SiAb6mGS3k

The Italian international should immediately be back in the starting eleven, with Saul Niguez likely to start alongside him in the middle of the park. That is because Ruben Loftus-Cheek could miss out again. In addition, Andreas Christensen, Trevoh Chalobah and Hakim Ziyech are all unlikely to be fit enough to feature.

As ever, a Carabao Cup fixture will provide Tuchel with an opportunity to hand Kepa Arrizabalaga a start, with the Spaniard likely to be protected by Cesar Azpilicueta, Antonio Rudiger and Malang Sarr. Reece James and Marcos Alonso will continue as the two wing-backs in the absence of viable alternatives.

Finally, the Chelsea attack should be spearheaded by Christian Pulisic if Havertz remains unavailable. The USMNT international will be supplemented by Mason Mount and Ross Barkley, with Tuchel bereft of quality options in his attacking unit. 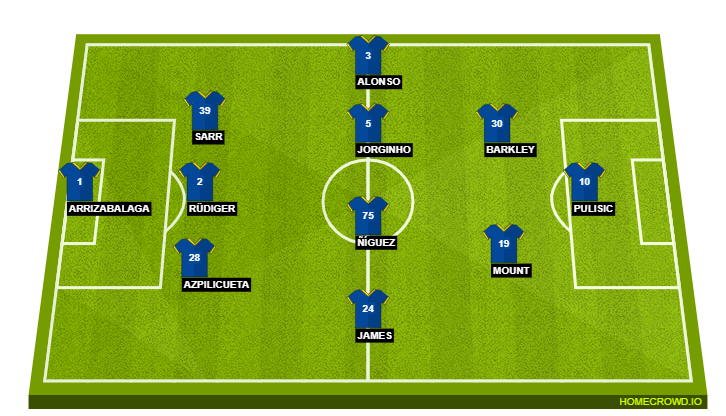 With Thomas Tuchel’s options running extremely thin, several fringe players will get a chance to impress the Chelsea boss, with one such player being a part of the creative unit. While Mason Mount will be the Blues’ creative supremo as he always is, Ross Barkley will have the chance to impress Tuchel.

The English international has seen starts coming at a premium this season, but Chelsea’s injury and coronavirus crisis comes as a major opportunity for him. And what better way to impress Tuchel than by possibly playing a part in Chelsea’s win over Brentford in the Carabao Cup quarter-finals? A big game beckons Barkley.

Thomas Tuchel might be struggling to name a competitive starting eleven, but his team might have enough quality to make a match out of the contest with Brentford. The Blues will again be left frustrated by the fact that their game is going forward, but Christian Pulisic’s pacy outlet could make a difference.

On the opposite end, Brentford will struggle to create many opportunities to engineer a goal, and Kepa Arrizabalaga should be equal to whatever is thrown his way. In the end, a solitary goal will likely be enough to clinch the tie, with Jorginho getting that strike from the penalty spot to book Chelsea’s place in the Carabao Cup semi-finals.