Manchester United will hope to keep their unbeaten run under Ralf Rangnick going when they take on Brentford on Tuesday.

The festive season is well and truly underway in England, with games coming thick and fast across the country. In the Premier League, Gameweek 17 of the 2021/22 season will get going on Tuesday, with Manchester United locking horns with Brentford at the Brentford Community Stadium on the night.

Brentford have been one of the surprise packages of the 2021/22 season, having taken the Premier League by storm in their maiden campaign in the competition. While they have not been quite Sheffield United-esque in their exploits, the Bees have still impressed thus far, as they sit 10th on the standings, a mere eight points adrift of fourth-placed West Ham United.

On the other hand, Manchester United are in recovery mode following the departure of Ole Gunnar Solskjaer last month. The Red Devils are yet to lose following their shock 4-1 defeat to Watford, having drawn two and won four of their six games in this period. Their most recent match ended in a 1-0 win over Norwich City at the end of a hard-fought battle.

Tuesday’s match-up will be the first-ever Premier League clash between Brentford and Manchester United, and ahead of the maiden meeting featuring the two sides, The Hard Tackle takes a closer look at the encounter.

"We are planning to play the #MUFC game. That’s what we are focusing on; we can’t control anything else. If the PL could make it very clear what the rules are for cancelling a game that would be very good"#BrentfordFC #BREMUN pic.twitter.com/HuqLfKiX14

Thomas Frank has been handed a major boost on the team news front ahead of the visit of Manchester United. On Tuesday, the Brentford manager will be able to recall two key first-team players, leaving six others on the sidelines.

Ivan Toney is back at Frank’s disposal after testing negative for COVID-19. In addition, Sergi Canos is also in line to return to the starting eleven after serving his suspension this past weekend versus Watford. The duo’s return leaves David Raya (knee), Kristoffer Ajer (hamstring), Julian Jeanvier (knee), Zanka (hamstring), Ethan Pinnock (COVID-19) and Joshua Dasilva (hip).

Frank is especially hamstrung in defence due to the absence of Ajer, Zanka and Pinnock. As a result, Vitaly Janelt will play in the back three alongside Charlie Goode and Pontus Jansson, who has recently been linked with several Premier League clubs. Alvaro Fernandez will continue to deputise for Raya in the Brentford goal.

Up ahead in midfield, Christian Norgaard, Shandon Baptiste and Mathias Jensen will form a compact unit, with Frank handing them the responsibility of keeping things tight in the middle of the park.

Sergi Cano and Rico Henry will be the two wing-backs who will be in charge of providing width higher up the pitch. Their deliveries from the flanks will hold the key in the offensive phases for Brentford, supplying Toney and Bryan Mbuemo. Toney will also look to bring his teammates into the game by dropping deep to throw the Manchester United midfielders off their game. 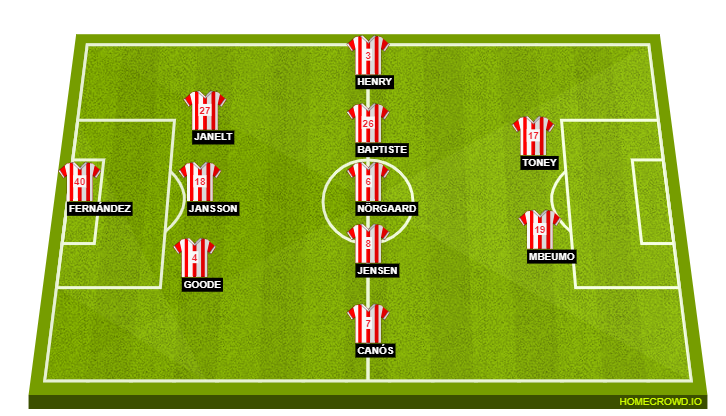 Like his counterpart in the Brentford dugout, Ralf Rangnick has some problems to cater to ahead of the trip to the Brentford Community Stadium. In particular, the Manchester United camp has been rocked by a COVID-19 outbreak at Carrington, which has disrupted training this week.

The identity of players who have tested positive for coronavirus is still unclear. So, we will name our probable eleven without any conjecture. With that in mind, Paul Pogba (hamstring) and Anthony Martial (knee) remain the only players who are definitely out. As for Raphael Varane, the Brentford game has come too soon for him on his recovery trail.

"That game at Brentford tomorrow is in serious doubt." #MUFC have 'closed down first-team operations' at the training ground today following positive Covid-19 tests among the first team staff and players. pic.twitter.com/KPpiDfPba0

That leaves Rangnick sweating over the fitness of Victor Lindelof, Aaron Wan-Bissaka, Nemanja Matic, Juan Mata and Edinson Cavani. None of the players is expected to start, although some might be on the bench and feature in the second half.

So, with Lindelof unlikely to be a part of the starting eleven, Eric Bailly could come into the side to partner Harry Maguire at the heart of the Manchester United defence, with Diogo Dalot and Alex Telles continuing as the two full-backs. Behind the four defenders, David de Gea remains a certainty between the sticks, especially on the back of his stellar display against Norwich City.

Up ahead in midfield, there is no displacing Scott McTominay and Fred, who were two of the best performers for Manchester United this past weekend. However, Rangnick will be concerned by the form of his attacking players, especially Marcus Rashford, who has struggled to perform consistently since returning to action two months ago.

Rashford could drop down to the bench against Brentford, with Mason Greenwood replacing him in the strike partnership, which will feature Manchester United talisman, Cristiano Ronaldo. Bruno Fernandes and Jadon Sancho, who also need to pull their socks up after sub-par performances at Carrow Road, will supplement the two strikers. 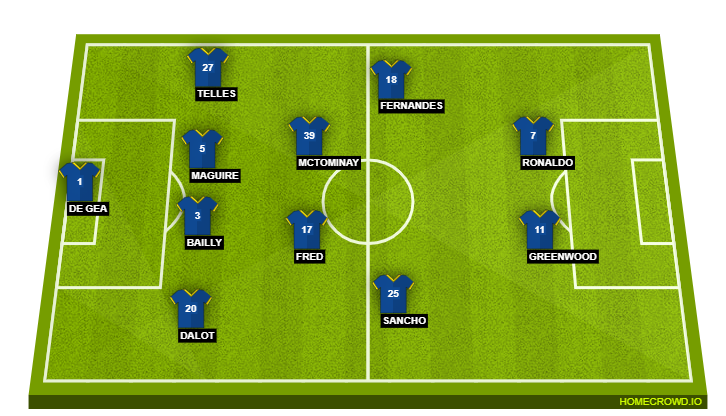 Eric Bailly has had a frustrating 2021/22 campaign thus far, as he has been relegated to the bottom end of the pecking order of centre-backs at Manchester United. However, Victor Lindelof’s health scare against Norwich City has given him a short window of opportunity to impress Ralf Rangnick.

The Ivorian made a critical impact off the bench at Carrow Road, with a late block denying Norwich a great chance to score. If selected to start, Bailly will have to play his heart out to show Rangnick he means business and is a viable option to feature regularly at the heart of the Manchester United defence. A big game beckons Bailly.

Manchester United have not had the most ideal of preparations in the build-up to the game against Brentford, and there are claims that the game is in serious doubt. Such a situation gives the Londoners a great chance to pounce and earn a shock win over one of the big hitters of the Premier League.

The Bees have already caused a stir with their performances against bigwigs like Liverpool, Chelsea, Arsenal and West Ham United. On Tuesday, Manchester United’s disrupted training could mean they might hold the Red Devils to a draw, with both sides getting on the score sheet. Therefore, The Hard Tackle predicts a 1-1 stalemate between Manchester United and Brentford.