Leicester City will hope to book safe passage through to the UEFA Europa League knockout phase when they take on Napoli on Thursday.

The curtains will fall on the group stage of the UEFA Europa League on Thursday, with Matchday 6 of the opening phase. One of the tightest groups in all of Europe is Group C of the competition, with just two points separating all four sides. And Leicester City will be aiming to keep a stronghold on the top spot when they lock horns with Napoli at the Diego Armando Maradona Stadium.

Napoli have been unable to reproduce their heroics from Serie A in the Europa League, having lost two of their five games thus far. Their predicament worsened last time as the Partenopei were beaten 2-1 by Spartak Moscow. In this period, their domestic form has also taken a hit, with Luciano Spalletti’s men dropping down to third on the table in Europe and Serie A.

On the other hand, Leicester have been nearly as inconsistent as Napoli, having won two of their five games in the Europa League. The only difference is the Foxes have recovered from a slow start to their European campaign and are unbeaten in their last three outings. However, their domestic form is a subject of concern, with Brendan Rodgers & co. failing to win their previous two matches.

The reverse fixture, played at the King Power Stadium in September, saw Napoli come back from two goals down to hold Leicester City to a 2-2 draw. Ahead of the latest meeting between the two sides, The Hard Tackle takes a closer look at the encounter.

🎙#Spalletti “Every game is like a final for us"#NapoliLeicester #UEL

Luciano Spalletti has a new roster issue hampering his preparations ahead of the visit of Leicester City. On Thursday, the Napoli manager will be bereft of the services of six first-team players due to injuries or illness.

Stanislav Lobotka is the latest absentee due to a hamstring injury sustained against Atalanta this past weekend. The Slovak has joined Kalidou Koulibaly (hamstring), Alessandro Zanoli (COVID-19), Fabian Ruiz (groin), Lorenzo Insigne (calf) and Victor Osimhen (face) on the sidelines and will play no part against Leicester City.

Spalletti should keep faith in the 3-4-3 formation he has utilised recently despite the downturn in fortunes, with David Ospina likely to take his place in goal. In front of the Colombian goalkeeper, Giovanni Di Lorenzo, Amir Rrahmani and Juan Jesus will form the central defensive partnership.

Up ahead in midfield, Diego Demme and Piotr Zielinski are likely to be the two players slotting in centrally, with the duo tasked with keeping things tight in the middle of the park and keeping a lid on James Maddison’s output. The two midfielders will be flanked by Kevin Malcuit and Mario Rui, who will provide the width higher up the pitch.

In Insigne’s absence, the onus of providing a direct threat will fall on Hirving Lozano, who will be one of the two wide men. Dries Mertens will continue to spearhead the Napoli attack in the absence of Osimhen, with Matteo Politano completing the frontline against Leicester City. 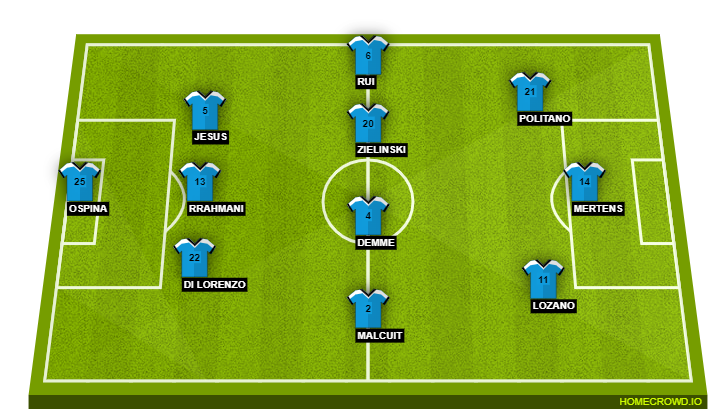 Like his counterpart in the Napoli dugout, Brendan Rodgers has some pressing concerns to deal with ahead of the trip to the Diego Armando Maradona Stadium. In particular, the Leicester City camp has been struck by a COVID-19 outbreak, with seven players missing Thursday’s game due to the coronavirus or other illness.

While Rodgers did not confirm the identity of those players during his pre-match press conference, Leicester Mercury’s Jordan Blackwell revealed the names. Ademola Lookman, Daniel Amartey, Kelechi Iheanacho, Ayoze Perez, Filip Benkovic, Vontae Daley-Campbell and Jannik Vestergaard are the players mentioned above.

In addition, Ricardo Pereira (hamstring), Wesley Fofana (leg) and James Justin (knee) remain on the sidelines due to their respective injuries. However, there is some good news, with Youri Tielemans and Ryan Bertrand being part of the travelling squad after recovering from their fitness issues.

Brendan Rodgers has confirmed in his press conference that SEVEN first team players have not made the trip to face Napoli due to COVID-19 or illness. pic.twitter.com/cp1LUSAmFg

After being left short-changed on viable options, Rodgers’ team selection could be straightforward bar a few key decisions. Tielemans will likely be eased back into the thick of the action and will probably be an option on the bench.

So, the double-pivot in midfield will be formed by Wilfred Ndidi and Boubakary Soumare. The third midfielder in the side will be James Maddison, who has been the in-form player for Leicester City in recent weeks.

Meanwhile, the absence of Perez and Lookman means Patson Daka could be deployed on the right flank, with Harvey Barnes assuming the left-wing slot. However, Daka will move infield during the attacking phases, where he will complement Jamie Vardy, who will spearhead the Leicester attack.

At the back, Jonny Evans and Caglar Soyuncu will pair up in central defence, with Timothy Castagne and Luke Thomas picking themselves as the two full-backs. Finally, in goal, there is no looking past Kasper Schmeichel. 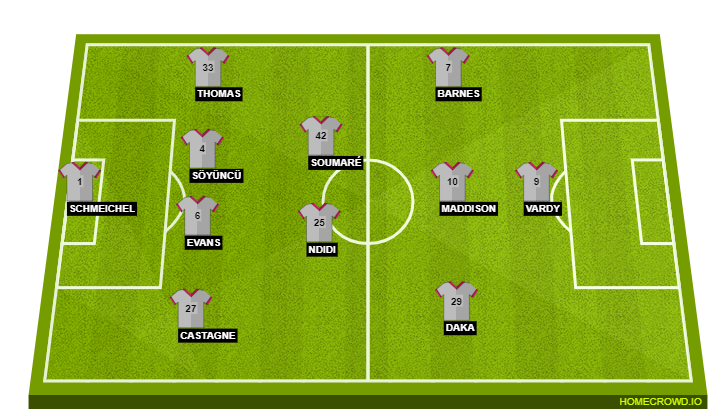 Amid the concerns over Leicester City’s form and Brendan Rodgers’ future, one player who has gone from strength to strength recently is James Maddison. The Englishman has been in delightful touch in the last few weeks and has seemed to be the major hope for the Foxes to get out of their mini rut.

With Leicester’s concerns amplifying heading into the UEFA Europa League tie with Napoli, the onus will be on Maddison to create chances galore while also providing a major goal threat. How he fares will ultimately determine if the Foxes can overcome Napoli on Thursday.

A coronavirus outbreak might have hit Leicester City, but the starting eleven likely to be named by Brendan Rodgers is still strong enough to get the job done. However, their vulnerabilities at the back will constantly keep Napoli in the game, with Dries Mertens and Hirving Lozano being the major threats.

James Maddison should make a major impact on his forward forays at the opposite end, ably complemented by Patson Daka and Jamie Vardy, who should be in top form and earn Leicester City all three points at the end of a goal-fest. The Hard Tackle predicts a 3-2 win for Rodgers’ charges, with the result cementing their status as Group C winners.