Gameweek 15 of the Premier League will begin with a blockbuster London Derby as West Ham United and Chelsea face off at the London Stadium on Saturday.

The games continue to come thick and fast across Europe, with Gameweek 15 of the 2021/22 Premier League season kicking off less than two days after the end of the previous round of fixtures. The action begins at the London Stadium, where West Ham United will play hosts to Chelsea in a fiery derby in Saturday’s lunch-time kick-off.

West Ham United have continued right from where they left off last season, having once again established themselves as firm contenders for European qualification. The Hammers are currently fourth in the Premier League standings, although a run of three games without a win has enabled the chasing pack in Arsenal, Tottenham Hotspur and Manchester United to catch up to them.

On the other hand, Chelsea have been thoroughly professional in the 2021/22 campaign, having been beaten just twice across formats thus far. However, there have been minor hiccups in the Premier League lately, with the Blues playing 1-1 draws with Burnley and Manchester United, which has meant that Manchester City and Liverpool are just a point and two points adrift, respectively.

The corresponding fixture last season was a tentative affair, which ended in a 1-0 win for Chelsea, with Timo Werner scoring the only goal of the game. Ahead of the latest meeting between the two sides, The Hard Tackle takes a closer look at the encounter.

"Aaron Cresswell has done a bit of light training, so we'll have a look at that."#WHUCHE

David Moyes does not have any fresh injury concern hampering his preparations ahead of the visit of Chelsea. On Saturday, the West Ham United manager will have to make do without at least one first-team player, with Angelo Ogbonna a long-term absentee due to a knee injury.

The more pressing concern in the immediate future is the fitness of Aaron Cresswell, who sustained a back injury after sustaining a back injury recently. However, there are suggestions that Cresswell will be fit enough to start, meaning he should return as the left-back against Chelsea.

On the opposite flank, Ben Johnson has well and truly usurped Vladimir Coufal as the first-choice right-back lately and should get the nod from Moyes on Saturday. At the heart of the West Ham defence, there is no looking past Kurt Zouma and Craig Dawson, with Lukasz Fabianski set to take his place in goal.

Up ahead in midfield, Declan Rice and Tomas Soucek will form a solid double pivot, with the duo being tasked with keeping a lid on Mason Mount’s output. At the same time, Rice and Soucek will have the responsibility of overseeing swift and efficient transitions to the final third.

As for the attacking unit, Michail Antonio will lead the line for West Ham against Chelsea, with Jarrod Bowen, Said Benrahma and Pablo Fornals providing the supply line for him while also posing a goal threat themselves. The likes of Nikola Vlasic, Manuel Lanzini and Andriy Yarmolenko will be backup options on the bench. 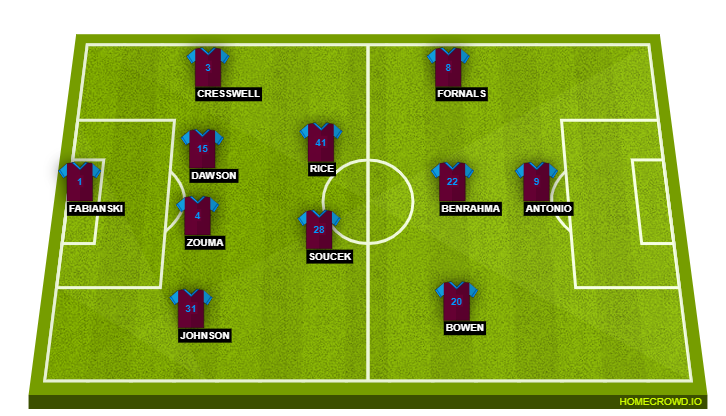 Unlike his counterpart in the West Ham United dugout, Thomas Tuchel has one new fitness issue to deal with ahead of the short trip to the London Stadium. On Saturday, the Chelsea boss will be bereft of the services of four first-team players.

The latest Chelsea player to be sidelined is Trevoh Chalobah, who sustained a hamstring injury that will keep him out of action for the foreseeable future. The young defender has joined N’Golo Kante (knee), Mateo Kovacic (hamstring) and Ben Chilwell (knee) in the list of absentees.

Let's hear from the boss ahead of #WhuChe tomorrow! 👊 https://t.co/edisrVhPEW

However, there is some positive news, as Reece James is fit to return after recovering from a minor knock that forced him to miss the game against Watford earlier this week. The Englishman will take his place in the right wing-back slot, with Cesar Azpilicueta making way. On the opposite flank, there is no looking past Marcos Alonso in the absence of Ben Chilwell.

At the back, the injured Chalobah will be replaced by Thiago Silva, who will sit at the base of the central defensive setup, ably supported by Antonio Rudiger and Andreas Christensen. Behind the three centre-backs, Edouard Mendy is a certainty between the sticks.

Up ahead in midfield, Jorginho should be fit enough to return to the starting lineup, replacing the ineffective Saul Niguez in the middle of the park, where he will sit alongside Ruben Loftus-Cheek. As for the attacking unit, Mason Mount and Kai Havertz should have impressed enough to nail down their spots ahead of Timo Werner, Callum Hudson-Odoi, Christian Pulisic and Hakim Ziyech with Romelu Lukaku leading the line. 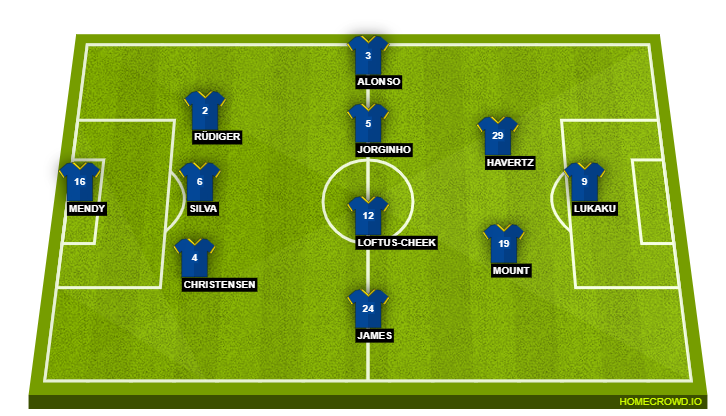 Thomas Tuchel has an abundance of attacking talent at his disposal, and in such a scenario, the onus is always on those who get the chance to make their mark to deliver the goods when called upon or risk falling down the pecking order. Against Chelsea, that risk will be faced by Kai Havertz, especially with Callum Hudson-Odoi, Hakim Ziyech, Christian Pulisic and Timo Werner waiting for their chance.

Havertz has fared reasonably well since he was first handed a regular role in the absence of Romelu Lukaku. While the German did not always dazzle, he has started showing his best qualities and was in fine form against Watford last time out. If he can continue his run against West Ham, Havertz will have gone a long way in his Chelsea. A critical period for the youngster.

West Ham United have not been too prolific at home this season. On top of that, their fine run of form has suddenly disappeared, with the Hammers failing to win their last three Premier League games. On the other hand, Chelsea are finding ways to win games even when they are not at their best.

That should also be the case on Saturday, with the Blues likely to hold off a spirited West Ham United side while also scoring the only goal of the game to seal all three points. Romelu Lukaku could be back in business with that, and The Hard Tackle predicts a 1-0 win for Thomas Tuchel & co.