Manchester City will be hoping to continue their superb winning run when they take on Watford at Vicarage Road on Saturday.

The action in club football is coming at a breakneck pace across Europe. Gameweek 15 of the 2021/22 season in the Premier League will begin on Saturday, with a London derby between West Ham United and Chelsea. The action on the day will draw to a close in Hertfordshire, as Watford play hosts to Manchester City at Vicarage Road.

Watford have been quite impressive in recent weeks, even if the results have not gone their way. The Hornets have shown a lot of resilience, pointing towards Claudio Ranieri positively affecting the dressing room since his appointment as Xisco Munoz’s replacement two months ago. Such fighting spirit was on full display earlier this week against Chelsea, who could only narrowly beat Watford 2-1 on Wednesday.

On the other hand, Manchester City have been rediscovering their relentless selves in recent weeks, although the absence of a natural striker can still be telling at times. Nonetheless, the Citizens have embarked on a six-game winning run recently. This streak includes victories against Manchester United and PSG, with their most recent fixture ending in a 2-1 win over Aston Villa this week.

The corresponding fixture last season saw Manchester City cruise to a 4-0 win over Watford, with Raheem Sterling, Phil Foden and Aymeric Laporte on target. Ahead of the latest meeting between the two sides, The Hard Tackle takes a closer look at the encounter.

Claudio Ranieri has one fresh injury concern hampering his preparations ahead of the visit of Manchester City. On Saturday, the Watford manager will be bereft of the services of as many as eight first-team players.

The latest player to be sidelined is Adam Masina, who sustained a thigh injury against Chelsea this week. Apart from the 27-year-old Ken Sema (knee), Francisco Sierralta (hamstring), Ben Foster (groin), Peter Etebo (quadriceps), Nicolas N’Koulou (hamstring), Kwadwo Baah (ankle) and Ismaila Sarr (knee) are all on the sidelines.

In the continued absence of Sarr, the onus will remain firmly on Emmanuel Dennis to make a difference in the final third. Along with Joshua King and Joao Pedro, Dennis will form a fluid strike trio. The three attackers will often look to interchange positions smartly and provide a direct threat to the Manchester City goal.

At the back, William Troost-Ekong and Craig Cathcart will pair up at the heart of the Watford defence, with Jeremy Ngakia and Danny Rose being the two full-backs. Finally, in goal, Daniel Bachmann will continue to deputise for Foster. 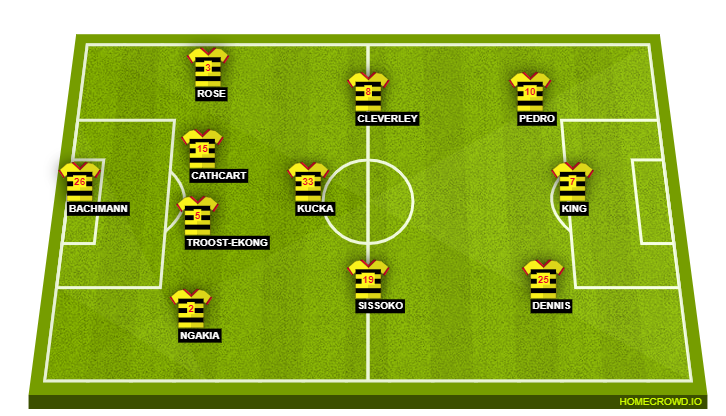 Unlike his counterpart in the Watford dugout, Pep Guardiola barely has any fitness issues to deal with ahead of the trip to Vicarage Road. On Saturday, the Manchester City manager will have to make do without one first-team player, with Ferran Torres still recovering from a foot injury.

In the absence of Torres, several players have been tried as either a striker or a false nine. On Saturday, Phil Foden should return to lead the line for Manchester City after recovering from a knock this week. Foden will be supplemented by Riyad Mahrez and Raheem Sterling, who have been in the ascendancy lately.

Jack Grealish will be handed a rare start in midfield after losing his spot in the side. The former Aston Villa captain will be stationed in the middle of the park alongside Ilkay Gundogan, with the duo expected to embark on several forays forward.

Kyle Walker is another player likely to return in the right-back slot, while on the left flank, Joao Cancelo is a certainty. Ruben Dias and Aymeric Laporte will likely get the nod over John Stones at the heart of the Manchester City defence. Finally, in goal, Ederson Moraes is an automatic pick. 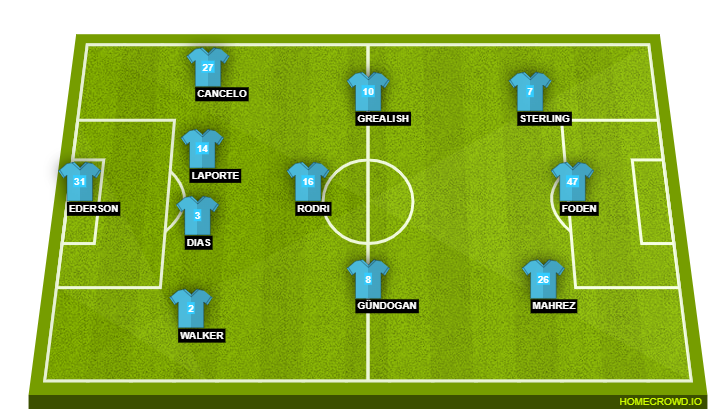 Sterling has done well to hit the ground running belatedly and force his way into contention for regular starts. Not too long ago, the English international was struggling to make a difference for Manchester City, with Pep Guardiola preferring other players over him.

As a result, it has even been suggested that Sterling could leave Manchester City, with Barcelona among his suitors. However, that appears to be a thing of the past, with Sterling looking ahead with optimism. And against Watford, the 26-year-old will back himself to deliver the goods, having scored ten goals and assisted two in just eight meetings in all competitions.

Watford have shown a lot of fighting spirit even though Claudio Ranieri has been dealt with a difficult run of fixtures to turn his team’s fortunes around. While the Hornets have lost five of the seven games Ranieri has overseen, the importance of resilience seems to have been imbibed in them lately.

However, Manchester City have undeniable quality in their squad, with the players on the bench likely to make their mark. In addition, Raheem Sterling should be involved heavily, while at the other end, Emmanuel Dennis and Joshua King will combine for a goal. Ultimately, though, Manchester City should do enough to grab all three points, courtesy of a 3-1 win on Saturday.