Tottenham Hotspur will be aiming to return to winning ways when they play hosts to London rivals Brentford in the Premier League on Thursday.

The curtains will fall on Gameweek 14 of the 2021/22 Premier League season, with only two games left to be played for the latest round of fixtures to culminate. Tottenham Hotspur will play hosts to Brentford in the first match of the day at the Tottenham Hotspur Stadium, hoping to return to winning ways.

Tottenham have endured a largely forgettable 2021/22 campaign thus far. Although Spurs started the new season strongly, their form has been on the wane after the first month of the season, forcing the club to sack Nuno Espirito Santo. His replacement Antonio Conte has been slow off the blocks, recently even suffering a shock 2-0 defeat to NS Mura last week, putting a dent in their UEFA Europa Conference League ambitions.

On the other hand, Brentford have been one of the surprise packages of the season, having shown little signs of being overawed by the jump from the Championship to the Premier League. The Bees have already enjoyed memorable outings against Arsenal, Chelsea and West Ham United, most recently beating Everton 1-0 at home this past weekend.

Thursday’s clash will be the first occasion when Tottenham and Brentford take on each other in the Premier League. Ahead of their maiden meeting in the competition, The Hard Tackle takes a closer look at the encounter.

🎙 "We know that Brentford is a good team and we have to be well organised."

Antonio Conte does not have any fresh injury concerns hampering his preparations ahead of the visit of Brentford. On Thursday, the Tottenham Hotspur manager will be bereft of the services of as many as three first-team players.

Cristian Romero is the latest player on whom there has been a major update, with the Argentine set to miss at least four weeks of action and only likely to return in January at the earliest. In addition, Dane Scarlett is unavailable for the foreseeable future due to an ankle injury, while Giovani Lo Celso is also sidelined, although he is closing in on his return.

Against Brentford, Tottenham will line up in the 3-4-3 formation that Conte has largely utilised since being appointed as the new manager. In goal, there is no looking past Hugo Lloris, with Eric Dier, Davinson Sanchez and Ben Davies forming the central defensive partnership.

Up ahead in midfield, the onus will be on Oliver Skipp and Pierre-Emile Hojbjerg to track the movement of Ivan Toney, who tends to drop deep to orchestrate play for Brentford. The duo will also look to set a quick tempo to bring the attacking players into the reckoning.

Out wide, Emerson Royal and Sergio Reguilon will be the two marauding wing-backs, and they will need to be clinical with their output. Finally, the attacking unit will feature Harry Kane, Lucas Moura and Son Heung-min, with Kane and Son in desperate need to deliver the goods for Tottenham. 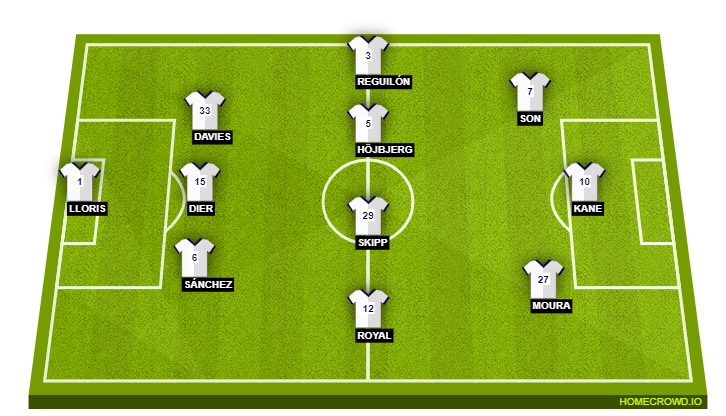 Like his counterpart in the Tottenham dugout, Thomas Frank barely has any new fitness issue to deal with ahead of the short trip to the Tottenham Hotspur Stadium. On Thursday, the Brentford manager will have to make do without five first-team players.

Frank had been sweating over the fitness of Christian Norgaard, Rico Henry and Sergi Canos after they were taken off with injuries last time out against Everton. However, each of the three players is fit and available, leaving Mathias Jorgensen, Josh Dasilva, Tariqe Fosu, David Raya and Kristoffer Ajer as the remaining absentees.

💬
Zanka will be assessed weekly, he will not be available for Tottenham

Kris Ajer is doing well; he will most likely be about three to four weeks

Tariqe Fosu was very unlucky with a hamstring injury in training which needed surgery. That will take a while#BrentfordFC #TOTBRE pic.twitter.com/RkxSUuVzex

The continued absence of Ajer and Zanka is forcing Frank to field a backup option in the back three, with Charlie Goode expected to start alongside Pontus Jansson and Ethan Pinnock. Behind them, Alvaro Fernandez will continue deputising for Raya between the sticks for Brentford.

Up ahead in midfield, the indomitable Norgaard will sit at the base of the three-man unit, looking to orchestrate play from the middle of the park while receiving defensive support from Frank Onyeka and Vitaly Janelt.

Sergi Canos and Rico Henry will be the two wing-backs, with the duo’s deliveries from the flanks holding the key for Brentford in open play. Ivan Toney and Bryan Mbuemo will continue to form the strike partnership, with Toney often looking to open up space for Mbuemo to exploit higher up. However, the 22-year-old needs to be more clinical, having hit the woodwork countless times this season. 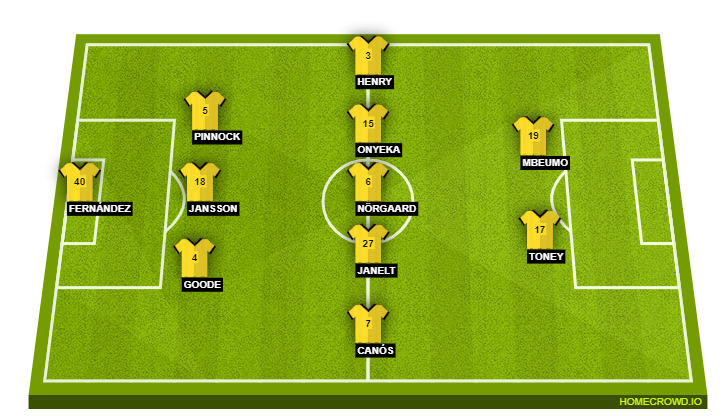 The game on Thursday will be a tale of two types of attacking units. One is laden with stars but is underperforming to the hilt this season, with only one player pulling the weight to a great extent; the other keeps on delivering the goods despite not largely unrecognized in the Premier League. As far as the former is concerned, Harry Kane is in desperate need of a turnaround.

The 28-year-old has been in the form of his life playing for England, often scoring goals for fun. However, Kane is struggling to get going for Tottenham this season, failing to get into the right areas or provide the finishing touches when he does reach the final ball. Against Brentford, Kane will need to step up to guide Tottenham back to winning ways. If not, it could be yet another difficult evening for Spurs. A big game beckons.

Tottenham have had the benefit of essentially having the week off after their game with Burnley on the weekend got postponed due to inclement weather conditions. With his players well-rested, Antonio Conte will hope for the right kind of response following the defeat to NS Mura exactly one week ago.

However, Brentford have shown that they can take the game to the best teams in the Premier League, and Tottenham will be no different. The Bees also have a solid away record, and this could be another outing on the road that ends in an unbeaten result. In the end, there is unlikely to be anything to separate the two sides, and The Hard Tackle predicts a 1-1 draw as a result.