Liverpool will hope to keep pace with Chelsea and Manchester City atop the Premier League when they take on Everton at Goodison Park on Wednesday.

Gameweek 14 of the 2021/22 Premier League season gets underway on Tuesday, just two days after the previous round of fixtures culminated. On Wednesday, six games are scheduled, with the marquee fixture being the Merseyside derby. Everton and Liverpool will go head-to-head at Goodison Park, with both teams in contrasting runs heading into the big game this week.

Everton’s form has withered away following a strong start to life under Rafael Benitez. The Toffees had held Manchester United to a morale-boosting 1-1 draw at the beginning of October. However, in the two months since, they have failed to win their six subsequent fixtures, losing five of them, including a 1-0 defeat at the hands of Brentford this past weekend.

On the other hand, Liverpool are flying high at the onset of the 2021/22 season, having lost just one game in all competitions thus far. Oddly enough, though, the Reds have dropped points in five of their 13 Premier League games this term, which has left them two points adrift of Chelsea. However, a 4-0 rout of Southampton last week is sure to have bolstered the visitors ahead of the derby.

The corresponding fixture last season ended in a 2-2 draw between Everton and Liverpool in what was the start of the then-defending champions’ downward spiral in a forgettable campaign. Ahead of the latest meeting between the two sides, The Hard Tackle takes a closer look at the encounter.

🗣 | A team news update from the boss ahead of the Merseyside derby. #EVELIV

Rafael Benitez has been handed a major boost on the team news front ahead of the visit of Liverpool. On Wednesday, the Everton manager will only be bereft of the services of five first-team players due to injuries or suspension.

The good news comes in the form of Richarlison’s return, with the Brazilian back at Benitez’s disposal after serving a one-match ban against Brentford on the weekend. However, Mason Holgate remains on the sidelines, with the Liverpool game being the third of his three-match suspension.

In addition, Yerry Mina (hamstring), Tom Davies (knee) and Dominic Calvert-Lewin (thigh) are still unavailable due to their respective injuries. However, in his pre-match press conference, Benitez has confirmed that Andre Gomes has resumed training after recovering from his injury, although the game might have come too soon for him.

In Gomes’s continued absence, Abdoulaye Doucuore and Allan pick themselves in the double pivot. The duo will aim to improve following a sub-par showing against Brentford. Andros Townsend was abysmal in the same game and will hope to step up better in his maiden Merseyside derby.

However, Alex Iwobi and Salomon Rondon will not get a chance to make amends, with Richarlison and Demarai Gray set to return to the Everton attacking unit against Liverpool. The former Liverpool boss will hand last spot in the final third to Anthony Gordon, who continues to show promising signs for the Toffees.

There is unlikely to be any change at the back, with Ben Godfrey and Michael Keane forming the central defensive partnership, while Lucas Digne and Seamus Coleman will be the two full-backs. Finally, in goal, Jordan Pickford, the pantomime villain for Liverpool fans after the corresponding fixture last season, is an automatic pick for Benitez. 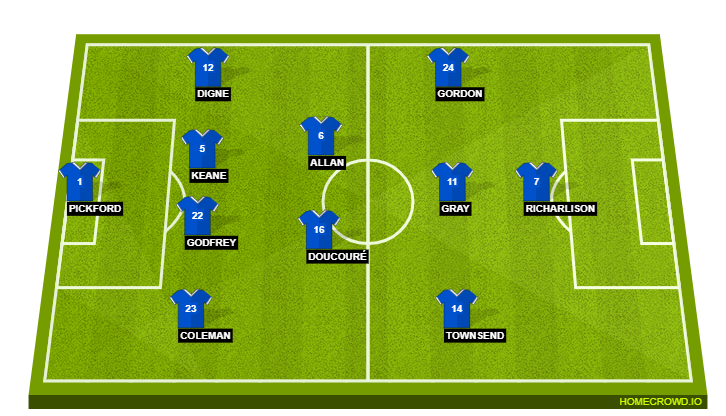 Unlike his counterpart in the Everton dugout, Jurgen Klopp will not be greeting the return of a star ahead of the Merseyside derby. However, the Liverpool boss does not have a fresh injury concern hampering his preparations ahead of the short trip to Goodison Park, with five first-team players still on the sidelines.

Naby Keita (hamstring), Joe Gomez (muscle injury) and Roberto Firmino (hamstring) are inching closer to their respective returns and will be up for selection within the next two weeks. However, the same cannot be said of Curtis Jones (eye) and Harvey Elliott (ankle), leaving Klopp short-changed in the middle of the park.

However, James Milner’s return has been timely, and the Liverpool vice-captain should be back in the side, thereby affording a bit of a rest to Thiago Alcantara after some of his excursions in the past week. Milner will line up alongside Fabinho and Henderson in the midfield trifecta, with the trio providing a solid base in the middle of the park.

Up ahead in the attacking unit, Klopp is unlikely to make any major alterations despite the expectation to do so sooner or later. So, Diogo Jota will lead the line for Liverpool against Everton, with Mohamed Salah and Sadio Mane being the two wide men.

The defensive line could see one change, with Joel Matip replacing Ibrahima Konate at the heart of the Liverpool backline. Trent Alexander-Arnold and Andrew Robertson will continue as the two marauding full-backs, with Alisson Becker a certainty between the sticks. 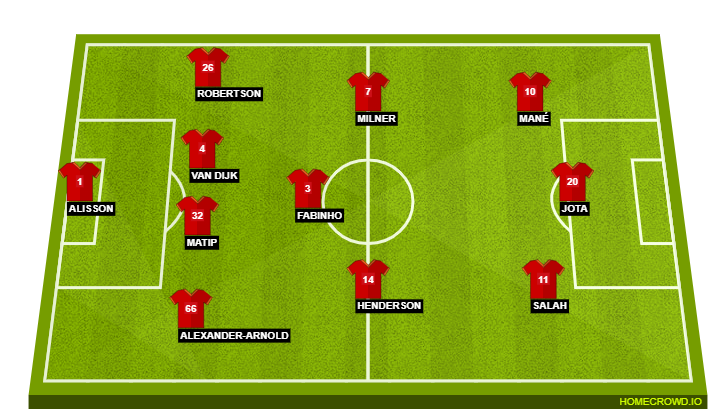 If there is one player who will have vivid memories of the corresponding fixture last season.  In that game, the Dutchman suffered an injury that kept him out of action for the remainder of the season. In turn, it also derailed the Reds’ campaign, with their Premier League title defence fizzling out quite quickly.

Now, though, van Dijk has the opportunity to influence a big result against local rival Everton and perhaps even score a goal past Jordan Pickford to boot. Most importantly, Liverpool’s defensive leader will be eager to ensure Alisson Becker keeps a clean sheet in what will be one of the most satisfactory outcomes of the season for him.

Wednesday’s match pits two teams up with completely runs of form up against each other. While Liverpool are winning games and scoring goals for fun, for the most part, Everton cannot get all three points in a game at all for one reason or another.

With Mohamed Salah, Sadio Mane and Diogo Jota flying at the moment, it looks like the Toffees’ winless run will extend to eight games this week. In the process, Everton will become the first club to lose 400 Premier League matches, which will also be a 10th home defeat of 2021, equalling their top-flight record at Goodison Park in a calendar year.

Meanwhile, Liverpool have kept a clean sheet in each of their past 10 Premier League victories, including all eight this campaign, and that record will also extend in the first Merseyside derby of the season. So, The Hard Tackle predicts a 3-0 win for Jurgen Klopp & co. in a result that will help them keep pace with Chelsea, who face Watford this week.