Paris Saint-Germain will be aiming to bounce back to winning ways when they take on Saint-Etienne at Stade Geoffroy-Guichard on Sunday.

The curtains will fall on Matchday 15 of the 2021/22 Ligue 1 season on Sunday, with as many as seven games on show on the day. The action starts at Stade Geoffroy-Guichard, where Saint-Etienne will play hosts to table-toppers Paris Saint-Germain.

Saint-Etienne have endured a difficult 2021/22 campaign thus far, having been embroiled in the relegation battle right from the get-go. The Saints are second from bottom in the Ligue 1 standings, a point behind 17th-placed ES Troyes AC.

As a result, Claude Puel faces an uncertain future at the club, although his men have shown an upturn in form in recent weeks, having not been beaten in any of their last four games. On the other hand, Paris Saint-Germain are the runaway leaders in Ligue 1 this season.

Perched atop the table with an eleven-point gap to second-placed OGC Nice, PSG might already have an unassailable lead in the title race unless they have a surprise collapse. However, Mauricio Pochettino might not be in the job for long, with Zinedine Zidane heavily linked with the top job, especially in the wake of the Manchester United rumours and the midweek defeat to Manchester City in the UEFA Champions League.

The corresponding fixture last season saw Saint-Etienne and PSG playing out a 1-1 draw, with Romain Hamouma scoring for the hosts while Moise Kean found the back of the net for PSG. Ahead of the latest meeting between the two sides, The Hard Tackle takes a closer look at the encounter.

Claude Puel has greeted a mixed bag of updates on the team news front ahead of the visit of Paris Saint-Germain. On Sunday, the Saint-Etienne manager will be bereft of the services of as many as five first-team players.

The good news comes in the form of Mahdi Camara’s return, with the right-back available again after serving a suspension. However, star forward Romain Hamouma misses out after sustaining a thigh injury in training. The 34-year-old has joined Gabriel Silva (hamstring), Saidou Sow (thigh), Harold Moukoudi (hamstring) and Yvan Neyou (ankle) on the sidelines.

Camara is likely to come into the starting lineup in place of Yvann Macon following the end of his suspension. The 23-year-old will take his place at right-back, with Miguel Trauco a certain starter on the opposite flank. At the heart of the Saint-Etienne defence, Timothee Kolodziejczak and Mickael Nade will pair up while Etienne Green, will be stationed in goal for the hosts.

Up ahead in midfield, Puel could recall Lucas Gourna-Douath to add a more physical presence in the middle of the park. Gourna-Douath will sit at the base of the midfield unit, receiving defensive support from Zaydou Youssouf and Ryad Boudebouz, who will also provide the forward thrust.

As for the attacking unit, Wahbi Khazri is in line to return to the starting lineup to lead the line for Saint-Etienne against PSG, filling the void left by the absence of Hamouma. Arnaud Nordin and Adil Aouchiche will be the two wide men for the hosts. 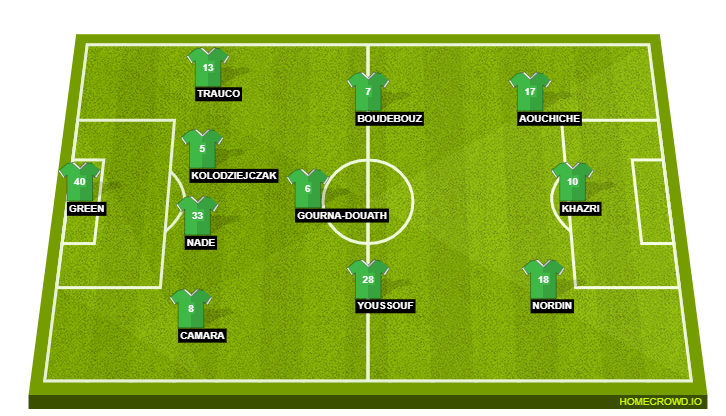 Unlike his counterpart in the Saint-Etienne dugout, it has been all bad news for Mauricio Pochettino ahead of the trip to Stade Geoffroy-Guichard. The Paris Saint-Germain boss will have to make do without eight first-team players due to injuries and suspension on Sunday.

Keylor Navas misses out due to a suspension after getting sent off last weekend against Nantes. So, Gianluigi Donnarumma picks himself between the sticks, with PSG likely to line up in a 4-2-3-1 formation in front of him.

🎙💬 Mauricio Pochettino visited our #PSGTV studio before the press conference to talk all things #ASSEPSG pic.twitter.com/NZM3Hb0uAr

So, Pochettino’s resources are stretched thin, especially in midfield, where Idrissa Gueye will have Danilo Pereira as his partner in the double-pivot. At the heart of the PSG defence, Marquinhos should be accompanied by Abdou Diallo, while Juan Bernat and Colin Dagba will be the two full-backs.

The PSG attacking unit has come under the scanner in recent weeks, especially amid Lionel Messi’s struggles to rediscover his best levels. Messi will have a free role in the final third, playing off Kylian Mbappe, who will lead the line against Saint-Etienne. Neymar and Angel Di Maria will be stationed out wide, but the attacking quartet will form a fluid partnership, hoping to be clinical on Sunday. 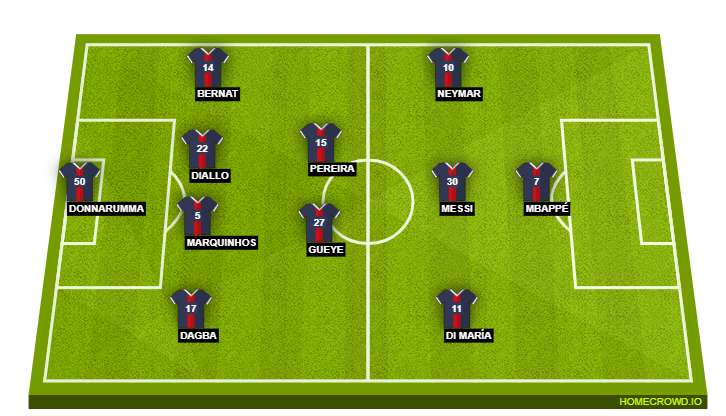 When Lionel Messi completed his shock move from Barcelona to Paris Saint-Germain in the summer transfer window, he would have filled the PSG fans with a sense of optimism. After all, their team had just signed the best player in the world. However, it is fair to say that Messi is yet to get going at the club.

The 34-year-old has especially struggled in Ligue 1, scoring only once in six outings thus far, although injuries have also played a part in his woes. Nevertheless, Jamie Carragher recently claimed that Cristiano Ronaldo has fared better following his big move to Manchester United than Messi, who will look to set the record straight and become a pivotal figure for PSG.

With Saint-Etienne being one of the worst sides in Ligue 1, one will expect Messi to get some ounce of his form back, which will be enough to inspire PSG to yet another top-flight win taking them a step closer to reclaiming the title.

For once, Mauricio Pochettino does not have a problem of plenty at his disposal. However, with key midfielders unavailable, the PSG boss will look upon his star attackers to deliver the goods, which has not been as straightforward as he would like this season.

The visitors should again struggle to be in full flow, with Kylian Mbappe likely to be the man making a world of difference. For their part, Saint-Etienne will put PSG under pressure, even scoring a goal to take the game right down the wire. However, Pochettino’s men should do enough to grab all three points, clinching a 2-1 win in the process.