Brentford and Everton will be desperate to return to winning ways when they face off at the Brentford Community Stadium on Sunday.

Gameweek 13 of the 2021/22 Premier League season will culminate on Sunday, with as many as five matches on show. Brentford will play hosts to Everton in one of the first games on the day at the Brentford Community Stadium, with both teams in desperate need of a win.

Brentford have gone off the boil following a fantastic start to the season, which saw them climb up to the European places at one point. However, since the big win over West Ham United last month, the Bees have been on a freefall, failing to win each of their last five Premier League games. Such a run of results has dropped Thomas Frank & co. down to 14th on the table, just four clear of Burnley in the 18th spot.

On the other hand, Everton are only slightly well off compared to Brentford, having claimed two more points thus far to sit 11th in the Premier League standings. However, like their hosts, the Toffees have been poor of late, failing to win their last six top-flight fixtures to drop down the table consistently.

Brentford prevailed on penalties following a 1-1 draw with Everton in a third-round League Cup tie back in 2010, which was the last time the clubs clashed against each other. Ahead of the latest meeting between the two sides, The Hard Tackle takes a closer look at the encounter.

"From the last squad everyone is fit

Mathias Jensen will also be available for selection

Most likely Zanka will miss the game

Thomas Frank has been handed a minor boost on the team news front ahead of the visit of Everton. On Sunday, the Brentford manager will be able to call upon two players but will still be bereft of the services of five first-team players.

The major absentee for the hosts remains David Raya, who continues to recover from a long-term knee injury. In addition, Kristoffer Ajer (hamstring), Zanka (match fitness), Joshua Dasilva (hip) and Julian Jeanvier (knee) are also unavailable and will play no part against Everton.

In Raya’s absence, Alvaro Fernandez will continue to deputise in goal and will hope to fare better following disappointing performances in recent weeks. Mads Roerslev will get a chance to impress because of Ajer and Zanka’s unavailability, with the Dane set to start alongside Pontus Jansson and Ethan Pinnock in the back three.

Up ahead in midfield, Vitaly Janelt and Christian Norgaard will start alongside Jensen in an energetic trifecta. The second line of press will be completed by the two ever-present wing-backs, Sergi Canos and Rico Henry.

Finally, the last two pieces of the puzzle will be the strike partnership of Bryan Mbuemo and Ivan Toney. Only this time around, Toney will look to have a greater presence in the Everton box instead of dropping down to aid the build-up play. On the other hand, Mbuemo will hope for better fortune after smashing the woodwork game after game. 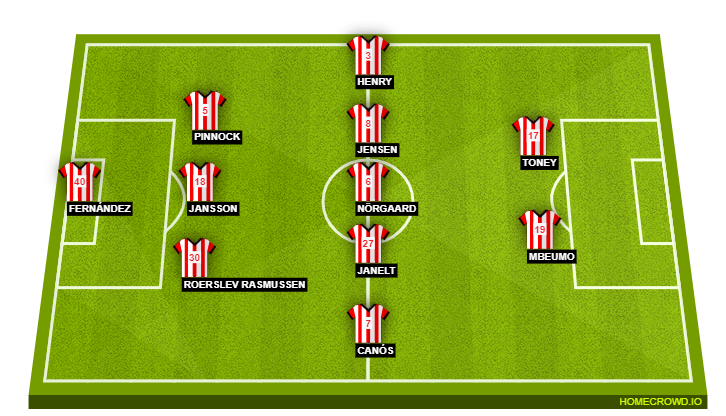 Unlike his counterpart in the Brentford dugout, Rafael Benitez has barely been given any reprieve on the team news front ahead of the trip to the Brentford Community Stadium. On Sunday, the Everton manager will have to make do without as many as six first-team players.

The good news comes with the possibility of Abdoulaye Doucoure, Allan and Demarai Gray all being fit. Doucoure, in particular, will face a late fitness test to determine his availability but should be healthy enough to make the starting lineup.

The boss provides an update on Abdoulaye Doucoure…

However, Yerry Mina (hamstring), Andre Gomes (calf), Tom Davies (knee) and Dominic Calvert-Lewin (thigh) all remain sidelined due to their respective injuries. In addition, Mason Holgate will be serving the second of his three-match ban, while Richarlison is also banned after picking up his fifth yellow card of the season last weekend against Manchester City.

With Richarlison and Calvert-Lewin missing, Salomon Rondon will return to the starting lineup to lead the line for Everton, with Gray playing off him. Out wide, Andros Townsend and Anthony Gordon will provide a direct threat and will hope to trouble the Brentford centre-backs.

As for the midfield unit, Doucoure and Allan should be fit enough to feature in the double pivot, leaving Fabian Delph as a backup option. Meanwhile, the defensive unit will feature Ben Godfrey, Michael Keane, Lucas Digne and Seamus Coleman, each of whom need to step up massively. Finally, in goal, there is no looking past Jordan Pickford. 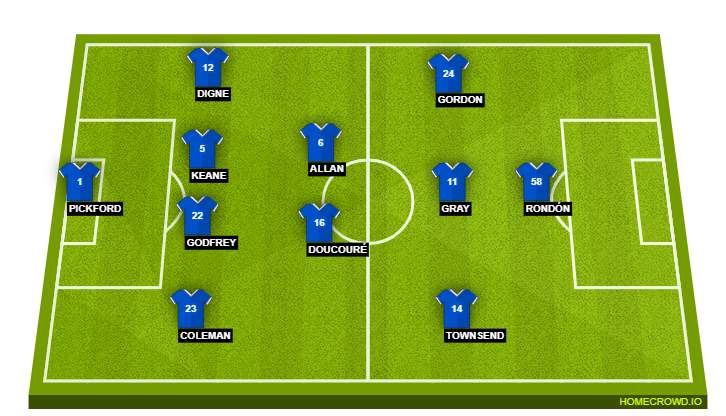 If there is one player whose poor performances have mirrored Everton’s struggles in recent weeks, it is Andros Townsend. The Englishman was on top of the world when he earned Everton a draw against Manchester United. However, he has gone completely off the boil since then, as have the Toffees.

With Everton in desperate need of some inspiration, Townsend will need to come up clutch to pave the way for a turnaround, especially with Richarlison and Dominic Calvert-Lewin sidelined. Can the former Tottenham winger make a meaningful impact against Brentford? Only time will tell.

Sunday’s game at the Brentford Community Stadium features two teams in desperate need of a win to turn their fortunes around. Unfortunately for Everton, their struggles will likely continue. After all, in the absence of Dominic Calvert-Lewin and Richarlison, there is hardly any source for goals, with Salomon Rondon struggling to settle down at the club.

However, with Alvaro Fernandez struggling to provide a reliable presence in the Brentford goal, Everton could find a way to score once. But the Toffees’ own frailties at the back will give Brentford an even bigger way into the game, with Ivan Toney likely to be at the forefront of a match-winning display.

So, The Hard Tackle predicts a 2-1 win for Thomas Frank & co. in a result that will help them leapfrog Everton on the Premier League table.