Liverpool will aim to build on their wins this past week when they welcome Southampton to Anfield on Saturday.

Premier League action resumes this weekend, with Gameweek 13 of the 2021/22 season kicking off on Saturday. Liverpool will be in action on the day and will have the chance to temporarily close the gap to table-toppers Chelsea to one point when they play hosts to Southampton at Anfield.

Liverpool have established themselves as the most fearsome English team this season, with Sadio Mane rediscovering his best touch to form an authoritative attacking partnership with Mohamed Salah. The Reds have lost just once all season thus far, with that defeat to West Ham United leaving them four points adrift of Premier League leaders Chelsea.

However, they have bounced back well in the last two games, beating Arsenal 4-0 last weekend before getting past FC Porto in the UEFA Champions League earlier this week. On the other hand, Southampton unsurprisingly find themselves in the bottom half of the table because of a rather frugal attacking unit.

The Saints have improved their defensive output significantly this season, conceding the joint fifth-least number of goals thus far in the ongoing campaign. However, the attacking unit has been the Achilles heel for Southampton, who have managed to score only 11 times in 12 top-flight games.

The corresponding fixture last season saw Liverpool eke out a 2-0 win over Southampton, with Sadio Mane and Thiago Alcantara finding the back of the net. Ahead of the latest meeting between the two sides, The Hard Tackle takes a closer look at the encounter.

Jürgen Klopp is LIVE to preview our clash with @SouthamptonFC 🎙️ #LIVSOU https://t.co/2aoIcnTfGi

Jurgen Klopp does not have any fresh injury concerns hampering his preparations ahead of the visit of Southampton. On Saturday, the Liverpool manager will continue to be bereft of the services of as many as five first-team players.

Joe Gomez (calf), Naby Keita (hamstring), Curtis Jones (eye), Harvey Elliott (ankle) and Roberto Firmino (hamstring) all remain on the sidelines with Gomez, Keita and Firmino inching closer to their return dates. However, the good news is that Diogo Jota and Andrew Robertson have recovered sufficiently from the knocks they have suffered recently.

Robertson should return to the starting lineup for the first time since the end of the international break, with Trent Alexander-Arnold being recalled as the other full-back after being rested earlier in the week against FC Porto. Virgil van Dijk will return to the heart of the Liverpool defence, where he should have Joel Matip for company. In goal, there is no looking past Alisson Becker.

Fabinho will sit at the base of Liverpool’s three-man midfield unit, with the Brazilian looking to set a quick tempo to the game. Fabinho will receive defensive support from midfield partners Jordan Henderson and Thiago Alcantara, who will look to push Liverpool forward with intent.

Finally, there is no looking past Sadio Mane, Mohamed Salah and the fit-again Diogo Jota in the final third. As a result, Takumi Minamino will drop down to the bench after featuring from the get-go against FC Porto. The Japanese international and Divock Origi will be the backup attacking options. 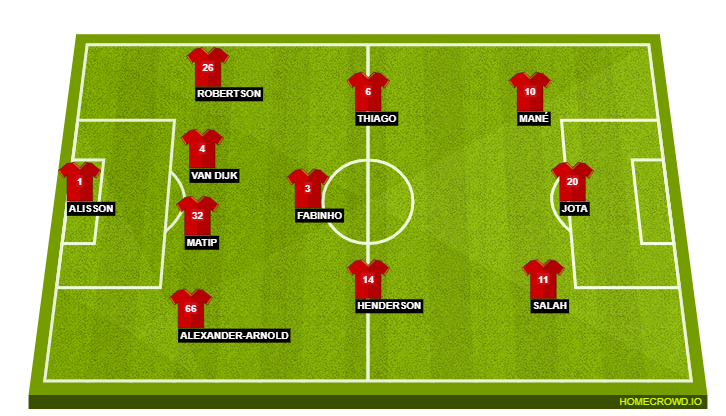 Like his counterpart in the Liverpool dugout, Ralph Hasenhuttl does not have new fitness issues to contend with ahead of the trip to Anfield. On Sunday, the Southampton manager will have to make do without only two first-team players.

Jack Stephens is still sidelined with a knee injury but should be fit enough to return to action in a week. The other absentee for Southampton is Stuart Armstrong, who is recovering from a calf injury at the moment.

The absence of neither player hurts Southampton too much, with Mohammed Salisu and Jan Bednarek combining superbly at the heart of the defence, while Mohamed Elyounoussi has become a key player in the wide-attacking slots for the Saints.

Elyounoussi should be stationed on the left side of the Southampton attack, with Nathan Redmond likely to pip Theo Walcott to the spot on the right flank. Che Adams and Adam Armstrong will form the strike partnership again, leaving Armando Broja as an option on the bench.

At the opposite end of the pitch, Alex McCarthy picks himself in the Southampton goal, with Kyle Walker-Peters and Valentino Livramento being the two full-backs. Finally, James Ward-Prowse and Oriol Romeu will be deployed in the middle of the park in a defensive-minded double pivot, with the duo looking to keep things tight. 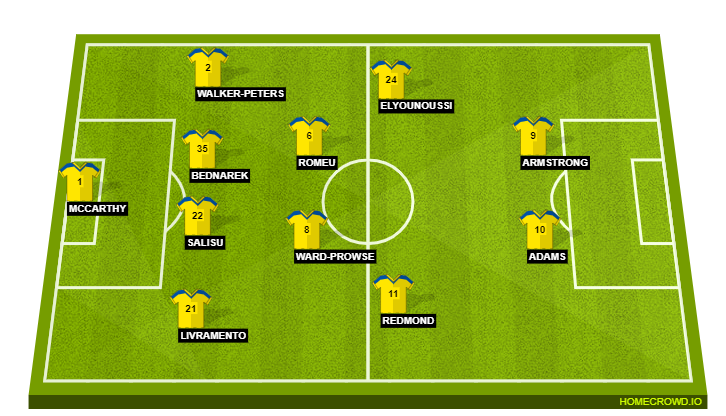 While the spotlight will invariably be on the in-form attacking duo of Mohamed Salah and Sadio Mane, the Player to Watch for us in this fixture is Thiago Alcantara. That is because the Spanish international appears to be finally showing what the fuss was all about when he arrived from Bayern Munich last year.

After one year of struggles due to injuries and teething problems, Thiago appears to have settled down well and is now starting to make one of the three midfield slots in the Liverpool side his own. Fresh off scoring a top-class goal for the Reds in the UEFA Champions League, Thiago will hope to show once again that he means business for the Merseyside giants amid interest from Barcelona.

Saturday’s encounter is bound to be one of the trickiest fixtures of the season thus far for Liverpool. The Reds are the resounding favourites to beat Southampton but will likely be made to work hard to earn the three points.

As iterated earlier, Southampton seldom concede a goal in the first half, which could end just as it will start. However, expect Liverpool to turn the screws in the final 45 minutes of the game, with Sadio Mane and Mohamed Salah coming to the fore in a big way following some relentless pressure post the interval.

To that end, The Hard Tackle predicts a 2-0 win for Jurgen Klopp & co. With Chelsea and Manchester City slated to play their respective games on Sunday, the result will help Liverpool heap the pressure on their title rivals with a key win heading into a busy December.