Chelsea will be hoping to claw their way back in contention to top the UEFA Champions League Group H when they welcome Juventus to Stamford Bridge.

The group stage of the 2021/22 edition of the UEFA Champions League is approaching its climactic end, with the penultimate matchday kicking off on Tuesday. Chelsea and Juventus will play the marquee fixture on the day at Stamford Bridge, battling it out to reign supreme in Group H.

Chelsea have been in solid touch thus far in 2021/22, losing just two games. One of those defeats have coincidentally come against Juventus, but for the most part, the Blues have shown little signs of slowing down their charge under the tutelage of Thomas Tuchel. The latest exhibition of their dominance came in the 3-0 win over Leicester City on the weekend.

On the other hand, Juventus have been imperious in the UEFA Champions League, winning each of their first four games to open up a three-point lead at the top of Group H. Back home, their fortunes have been improving following a slow start to the season, with the Bianconeri clinching a crucial 2-0 win over Lazio this past weekend.

The reverse fixture, played at the Allianz Stadium in September, saw Juventus eke out a 1-0 win over Chelsea, with Federico Chiesa scoring the game’s only goal. Ahead of the latest meeting between the two sides, The Hard Tackle takes a closer look at the encounter.

It's time to hear from Thomas Tuchel and Trevoh Chalobah ahead of our #UCL clash with Juventus! 🎙 https://t.co/Kpyq8EirWL

Thomas Tuchel has greeted a mixed bag of updates on the team news front ahead of the visit of Juventus. On Tuesday, the Chelsea manager could be bereft of the services of as many as two first-team players.

The good news comes in the form of the potential return of Romelu Lukaku and Timo Werner. Both the strikers have trained in the build-up to the game and could be in contention to feature in some capacity against Juventus. So, Mateo Kovacic is the only player to be definitively ruled out of the fixture due to a hamstring injury.

However, there are some doubts over the availability of Kai Havertz, who sustained a minor hamstring injury last time out against Leicester City. Tuchel has said that his fitness will be closely monitored ahead of Tuesday, meaning the German international could be on the bench against Juventus.

In his stead, Callum Hudson-Odoi could be given the chance to lead the line for Chelsea, having done so on the odd occasion previously. The space vacated by Hudson-Odoi is likely to be taken up by Hakim Ziyech, who has been somewhat of a regular for Chelsea in the UEFA Champions League, while Mason Mount picks himself in the third attacking slot.

Jorginho has shown no ill effects of the knock he sustained on the weekend and should be in the starting lineup against Juventus. N’Golo Kante will line up alongside him in the midfield, buoyed by the goal he scored versus Leicester.

The only other significant change comes in defence, with Cesar Azpilicueta returning to the back three, lining up alongside Thiago Silva and Antonio Rudiger. Reece James and Ben Chilwell remain automatic picks for the wing-back slots, while Edouard Mendy is a certainty in goal. 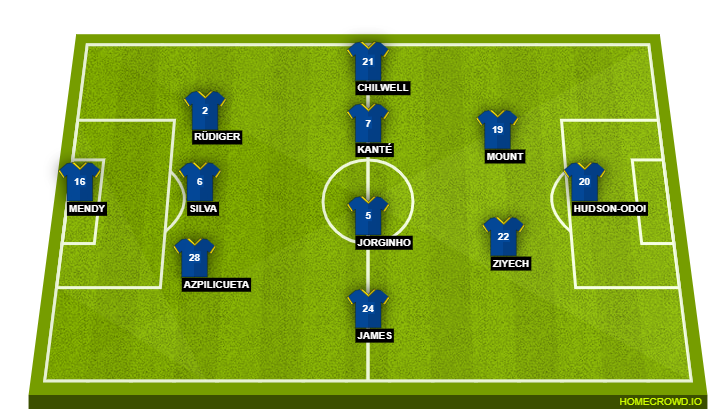 Like his counterpart in the Chelsea dugout, Massimiliano Allegri has faced both good and bad news off the pitch ahead of the trip to Stamford Bridge. On Tuesday, the Juventus manager will have to make do without as many as five first-team players.

Danilo is unavailable for a couple of months after picking up a thigh injury on the weekend. In the Brazilian’s stead, Juan Cuadrado ought to line up as the right-back for Juventus, with Alex Sandro starting on the left flank. At the heart of the Juventus defence, there is no looking past Leonardo Bonucci and Matthijs de Ligt.

Coming back to the team news, the good news comes in the form of Paulo Dybala’s return to the matchday squad. The Argentine is back at Allegri’s disposal, just like Alex Sandro, Dejan Kulusevski and Weston McKennie.

Like Dybala, McKennie should also feature, taking his place in the middle of the park alongside Manuel Locatelli. The duo will look to keep things tight in the midfield, getting defensive support from Adrien Rabiot. Federico Chiesa will provide the legs from the right flank.

Dybala’s return means he should slot in along with Alvaro Morata in the Juventus strike partnership. At the opposite end of the pitch, Wojciech Szczesny essentially picks himself and will hope to provide a reliable presence between the sticks. 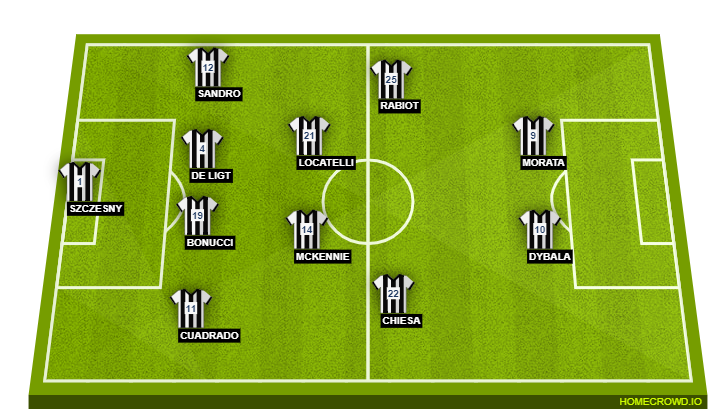 Pulisic might not start against Juventus, but his comeback trail will likely continue with another appearance off the bench. And it is this outing that will hold the key for the USMNT international, especially with Romelu Lukaku and Timo Werner nearing their returns.

Pulisic made an impression on the weekend by coming off the bench to score the third goal in the 3-0 win over Leicester. A similar performance here will give Thomas Tuchel some food for thought as he looks to rotate his troops efficiently and effectively.

Chelsea might have suffered a crucial defeat to Juventus in the reverse fixture, but they look to be much more settled this time around. The Blues have plugged just about every goal at the back, with Juventus unlikely to trouble Edouard Mendy much on Tuesday.

At the opposite end, the wealth of attacking talent should get the better of the Juventus defenders eventually, thereby paving the way for two late goals to seal the deal. So, The Hard Tackle predicts a 2-0 win for Chelsea to go to the top of Group H, leapfrogging their visitors in the process.