Lazio and Juventus will meet at Stadio Olimpico on Sunday in the heavyweight clash in Serie A of the weekend, with a win of utmost importance.

The international break is done and dusted, with the next such dreaded period four months away. In Serie A, Matchday 13 of the 2021/22 season kicks off on Saturday, with the marquee fixture in the latest round of fixtures set to be played between Lazio and Juventus at Stadio Olimpico.

Lazio have been slow off the blocks under the tutelage of Maurizio Sarri. The Biancocelesti have won just six of their opening 12 Serie A fixtures, with defensive frailties proving to be their undoing. However, the third-best attacking unit in Serie A has helped them rise to fifth in the standings, and a top-four battle seems to be awaiting them this season.

On the other hand, Juventus have somehow tailed off despite the return of Massimiliano Allegri. While the Bianconeri have a perfect record in the UEFA Champions League, they have won only five of their first 12 games in Serie A. As a result, they are already a staggering 14 points adrift of Napoli and AC Milan, with a title tilt appearing unlikely as things stand.

The corresponding fixture last season ended in a 1-1 draw between Lazio and Juventus, as Felipe Caicedo scored in injury time to cancel out Cristiano Ronaldo’s 15th minute strike. Ahead of the latest meeting between the two sides, The Hard Tackle takes a closer look at the encounter.

Maurizio Sarri has been dealt a major blow on the team news front ahead of the visit of Juventus. On Saturday, the Lazio manager will only be bereft of the services of three first-team players, but the latest player to be sidelined is the most pivotal figure for the club.

The player in question is Ciro Immobile. The veteran striker has been in fine form this injury but is set to spend a month on the sidelines after sustaining a calf injury while on international duty with Italy. The other absentees for Lazio are Adam Marusic and Bobby Adekanye.

Sarri was also sweating over the fitness of Pedro heading into the game, but it has now emerged that the former Barcelona forward is fit to take on Juventus. Hence, Pedro ought to take his  place on the left flank, with Felipe Anderson a certainty on the right-hand side. In Immobile’s absence, Vedat Muriqi will lead the line for Lazio.

In midfield, Sarri does not have any shortage of options, with Danilo Cataldi set to sit at the base of the three-man unit. The 27-year-old will receive defensive support from Luis Alberto and Sergej Milinkovic-Savic, with the duo primarily aiming to provide the creative impetus from the middle of the park.

At the heart of the Lazio defence, there is no looking past Luiz Felipe and Francesco Acerbi, while out wide, Manuel Lazzari and Elseid Hysaj are automatic picks as the full-backs. Finally, in goal, Pepe Reina should get the nod ahead of Thomas Strakosha. 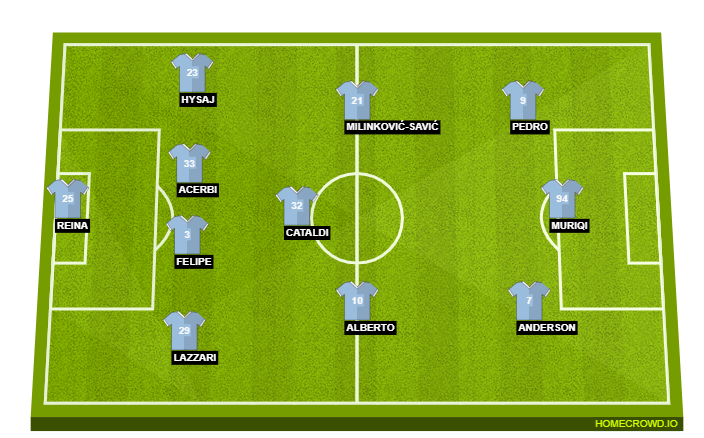 As is the case with his counterpart in the Lazio dugout, the international break ended with some key casualties for Juventus. Ahead of the trip to Stadio Olimpico on Saturday, Massimiliano Allegri will have to make do without five first-team players.

Giorgio Chiellini has sustained an Achilles injury, joining Mattia De Sciglio (hamstring) on the sidelines. Aaron Ramsey is another player to have picked a fitness issue, with the Welsh midfielder sustaining a heavy knock. The major absentee for Juventus, though, will be senior attacker, Paulo Dybala, while Federico Bernardeschi misses out as well.

With his attacking options limited severely, Allegri will bank on the strike partnership of Alvaro Morata and Federico Chiesa to deliver the goods for him. The four-man midfield unit should have Adrien Rabiot lining up on the left flank, with Juan Cuadrado picking himself on the right-wing.

Cuadrado will provide a major threat with his directness. At the same time, Rabiot’s presence on the left-hand side will ensure that Juventus will not be outnumbered by Lazio in the middle of the park, with Weston McKennie and Manuel Locatelli sitting deep and looking to contain Luis Alberto and Sergej Milinkovic-Savic.

In Chiellini’s absence, Matthijs de Ligt is set to get a run of starts at the heart of the Juventus defence, where he will pair up with Leonardo Bonucci. Out wide, Danilo and Alex Sandro will be the two full-backs, while in goal, Wojciech Szczesny should get the nod over Mattia Perin. 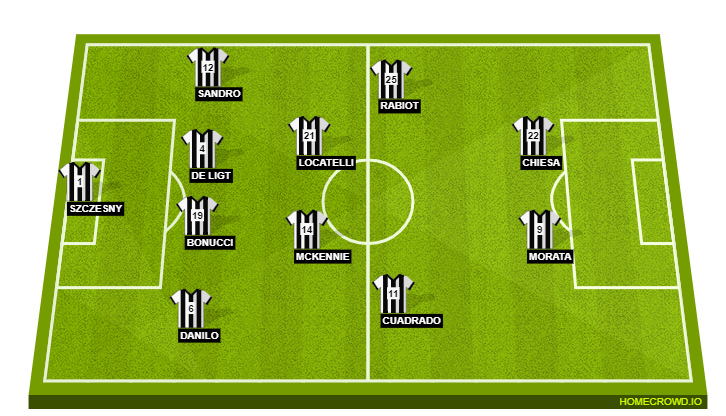 Juventus have not been renowned this season for scoring a lot of goals, with Paulo Dybala the only attacker to consistently make his mark. However, with the Argentine international sidelined with a muscle injury, the other members of the Juventus attacking unit will need to pull their weight, none more so than Alvaro Morata.

The 29-year-old striker has done nothing to show why Juventus should sign him permanently from Atletico Madrid. However, in the wake of scoring the goal that booked Spain’s place at the 2022 FIFA World Cup, Morata should be in a buoyant mood, which is likely to bode well for Juventus when they take on Lazio. Will Morata deliver the goods for the Bianconeri this weekend?

Saturday’s match is unlikely to be a goal-fest, especially with Lazio missing their most important player in Ciro Immobile. The Italian international’s absence tips the scales in favour of the visitors, even though they are also heading into the match without some key players.

However, with Alvaro Morata getting a shot in the arm following his exploits with Spain, Juventus should do enough to grab a win by the odd goal. However, their run of scoring just one goal in a game continues, and The Hard Tackle predicts a 1-0 win for Massimiliano Allegri & co. in what will be a big win for them.