Leicester City and Chelsea will hope to return to winning ways when they lock horns at the King Power Stadium on Saturday.

The dreaded international break is behind us, and Gameweek 12 of the 2021/22 season will kick off on Saturday in the Premier League. The weekend’s first match will feature the current table-toppers Chelsea, who will lock horns with Leicester City at the King Power Stadium.

The 2021/22 season has not been memorable for Leicester City, who have struggled to stitch together winning runs to release the pressure and climb up the standings. The Foxes have failed to win each of their last two games, and as a result, they find themselves tottering at 12th on the table.

On the other hand, Chelsea have been the pace-setters in the Premier League in the Premier League this season and heading out of the recently-concluded international break, they are three points clear of second-placed Manchester City. The Blues have dropped points only thrice so far in the top-flight, including in their most recent clash, which ended in a 1-1 draw with Burnley.

The corresponding fixture last season saw Leicester City clinch a 2-0 win over Chelsea, with Wilfred Ndidi and James Maddison on target. Ahead of the latest meeting between the two sides, The Hard Tackle takes a closer at the encounter.

The manager has been speaking to the media ahead of #LeiChe🗣

“Their level is really high. When you play the big teams, you need to be at the top of your game and be relentless. We are looking forward to the challenge, they are a fantastic team and we will be ready for them.” 💪 pic.twitter.com/SYyPXJw9LP

Brendan Rodgers does not have any fresh injury concerns hampering his preparations ahead of the visit of Chelsea. On Saturday, the Leicester City manager will have to make do without three first-team players.

The major absentee for the Foxes is Youri Tielemans, who is out until December due to the calf injury he sustained last time out against Leeds United. In addition, Wesley Fofana (leg) and James Justin (knee) remain unavailable for the foreseeable future.

In Fofana’s continued absence, Jonny Evans and Caglar Soyuncu will continue to pair up at the heart of the Leicester defence. Out wide, Ricardo Pereira and Timothy Castagne will start as the two full-backs, with captain Kasper Schmeichel taking his place in goal.

Boubakary Soumare picks himself in the midfield double pivot in the absence of Tielemans, with Wilfred Ndidi sitting alongside him in a defensive-minded partnership. The creative onus will be on James Maddison, who will look to release Jamie Vardy on his runs while finding wide men Harvey Barnes and Ademola Lookman on the flanks in pockets of spaces. 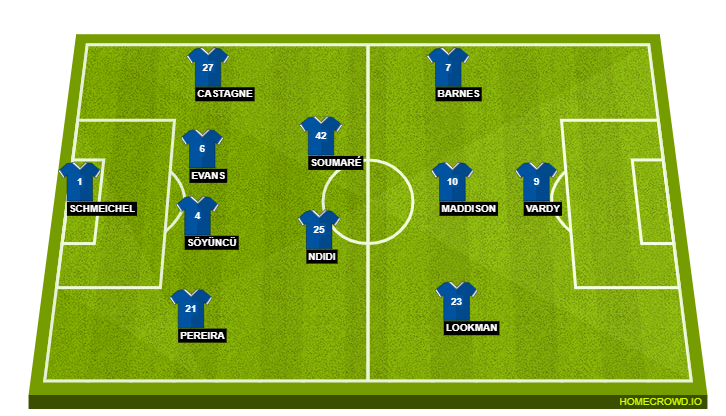 Unlike his counterpart in the Leicester City dugout, Thomas Tuchel has been handed a twin boost on the team news front ahead of the trip to the King Power Stadium. However, much like Brendan Rodgers, the Chelsea manager is missing a couple of key players.

Romelu Lukaku (ankle) and Mateo Kovacic (hamstring) remain on the sidelines and will only be back in contention to feature in the coming week. However, Timo Werner (hamstring) should be fit and available after resuming training this week. In addition, Mason Mount is set to return after undergoing dental surgery.

Time to hear from Thomas Tuchel ahead of #LEICHE tomorrow lunchtime! 🎙 https://t.co/ri030p1fQU

Mount should slot into the starting lineup right away, slotting alongside Callum Hudson-Odoi and Kai Havertz in the attacking unit. The English international will pull the strings higher up the pitch, while Hudson-Odoi and Havertz will pose a threat with their movement, with Tuchel giving them the freedom to roam in the final third.

The two wing-backs will once again hold the key for Chelsea, with Reece James and Ben Chilwell looking to exploit the defensive vulnerabilities of Timothy Castagne and Ricardo Pereira. In the middle of the park, N’Golo Kante and Jorginho will focus on providing a solid base from midfield.

As for the defensive unit, Cesar Azpilicueta is in line to return to the lineup, with Andreas Christensen expected to make way for the Chelsea captain. Azpilicueta will feature alongside Thiago Silva and Antonio Rudiger in the back three, with Edouard Mendy taking his place in goal. 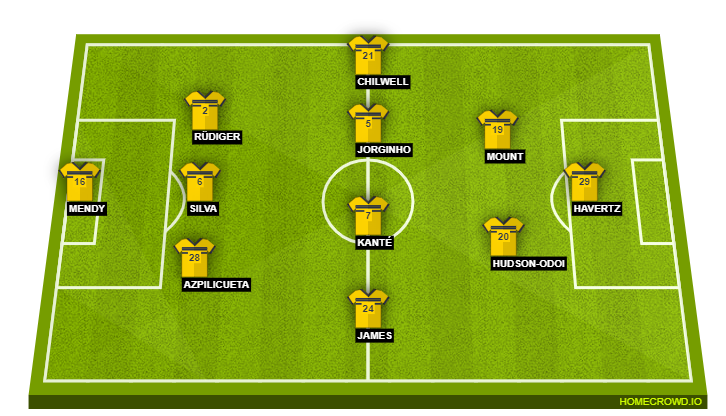 The two Chelsea wing-backs have been unstoppable lately. However, Kai Havertz is once again our Player to Watch in a Chelsea game, as he is given another chance to stake a claim for a regular role in the Blues’ starting lineup in the continued absence of Romelu Lukaku.

With Callum Hudson-Odoi going from strength to strength, Havertz has it all to do to tip the scales in his favour. The German international will fancy his chances against a frail Leicester City defence, though. It will be interesting to see if Havertz can grab his opportunity with both hands on Saturday.

Burnley might have given the rest of the Premier League a clue about how they should approach games against Chelsea. Granted, it took an error in judgement for the Clarets to pounce, but it still did the trick. Having said that, Kasper Schmeichel will have it all to do if he is to keep Leicester City in the game.

In addition, neither Timothy Castagne nor Ricardo Pereira inspires much confidence in their defensive abilities. And with the wing-back duo of Ben Chilwell and Reece James in blistering form, it looks like Chelsea will have more than enough quality to grab all three points here, possible with a clean sheet in tow.