England will hope to book their place at the 2022 FIFA World Cup when they welcome Albania to Wembley in a Group I tie on Friday.

The first stage of the European leg of the FIFA World Cup 2022 Qualifiers will conclude this month, with each of the automatic placeholders set to be confirmed. England will aim to secure the top spot in Group I at long last when they play hosts to Albania at Wembley on Friday evening.

England have been largely solid in their FIFA World Cup 2022 Qualifiers campaign, proving that their exploits in recent years, particularly at UEFA Euro 2020, were no flash in the pan. However, lately, the Three Lions have produced a couple of underwhelming displays, having been held to 1-1 draws by Polan and Hungary either side of a 5-0 win over Andorra.

On the other hand, Albania have been one of the more impressive teams in the FIFA World Cup 2022 Qualifiers. While the Red and Blacks are two points behind second-placed Poland, the fact that they are even in a position to seal a playoffs spot has left many sit up and take note of their exploits.

The reverse fixture, played at Arena Kombetare back in March, saw England eke out a 2-0 win over Albania, with Harry Kane and Mason Mount on target. Ahead of the latest meeting between the two sides, The Hard Tackle takes a closer look at the encounter.

Join us live from St. George's Park as Gareth Southgate and @HKane speak to the media ahead of tomorrow night's game against Albania 🎙 https://t.co/jRqiT2bg9a

Gareth Southgate has been handed a major blow on the team news front ahead of the visit of Albania. The England head coach, who had already made some major changes to his squad, has seen three players withdraw their names from the squad.

Declan Rice and Marcus Rashford are major absentees, with James Ward-Prowse the third player to pull out. In addition, Southgate is sweating over the availability of Mason Mount and Luke Shaw, with neither player expected to start against Albania.

Southgate should line his side up in his usual 4-2-3-1 formation, with Jordan Pickford taking his customary place in goal. In front of the 27-year-old, John Stones and Harry Maguire should form the central defensive partnership, with Kyle Walker and Ben Chilwell being the two full-backs for England.

Jordan Henderson and Kalvin Phillips pick themselves in the double pivot in the absence of Rice, with Phil Foden being the advanced midfielder for England. Off the ball, the formation will morph into a 4-3-3, with Foden essentially reprising the no. 8 role in the game.

Raheem Sterling will hope to continue his fine run of form for England even as his future at club level continues to be increasingly uncertain. Manchester City teammate Jack Grealish will be the other wide man for the hosts, with Harry Kane leading the line for the Three Lions. 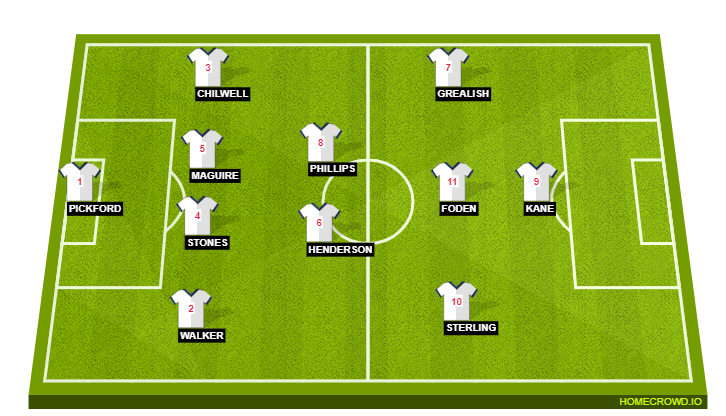 Unlike his counterpart in the England dugout, Edoardo Reja has not been pegged back by player withdrawals ahead of the trip to Wembley. However, just like Gareth Southgate, the Albania head coach has chopped and changed a little this month, with Berat Djimsiti the major absentee for the visitors.

The 28-year-old continues to remain unavailable due to a fractured forearm. However, Reja has been boosted by the return of Endri Cekici, who has served his suspension and will be in line to take on England.

Reja will line his side up in a 3-4-1-2 formation, with the front three forming the first line of press. Speaking off the attacking unit, Armando Broja will get the opportunity to lead the line for Albania along with Sokol Cikalleshi, with Nedim Bajrami playing off the two strikers.

Ylber Ramadani and Keidi Bare will have the onus on them to keep things tight in the middle of the park, stifling Phil Foden and his creative output. Lorenc Trashi and captain Elseid Hysaj will be the two wing-backs for Albania, with the duo in charge of providing the width higher up the pitch.

Marash Kumbulla will hope to remain compact and disciplined at the back, along with Ardian Ismajli and Frederic Vaseli being his partners in the back-three. Finally, in goal, Etrit Berisha should pip Thomas Strakosha to the spot between the sticks. 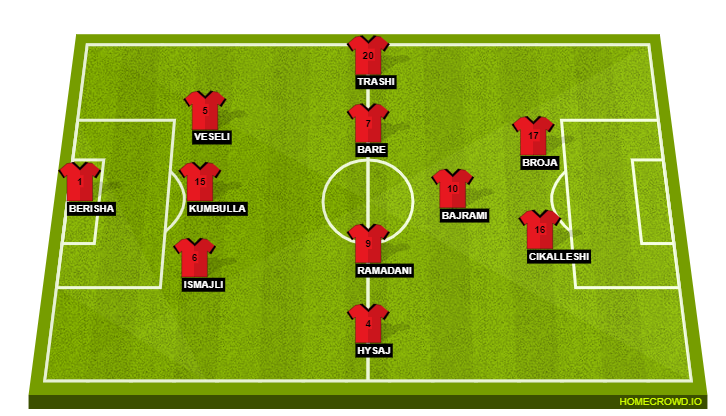 His fortunes at club level might continue to be increasingly uncertain. However, there is very little stopping Raheem Sterling in international football, where he remains a pivotal figure for England. Now, with qualification to the FIFA World Cup 2022 essentially just a win away, it will be up to Sterling to help deliver the goods for the hosts.

The last few games have shown a soft underbelly when it comes to England and their defence. The Three Lions have conceded unnecessary goals against Poland and Hungary, which should also be the case against an Albania side that needs all three points to remain alive in the FIFA World Cup 2022 Qualifiers.

However, unlike what happened in their two draws so far, England should have done enough to score one more goal than Albania, eking out a narrow 2-1 win to clinch the all-important three points.