Liverpool will aim to keep up the pressure on Premier League leaders Chelsea when they take on West Ham United at the London Stadium on Sunday.

The international break is nearly here, with Sunday the last day of club footballing action for almost two weeks. And Gameweek 11 of the 2021/22 Premier League season will draw to a close with an enticing fixture at the London Stadium, where West Ham United will play hosts to Liverpool.

West Ham United seem to have continued from where they left off in the 2020/21 season, as they have emerged as early contenders for a top-six finish if not top-four. The Hammers have also been in fine touch in Europe, where they are unbeaten in four group stage games in the UEFA Europa League, although they did drop points last time out in a 2-2 draw with KRC Genk.

On the other hand, Liverpool are one of the in-form teams in Europe at the moment. While the Reds have hardly ever been perched atop the Premier League table in the first ten gameweeks, they are the only team yet to face defeat in the top-flight. Jurgen Klopp & co. are also one of only two unbeaten English clubs in Europe this season, the other team being West Ham.

Last season’s corresponding fixture saw Liverpool claim a comfortable 3-1 win, with Mohamed Salah and Georginio Wijnaldum on target, while Craig Dawson scored for West Ham. Ahead of the latest meeting between the two sides, The Hard Tackle takes a closer look at the encounter.

🗣 "Andriy had a little bit of an injury before we went away to Genk and Nikola as well, so we’ll see how they are."#WHULIV

David Moyes barely has any injury concerns hampering his preparations ahead of the visit of Liverpool. On Sunday, the West Ham United manager might only be bereft of the services of two first-team players in the worst-case scenario.

Andriy Yarmolenko and Nikola Vlasic (both knocks) are the only players who could miss out against Liverpool, although they are only minor doubts. However, Moyes might not be sweating over their unavailability too much, considering neither is expected to start anyway.

The key decision for the West Ham manager will be the choice of right-back. Vladimir Coufal was in decent touch against KRC Genk earlier this week, but Ben Johnson could get the nod due to his brilliant form in recent weeks. There is no looking past Aaron Cresswell on the opposite flank, while at the heart of the West Ham defence, Kurt Zouma and Angelo Ogbonna pick themselves.

Up ahead in midfield, Declan Rice will reunite with Tomas Soucek, with Mark Noble, who started in the Europa League game on Thursday, dropping to the bench. As for the attacking unit, Michail Antonio will lead the line for West Ham against Liverpool. The 31-year-old will be supplemented by the usual suspects in Jarrod Bowen, Said Benrahma and Pablo Fornals. 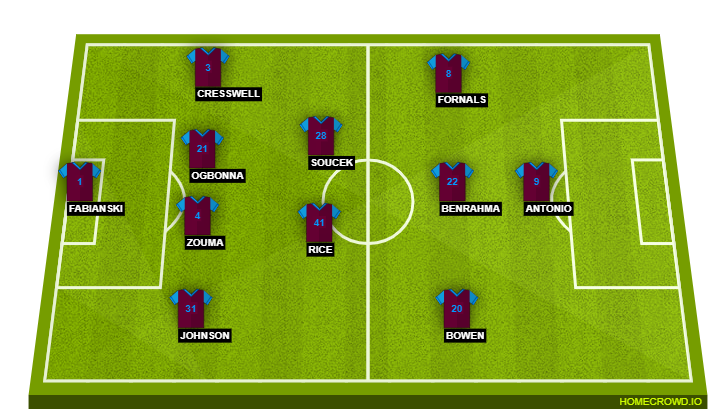 Unlike his counterpart in the West Ham United dugout, Jurgen Klopp has a fresh fitness issue to deal with ahead of the trip to the capital. At the London Stadium on Sunday, the Liverpool manager will be without six first-team players.

Roberto Firmino is the latest player to pick up an injury. The Brazilian forward is unavailable for the foreseeable future because of a hamstring injury he picked up against Atletico Madrid earlier this week. Firmino has joined Joe Gomez (calf), Curtis Jones (eye), James Milner (hamstring), Naby Keita (hamstring) and Harvey Elliott (ankle) on the sidelines.

📋 Get the latest #WHULIV team news from the boss ⤵

With half a dozen players unavailable, some of Klopp’s team selection decisions will be forced upon him. For example, in midfield, Jordan Henderson, Fabinho and Alex Oxlade-Chamberlain essentially pick themselves, especially with Thiago Alcantara still regaining sharpness following a long spell on the sidelines due to a calf injury.

In attack, Diogo Jota becomes a certainty to lead the line for Liverpool in the absence of Firmino. Mohamed Salah and Sadio Mane are automatic picks out wide, leaving Divock Origi and Takumi Minamino as backup attacking options on the bench.

In goal, there is no looking past Alisson Becker, while in defence, Ibrahima Konate could come in for Joel Matip to be Virgil van Dijk’s central defensive partner. Out wide, Andrew Robertson is set to return to the starting lineup after being rested in the midweek European tie. On the opposite flank, Trent Alexander-Arnold picks himself as the right-back. 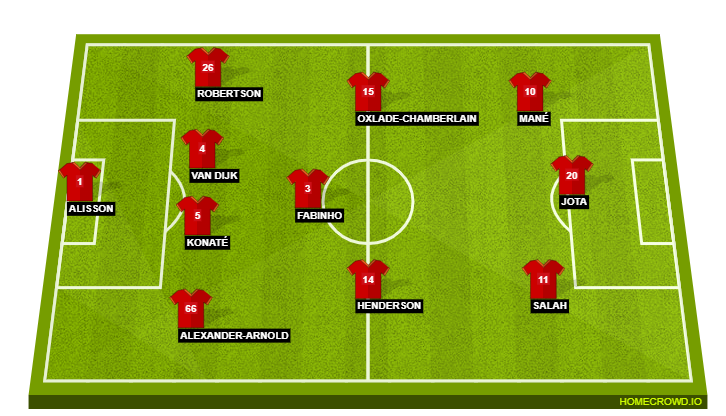 For most of his Liverpool career, Diogo Jota has impressed as a handy option to fill in the void of a first-choice attacker who is unavailable for one reason or another. While the Portuguese forward has carved out a rightful place for himself even when Roberto Firmino, Mohamed Salah and Sadio Mane are at Jurgen Klopp’s disposal, it is particularly when one of them is missing when he makes a bigger splash.

This weekend, Jota will fill in for Firmino, who is sidelined for multiple weeks after sustaining a hamstring injury. So, once again, the onus will be on the Portuguese international to give Klopp some food for thought by making a difference in a key game for Liverpool as they look to keep pace with Chelsea.

As things stand, Sunday’s game looks like one that could be too close to call. West Ham United have not troubled Liverpool a great deal in recent years, but David Moyes & co. have a different swagger about them right now. So, the Hammers could give the Reds a lot to worry about if they have taken any tips from Brighton & Hove Albion’s showing last weekend.

However, Liverpool are again proving to be the “mentality monsters” they were two seasons ago when they romped to the Premier League title in style. So, even if they are not in full flow, the visitors should find a way to grab all three points, with Mohamed Salah returning to the scoresheet after failing to find the back of the net in the last two games.