Borussia Dortmund will hope to keep pace with Bayern Munich at the top of the Bundesliga table when they take on RB Leipzig on Saturday.

The 2021/22 Bundesliga season continues this weekend with Matchday 11, the final round of fixtures ahead of the latest international break. Two of the biggest teams in Germany will be in action on Saturday, with Borussia Dortmund featuring in the final game on the day as they take on RB Leipzig at the Red Bull Arena.

RB Leipzig have been struggling in the post-Julian Nagelsmann era, having found it difficult to adjust to the methods of Jesse Marsch so far. While there have been some positive signs on show from Die Roten Bullen, they have largely faltered in key moments, be it in Bundesliga or Europe, where they most recently played out a 2-2 draw with Paris Saint-Germain.

On the other hand, Borussia Dortmund have been a case of having varied fortunes in domestic and European football. While in Bundesliga, Die Schwarzgelben have dropped points just twice, they have flattered to deceive in the UEFA Champions League, where they are lagging behind Ajax after suffering back-to-back heavy defeats at the hands of the Dutch giants, including one this week.

Last season’s corresponding fixture saw Borussia Dortmund grab a 3-1 win over RB Leipzig, with Erling Haaland scoring a match-winning brace. Ahead of the latest meeting between the two sides, The Hard Tackle takes a closer look at the encounter.

➡ Willi #Orban and @lukaskl96 are out of #RBLBVB. The pair are expected to be back after the international break.

Jesse Marsch has several pressing injury concerns hampering his preparations ahead of the visit of Borussia Dortmund. On Saturday, the RB Leipzig manager will have to do without as many as four first-team players.

Marcel Halstenberg (ankle), Lukas Klostermann (thigh), Willi Orban (thigh) and Marcelo Saracchi (knee) are all on the sidelines. The absence of Halstenberg and Klostermann, in particular, poses a major concern out wide, with Tyler Adams and Angelino being the two wing-backs for Leipzig on Saturday.

Speaking of building up attacking moves, Yussuf Poulsen should lead the line for Leipzig against Borussia Dortmund. Christopher Nkunku and Emil Forsberg will supplement the Danish striker, with the former likely to hold a greater threat in the final third.

At the back, the onus will be on Mohamed Simakan to keep the defensive line organised, with the 21-year-old set to have Nordi Mukiele and Josko Gvardiol for company in the three-man central defensive unit. Finally, in goal, there is no looking past Peter Gulacsi. 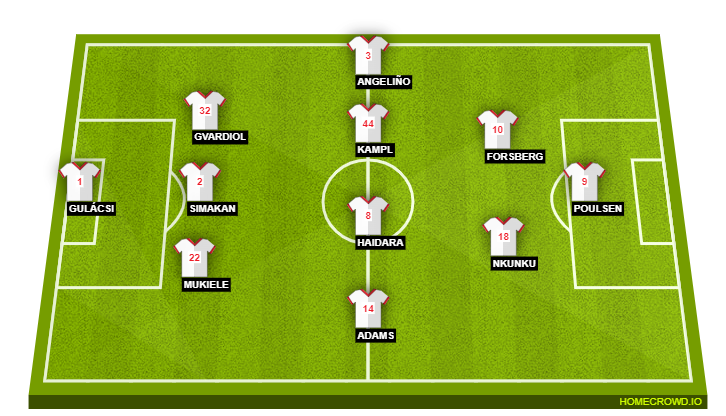 Unlike his counterpart in the RB Leipzig dugout, Marco Rose has a gamut of fitness issues to deal with ahead of the trip to the Red Bull Arena. On Saturday, the Borussia Dortmund manager will be bereft of the services of as many as nine first-team players.

“Gio is slowly getting better. We hope that we can gradually take further steps forward with him, but we cannot yet foresee when he will be back. Hopefully it will be something we can discuss again this year." pic.twitter.com/3WNTnSqe53

So, Rose is somewhat stretched for options, which means some of his choices may be forced upon him. Gregor Kobel will take his place in goal for Dortmund, who will line up in a 3-4-2-1 formation that will mirror the system in place for RB Leipzig to a great extent.

In front of the Swiss goalkeeper, the three-man central defensive unit should feature Mats Hummels, Manuel Akanji and Marin Pongracic. The German international’s proficiency on the ball will enable Dortmund to play out from the back smartly.

Up ahead in midfield, there is no looking past Jude Bellingham and Axel Witsel, while Thomas Meunier and Felix Passlack will be the two wing-backs. Finally, in attack, Thorgan Hazard could lead the line for Dortmund in the absence of Haaland, with Marco Reus and the resurgent Julian Brandt completing the unit in the final third. 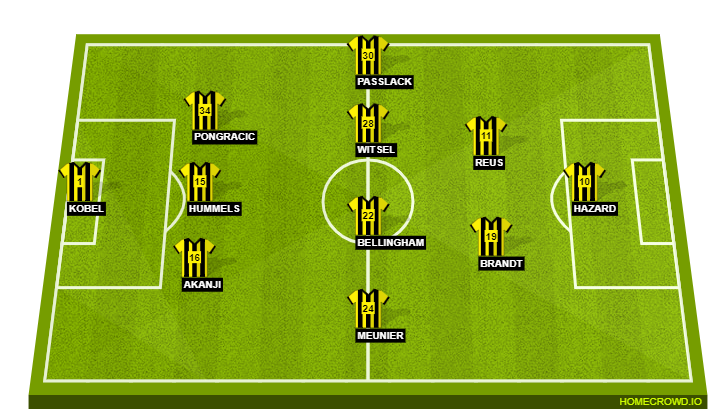 With Erling Haaland sidelined for the key fixture, the onus will be on Marco Reus to lead by example and deliver the goods by producing a game-changing performance. The Borussia Dortmund captain has not been in full flow in the 2021/22 season but has still managed a decent enough tally.

The 32-year-old has four goals and six assists in 16 appearances across all competitions and will have to boost his returns on Saturday if Borussia Dortmund are to take anything from this game. Will the German international step up? Only time will tell.

We might have predicted a 2-0 win for Borussia Dortmund. Still, the game will be anything but straightforward for the visitors, who will have their work cut out against an RB Leipzig side that has been showing signs of improvements in recent weeks despite not being at their best.

Having said that, the hosts could be wasteful in the final third, which will put the ball in Dortmund’s court. And Marco Reus should make a definitive impact, paving the way for a 2-0 win for Marco Rose & co. in a result that could keep them second or send them to the top of the table depending on how Bayern Munich fare against SC Freiburg.