Chelsea will hope to remain firmly perched atop the Premier League table when they welcome Burnley to Stamford Bridge on Saturday.

The dreaded international break is nearly upon us. However, before that, some serious business is to be attended, with Gameweek 11 being played in the Premier League. Table-toppers Chelsea will be in action on Saturday as they play hosts to Burnley at Stamford Bridge.

In the first couple of months of the 2021/22 season, Chelsea have been in fine form, continuing from where they left off the last term. Their only blemish came in a two-game run ahead of the last international break, as Juventus and Manchester City beat them in back-to-back games.

In the Premier League, the Blues have grabbed a stronghold on the top spot in the standings since early in the campaign and opened up a three-point gap to Liverpool and a five-point cushion to City last week, when both their fellow title contenders dropped points. On the other hand, Burnley are embroiled in the relegation dogfight, at least for now.

The Clarets have won just one of their first ten games thus far this season. While they have been typically frugal in front of goal, Sean Dyche & co. have uncharacteristically conceded cheap goals, which has pegged them back significantly. So, something has got to give if they are to turn their fortunes around.

Last season, the corresponding fixture saw Chelsea battle hard before beating Burnley 2-0, with Cesar Azpilicueta and Marcos Alonso on target for the hosts. Ahead of the latest meeting between the two sides, The Hard Tackle takes a closer look at the encounter.

Join us live as Thomas Tuchel looks ahead to #CHEBUR tomorrow! 🎙 https://t.co/D4U6NICw27

Thomas Tuchel has a fresh injury concern hampering his preparations ahead of the visit of Burnley. On Saturday, the Chelsea manager could be bereft of the services of as many as five first-team players due to various issues.

The latest player to be sidelined is Marcos Alonso, who is out for two weeks because of an ankle injury. The Spaniard has joined Mateo Kovacic (hamstring), Romelu Lukaku (ankle) and Timo Werner (hamstring) in the treatment room. Finally, there are doubts over the availability of Mason Mount.

The English playmaker is dealing with a tooth issue and will be assessed ahead of the game. Mount, though, should ideally be fit enough to start, with Hakim Ziyech expected to make way for him. Mount will likely join Callum Hudson-Odoi and Kai Havertz in the Chelsea attacking unit, with Ziyech and Christian Pulisic options on the bench.

Alonso’s absence means Ben Chilwell is a certainty in the left wing-back slot, although the English international was certain to start anyway. On the opposite flank, there is no looking past Reece James. The two wing-backs will flank N’Golo Kante and Jorginho, with Ruben Loftus-Cheek being a backup option.

At the back, Tuchel has an abundance of riches at his disposal. He is likely to be at full strength, with Cesar Azpilicueta, Thiago Silva, and Antonio Rudiger expected to start. Finally, in goal, there is no looking past Edouard Mendy. 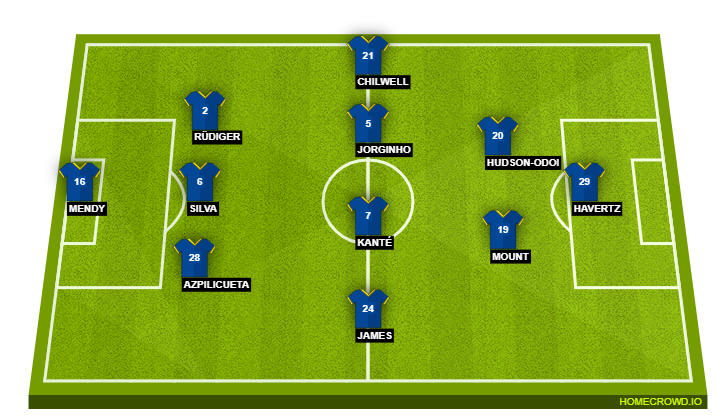 Unlike his counterpart in the Chelsea dugout, Sean Dyche barely has any fitness issues to deal with ahead of the trip to Stamford Bridge. On Saturday, the Burnley manager might only have to make do without two first-team players in the worst-case scenario.

Dale Stephens is certain to miss out for Burnley due to an ankle injury, which has ruled him out for the foreseeable future. In addition, Dyche is sweating over the fitness of Aaron Lennon, who has been recovering from an illness and might only be an option on the bench at best.

Dyche will line Burnley up in his usual 4-4-2 setup, with two blocks of four looking to stifle Chelsea in their build-up play. In the first line of the press, Chris Wood will likely have Maxwel Cornet for company, with the Ivory Coast international being the form player for Burnley.

In the middle of the park, Josh Brownhill and Ashley Westwood will be responsible for keeping things tight, thereby negating the influence of Jorginho and Mason Mount. Johann Berg Gudmundsson and Dwight McNeil will be the two wide midfielders, with the duo providing the creative impetus from midfield.

At the back, the onus will be on Ben Mee and James Tarkowski to keep a check on the movement of Kai Havertz. Matt Lowton and Charlie Taylor will be the two full-backs for Burnley, with the duo providing a threat with their deliveries into Wood. Finally, Nick Pope will take his customary place between the sticks for Burnley and could be a busy man against Chelsea. 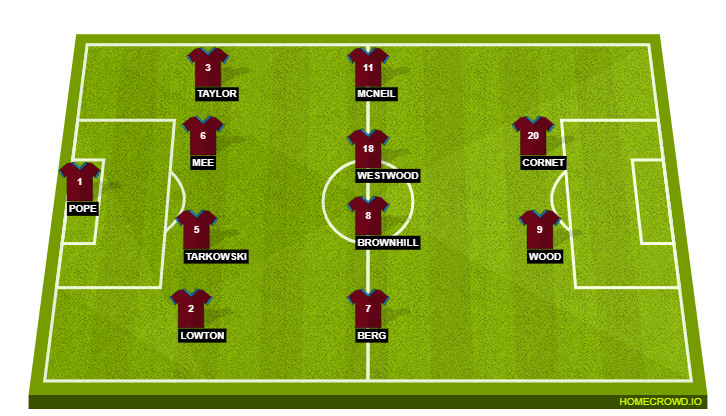 Havertz is starting to become a fixture in our Player to Watch segment week after week. The German international has not grabbed his opportunity with both hands in the absence of Romelu Lukaku and Timo Werner, with Callum Hudson-Odoi outshining him by a mile instead.

That there is no real alternative in the squad for him right now is helping Havertz’s case, but it is high time that he starts backing a run of starts with tangible returns. The 22-year-old does make a difference with his movement, but there has to be more to his game than just that when leading the line as a traditional striker instead of a false nine. He will need to make his chance count against Burnley.

There is only one result possible here. If Burnley manage to get anything from Saturday’s game, it will be the shock of the season heading into the latest international break. After all, Chelsea have been imperious in the Premier League for the most part, while the Clarets have made little to no impression in their games to date.

The rampaging wing-backs should be in their elements again, with Reece James and Ben Chilwell likely to make a meaningful impact again. In addition, Kai Havertz could also join the party, thereby facilitating a big win for Chelsea, which helps them retain their place atop the Premier League table.