Liverpool will have the chance to book their place in the Champions League Round of 16 when they welcome Atletico Madrid to Anfield on Wednesday.

Just two rounds of fixtures will remain to be played in the UEFA Champions League group stage when Matchday 4 culminates on Wednesday, as we approach the decisive phase of the opening period of the competition. The marquee fixture of the matchday will be played at Anfield, where Liverpool will play hosts to Atletico Madrid.

Liverpool have been on a roll at the onset of 2021/22, with the Reds yet to lose a game across all competitions this term. In the UEFA Champions League, Jurgen Klopp & co. have been largely imperious. However, they were made to work hard before beating Atletico Madrid 3-2 to extend their perfect start to their European campaign, thereby opening up a five-point gap at the top of Group B.

On the other hand, Atletico Madrid have been typically unspectacular across competitions so far this season. In La Liga, Los Rojiblancos are currently lagging behind Real Sociedad, Real Madrid, and Sevilla. Meanwhile, in Europe, they have managed just four points from their opening three games, scoring four goals while letting in as many strikes, meaning they require a major turnaround to topple Liverpool as Group B leaders.

The reverse fixture, played at the Wanda Metropolitano last month, was a pulsating affair that saw Liverpool eke out a narrow 3-2 win over Atletico Madrid. Ahead of the latest meeting between the two sides, The Hard Tackle takes a closer look at the encounter.

Join Jürgen Klopp and captain @JHenderson LIVE as they look ahead to Wednesday’s home #UCL meeting with @Atleti 🎙️ https://t.co/P6Q0rNwDkQ

Jurgen Klopp has been handed a major boost on the team news front ahead of the visit of Atletico Madrid. On Wednesday, the Liverpool manager will be bereft of the services of just three first-team players.

The good news comes in the form of the returns of Fabinho and Thiago Alcantara, who have been cleared to feature for Liverpool after overcoming their respective fitness issues. However, Klopp does have a fresh injury concern, with Naby Keita ruled out with a hamstring complaint, joining James Milner (hamstring) and Harvey Elliott (ankle) on the sidelines.

Klopp is highly unlikely to reinstate either of Fabinho and Thiago into the starting lineup, with Alex Oxlade-Chamberlain instead expected to be handed a rare start. The Englishman will line up alongside Curtis Jones and captain Jordan Henderson in the three-man unit  in the middle of the park.

As for the attacking unit, Roberto Firmino could drop down to the bench after an underwhelming display last time out against Brighton & Hove Albion. So, Diogo Jota could earn a much-awaited recall to the starting lineup, with Mohamed Salah and Sadio Mane continuing as the two wide attackers.

Only one other change is expected as far as the rest of the starting lineup is concerned, with Joel Matip expected to come into the side to partner Virgil van Dijk at the heart of the Liverpool defence. Trent Alexander-Arnold and Andrew Robertson are certainties as the two full-backs, while in goal, there is no looking past Alisson Becker. 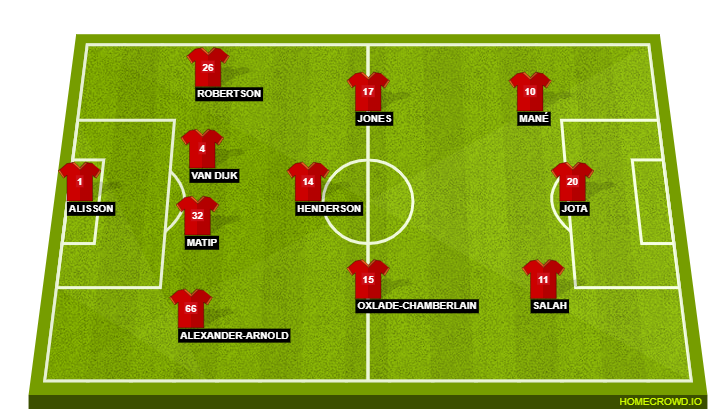 Unlike his counterpart in the Liverpool dugout, Diego Simeone has a few fresh roster issues to deal with ahead of the trip to Anfield. On Wednesday, the Atletico Madrid manager will have to make do without as many as five first-team players.

The major absentees are Antoine Griezmann and Stefan Savic, who will be serving their respective suspensions against Liverpool. In addition, Geoffrey Kondogbia (concussion), Thomas Lemar (hamstring) and Marcos Llorente (muscle injury) remain on the sidelines.

The absence of Savic and Kondogbia means Jose Maria Gimenez, Mario Hermoso and Felipe pretty much pick themselves in the three-man central defensive unit, which will provide cover to Jan Oblak in the Atletico Madrid goal.

Up ahead in midfield, the onus will be on Koke to keep things tight in the middle of the park, with Rodrigo De Paul being his partner. The Argentine will provide the creative impetus from the midfield, and so will the two wing-backs, Kieran Trippier and Yannick Carrasco.

Finally, in attack, the absence of Griezmann means Angel Correa is almost a certainty to partner Joao Felix and Luis Suarez. Former Liverpool striker Suarez will lead the line for Atletico Madrid, with support coming from Felix and Correa, who will look to overload the Liverpool box at every given opportunity. 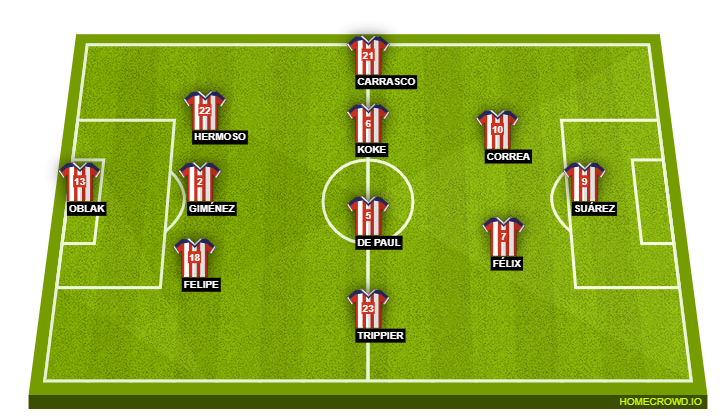 While the spotlight will once again invariably be on Mohamed Salah, one player whose output will go a long way in determining the contest’s outcome is Luis Suarez. The Uruguayan hitman has carved out his place as one of the greatest strikers of his generation.

However, if there is one major shortcoming in his career, it is the fact that the former Liverpool ace has uncharacteristically been well off his best in away games in the UEFA Champions League. Suarez, though, has scored in Atletico Madrid’s only away match in the competition so far this term, which would fill him in with some confidence on his return to Anfield. A big game for a big player.

Wednesday’s clash could be a repeat of the reverse fixture to a great extent, especially with Atletico Madrid likely to be desperate in search of goals to claw their way back into contention to top the Group B standings. Such an outlook could well play into the hands of Liverpool.

Having said that, the Reds have shown the tendency to concede cheap goals, which is something Atletico Madrid will hope to pounce on. However, in the end, the Reds should hold on to a slender advantage to eke out a one-goal win, just as they did last month, with Mohamed Salah likely to be back on the scoresheet.