Liverpool will be hoping to keep the pressure on Premier League leaders Chelsea when they face Brighton & Hove Albion at Anfield on Saturday.

The action continues to greet us daily in Europe, and on Saturday, Gameweek 10 of the 2021/22 Premier League season will get underway. The action kicks off with an intriguing battle between Leicester City and Arsenal at the King Power Stadium before the big hitters take centre stage. Among those will be Liverpool as they play hosts to Brighton & Hove Albion at Anfield.

Liverpool are the most in-form team in Europe at the moment, even if it does not necessarily reflect in their standing in the Premier League. The Reds are the only unbeaten team across competitions in England and are scoring goals for fun at the moment. In the English top-flight, Jurgen Klopp & co. are the highest scorers so far, with their most recent win coming in the form of a 5-0 rout of Manchester United.

On the other hand, Brighton & Hove Albion continue to make swift progress under the tutelage of Graham Potter. More importantly, the profligacies in the final third seem to be a thing of the past, and a strong start to the 2021/22 season has left them fifth on the table. However, the Seagulls seem to have gone off the boil lately, failing to win their last four Premier League games.

Last season’s corresponding fixture was one to forget for Liverpool, as Brighton handed them a shock 1-0 defeat, courtesy of Steven Alzate’s 56th minute goal. Ahead of the latest meeting between the two sides, The Hard Tackle takes a closer look at the encounter.

Time to hear from the boss ahead of #LIVBHA 🎙️

Join Jürgen Klopp LIVE for the latest team news and more ahead of tomorrow’s @PremierLeague meeting at Anfield: https://t.co/ze6y1aCpar

Jurgen Klopp has been handed a major boost on the team news front ahead of the visit of Brighton & Hove Albion. On Saturday, the Liverpool manager will have to make do without just four first-team players.

Unfortunately for Klopp, each of the four unavailable players is a midfielder, with Fabinho (knee), James Milner (hamstring), Thiago Alcantara (calf) and Harvey Elliott (ankle) all on the sidelines. So, the Liverpool boss is stretched for options in the middle of the park.

However, Klopp has been given a respite in the form of Naby Keita, who is available after recovering from the knock he sustained following a heavy challenge from Paul Pogba last weekend. With the Reds shortchanged for options in midfield, Keita ought to return to the starting lineup, with Curtis Jones and Jordan Henderson set to be his partners in the middle.

The key decision for Klopp will once again be the omission of one of the four first-choice attacking players. And against Brighton, Diogo Jota could miss out, with Sadio Mane returning to the left flank. Roberto Firmino will reprise his usual false nine role while on the right-wing there is no looking past the most in-form player in the game right now, Mohamed Salah.

At the heart of the Liverpool defence, Ibrahima Konate and Virgil van Dijk ought to pair up, with Joel Matip likely to be eased back in as a regular after recovering from his latest injury. Out wide, Trent Alexander-Arnold and Andrew Robertson are automatic picks as the full-backs. In goal, Alisson Becker selects himself despite Adrian’s heroics between the sticks against Preston North End. 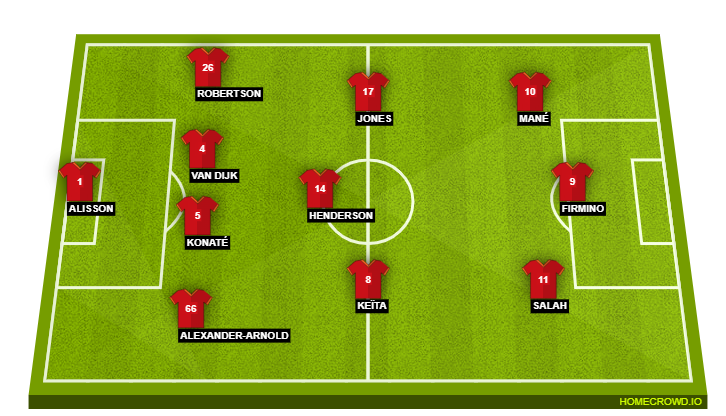 Unlike his counterpart in the Liverpool dugout, Graham Potter has a new injury concern to contend with ahead of the trip to Anfield. On Saturday, the Brighton & Hove Albion manager will be bereft of the services of at least three first-team players.

Dan Burn is the latest player to be sidelined after sustaining a knee injury in the Carabao Cup tie against Leicester City earlier this week. In addition, Steven Alzate (ankle) and Danny Welbeck (hamstring) remain unavailable. Meanwhile, Taylor Richards is a doubt due to his ongoing recovery from a back injury.

Welbeck’s absence means Brighton are likely to adopt a 3-5-2 setup instead of the 3-4-3 formation, with Neal Maupay and Leandro Trossard forming a dynamic strike partnership. The creative onus will fall on the shoulders of the two wing-backs, with Tariq Lamptey and Marc Cucurella likely to make many a marauding run on Saturday.

In the middle of the park, the impetus will be on former Liverpool midfielder Adam Lallana to keep things tight and track the runs of Naby Keita, in particular. Pascal Gross and Jakub Moder will provide defensive support to Lallana, with the duo also bringing the forward thrust from the midfield.

At the back, Lewis Dunk, Shane Duffy and Adam Webster will form the three-man central defensive unit, with the trio likely to remain compact in the defensive phases of the game. Finally, in goal, there is no looking past Robert Sanchez, who ought to be a busy man between the sticks against Liverpool. 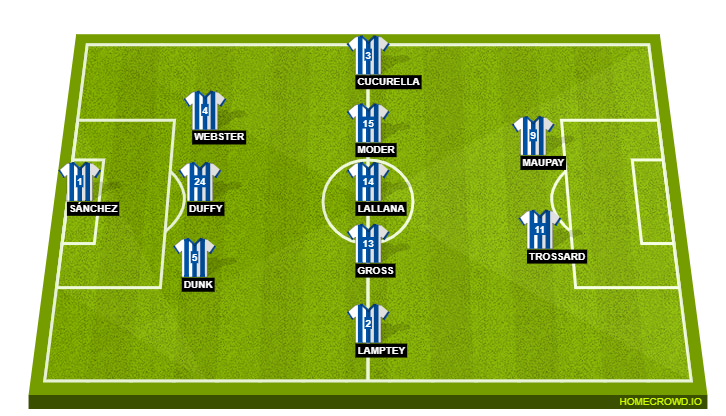 The talk of the town around the world seems to be just one player at the moment – Mohamed Salah. However, while the world goes gaga over Salah, one player has been quietly doing his job smartly, for the most part, this season bar the odd underwhelming performance. We are, of course, talking about Sadio Mane.

Having admitted that 2020/21 was a season to forget for him, Mane has been looking to make amends early in the new campaign, and he has done just that so far. However, with competition for the attacking places being as fierce as it is, Mane will hope to show that he deserves to be starting every single Premier League game, just as Salah does. A big match for the Senegalese ace.

Brighton & Hove Albion have been one of the more impressive teams in the Premier League this season; there are no two ways about it. However, the fixtures are starting to take a turn for the worse for the Seagulls and the frustrating draws with Norwich City, Arsenal and Crystal Palace are starting to show their effects now. That is because after facing Manchester City last week, things do not get any easy for Graham Potter’s men.

Liverpool are indeed the most fearsome team in England, if not the continent. The Reds – and a certain Mohamed Salah, in particular – are scoring for fun right now, having netted five goals in each of their last two games. In the build-up to the game, Potter has lavished praise on Salah as well, claiming he is “out-of-this-world class” right now.

Salah will invariably be the danger man on Saturday, and the Egyptian wizard will end up being the undoing for Brighton at Anfield, with another goal glut coming from him and his attacking partners. However, Liverpool should stop just short of five this time around, beating Brighton 3-0 to keep the pressure on another in-form team in Chelsea, who face Newcastle United on Saturday.