Real Madrid will be hoping to reclaim the summit of La Liga when they take on Elche at Estadio Manuel Martinez Valero on Saturday.

The action continues to come thick and fast in Spain, with Matchday 12 of the 2021/22 La Liga season set to kick off less than 48 hours after the end of the last round of fixtures. The action begins at Estadio Manuel Martinez Valero, where Elche will be playing hosts to Real Madrid on Saturday afternoon.

Elche only just retained their La Liga status last season, finishing two points clear of 18th-placed SD Huesca. The early signs in 2021/22 point towards another difficult season for the Valencian club. So far this term, Fran Escrib & co. have managed to win just two of their first 11 games, losing five while drawing the remaining four to sit 15th in the standings.

On the other hand, Real Madrid have established their credentials as title contenders, even though they have not been in full flow so far. Curiously,  Los Blancos have won just one of their last four La Liga games, although that sole victory came against bitter rivals Barcelona in the first  El Clasico of the season last weekend.

Last season, the corresponding fixture saw Elche come from a goal down to hold Real Madrid to a 1-1 draw, with Fidel Chaves scoring the equalizer from the spot after Luka Modric had broken the deadlock in the first half. Ahead of the latest meeting between the two sides, The Hard Tackle takes a closer look at the encounter.

Fran Escrib does not have many pressing injury concerns to deal with ahead of the visit of Real Madrid. On Saturday, the Elche manager will only have to make do without one first-team player, with Pablo Piatti expected to miss out again. Otherwise, the hosts are at full strength and should line up with their strongest possible side.

Elche have usually been set up in some form of a 4-4-2 formation, which should be the system in place against Real Madrid as well. Kiko Casilla will take his place in goal, and in front of him, the key men in the defensive line will be the center-backs Pedro Bigas and Gonzalo Verdu. Out wide, Antonio Barragan and Johan Mojica will be the two full-backs.

Up ahead in midfield, the onus will be on Raul Guti and former Real Madrid midfielder Omar Mascarell to keep things tight and stifle Toni Kroos in his bid to create the openings for the visitors’ attackers. Josan and Fidel will be the two wide midfielders for Elche, with the duo providing the forward thrust from the middle of the park.

In addition, Josan and Fidel will also be tasked with remaining compact in the second line of press. Finally, the strike partnership will likely feature Lucas Boye and Dario Benedetto, with Lucas Perez being an impact substitute off the bench. 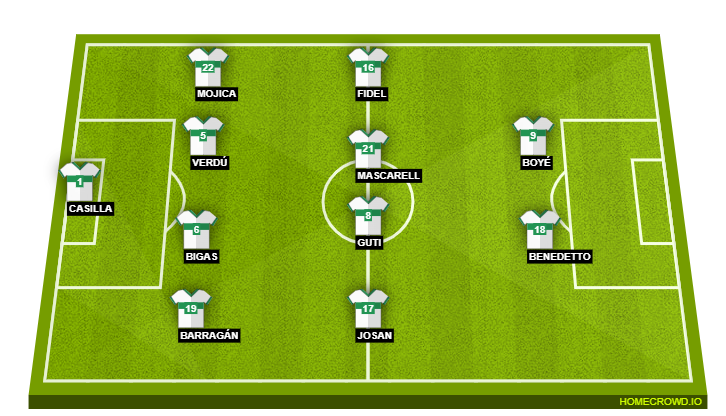 His counterpart in the Elche dugout, Carlo Ancelotti has any a new roster issue hampering unlike his preparations for the trip to Estadio Manuel Martinez Valero. On Saturday, the Real Madrid boss will only be bereft of the services of three first-team players.

The major absentee for Real Madrid is Karim Benzema, who is struggling with a foot issue. In addition, Federico Valverde continues to be sidelined with a knee injury. Apart from the Uruguayan international, fellow midfielder Dani Ceballos also ought to miss out as he continues to deal with the effects of the ankle injury he sustained at the Tokyo 2020 Olympics.

In the absence of Valverde, Ancelotti’s midfield options are reduced significantly. And with one eye on next week’s UEFA Champions League group stage tie against Shakhtar Donetsk, Luka Modric could be on the bench again, with Eduardo Camavinga partnering Casemiro and Toni Kroos in the middle of the park.

The rest of the side will not see too many changes. Lucas Vazquez is expected to come in for Dani Carvajal, as Ancelotti continues to ease the Spaniard back in following his return from a long layoff. The other big changes in the side will come in attack, Rodrygo Goes coming in for Marco Asensio following an underwhelming display last time against Osasuna , while Luka Jovic will hope to fill Benzema’s huge void.

Rodrygo and Jovic ought to provide company to the in-form Vinicius Junior, who will have it all to do in Benzema’s absence. At the back, Eder Militao and David Alaba should form the central defensive partnership, with Ferland Mendy taking his place on the left flank again. Finally, in goal, there is no looking past Thibaut Courtois. 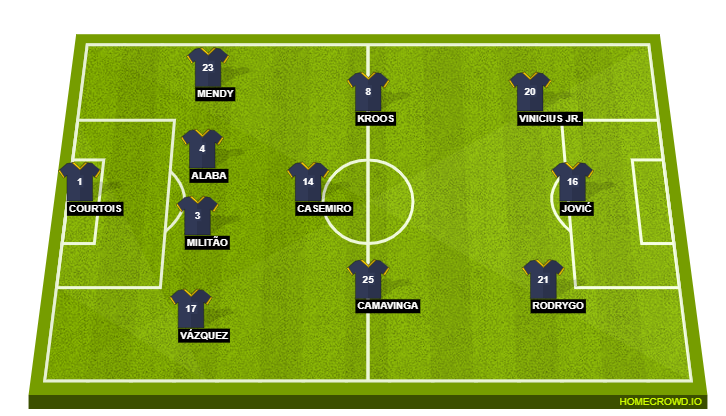 Real Madrid boast of two of the most in-form players in world football at the moment in the form of Karim Benzema and Vinicius Jr. However, the Merengues have, in turn, been incredibly dependent on the two flourishing attackers. That tends to hand a game plan to their opponents as they can  crowd out the two forwards and breathe easily for the most part.

Now that Benzema is ruled out of the game against Elche, Rodrygo Goes comes into the picture as a key player. The Brazilian has been regarded as a promising quantity for a couple of years now. And with Eden Hazard and Marco Asensio failing to make their mark, the onus is on Rodrygo to chip in with valuable contributions to take some of the burden off compatriot Vinicius on Saturday.

Elche have not been too porous at the back, meaning the game on Saturday might not be as straightforward as Real Madrid would like. Nevertheless, with Karim Benzema and Vinicius Jr. being kept quiet by Osasuna earlier this week, a response can be expected from the visitors.

Now, with Benzema unavailable, Luka Jovic will hope to prove a point on Saturday. It all points to a hard-fought win that will take Real Madrid to the top of the table, even if temporarily so. With that in mind, The Hard Tackle predicts a 1-0 victory for Carlo Ancelotti & co. at the end of what will be a frustrating game in the absence of Benzema.