Bayern Munich will be aiming to retain their place atop the Bundesliga table when they welcome Hoffenheim to the Allianz Arena on Saturday.

The 2021/22 season continues into the weekend, and in the Bundesliga, Matchday 9 kicks off on Friday with Mainz facing off against Augsburg. The action on Saturday begins with four matches that will be played simultaneously, and one of the games on show will be played at the Allianz Arena, where Bayern Munich will play hosts to Hoffenheim.

Bayern Munich have made a fairly strong start to the season, with the only real blip coming against Eintracht Frankfurt ahead of the international break, with Die Adler handing them a shock 2-1 loss. However, Julian Nagelsmann have done well to ensure that the aforementioned defeat has quickly been forgotten, as a 5-1 win over Bayer Leverkusen has been followed up a 4-0 victory against FC Basel in the UEFA Champions League this week.

Hoffenheim, on the other hand, have recovered from a slow start to the 2021/22 season. Die Kraichgauer had been languishing in lower mid-table ahead of their final game before the most recent international break. However, two wins in their last three games have helped Sebastian Hoeness & co. climb up to 9th on the Bundesliga table.

The corresponding fixture last season saw Bayern Munich cruise to a 4-1 win over Hoffenheim, with Jerome Boateng, Thomas Muller, Robert Lewandowski and Serge Gnabry all on target while Andrej Kramaric netted for the visitors. Ahead of the latest meeting between the two sides, The Hard Tackle takes a closer look at the encounter.

🗣️ @J__Nagelsmann on the squad: "Leon and Alphonso are not 100 percent fit yet, they won't be available tomorrow. For these two, we're looking at the #DFBPokal game against Gladbach." #MiaSanMia #FCBTSG pic.twitter.com/RbUv2zaRku

Julian Nagelsmann does not have any fresh injury concerns hampering his preparations ahead of the visit of Hoffenheim. On Saturday, the Bayern Munich manager will be bereft of the services of three first-team players.

Sven Ulreich is still out on the sidelines due to a knee injury, although his absence is of no concern, with Manuel Neuer fit and available. In addition, Alphonso Davies (thigh) and Leon Goretzka (illness) are also unavailable for a second successive game, with Nagelsmann confirming that they are only likely to return in the next game that Bayern Munich play.

Manuel Neuer will take his customary place in goal for Bayern Munich, who will line up in a 4-2-3-1 formation against Hoffenheim. In Davies’s continued absence, Lucas Hernandez will feature as the left-back while on the opposite flank, Benjamin Pavard is a certainty. At the heart of the Bayern Munich defence, Dayot Upamecano and Niklas Sule pick themselves.

Up ahead in midfield, Marcel Sabitzer is a certainty in the absence of Goretzka, with Joshua Kimmich being his midfield partner in the double pivot. The former RB Leipzig captain will provide the forward thrust from midfield while Kimmich will be the key part of Bayern’s engine room.

As for the attacking unit, Robert Lewandowski will lead the line for Bayern Munich against Hoffenheim, with Thomas Muller playing off of him and pulling the strings higher up the pitch. Out wide, there is no looking past Serge Gnarby and the in-form Leroy Sane. 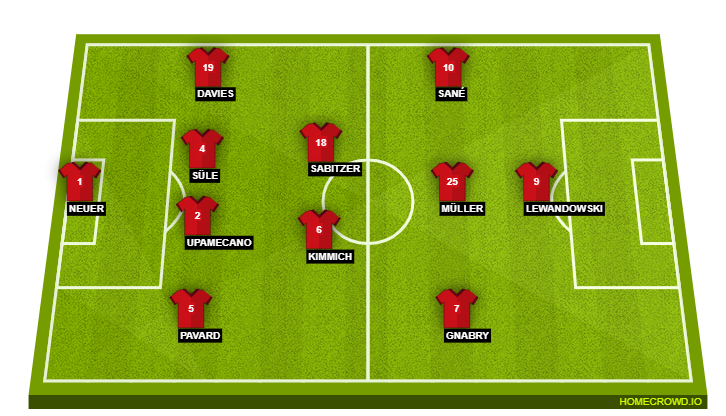 Unlike his counterpart in the Bayern Munich dugout, Sebastian Hoeness has a few fresh roster issues to contend with ahead of the trip to the Allianz Arena. On Saturday, the Hoffenheim boss will have to make do without five first-team players.

The latest players to be sidelined are Pavel Kaderabek and Christoph Baumgartner. While Kaderabek sustained an ankle injury in the 5-0 win over 1.FC Koln last weekend against, Baumgartner misses out after testing positive for COVID-19. The remaining absentees for Hoffenheim are Ermin Bicakcic (knee), Benjamin Hubner (back) and Marco John (shoulder).

Oliver Baumann is the automatic pick in goal for Hoffenheim, who will be taking a shape of 3-4-1-2 against Bayern Munich despite the fresh roster issues that Hoeness has to deal with. Indeed, in front of Baumann, there will be quite a few forced changes.

Baumgartner’s absence will force Hoeness to move Dennis Geiger up into the advanced midfield role, with the 23-year-old reprising the no. 10 role behind the two strikers, Ihlas Bebou and Andrej Kramaric. Geiger’s vacant spot in midfield, meanwhile, will fall upon Florian Grillitsch, whose own vacated position will fall upon Kevin Vogt.

Vogt will, therefore, form the three-man central defensive unit alongside Stefan Posch and former Bayern Munich defender Chris Richards, with Kevin Akpoguma moving into the right wing-back slot in the absence of Kaderabek. David Raum will be the left wing-back while Diadie Samassekou will pair up with Grillitsch in the middle of the park. 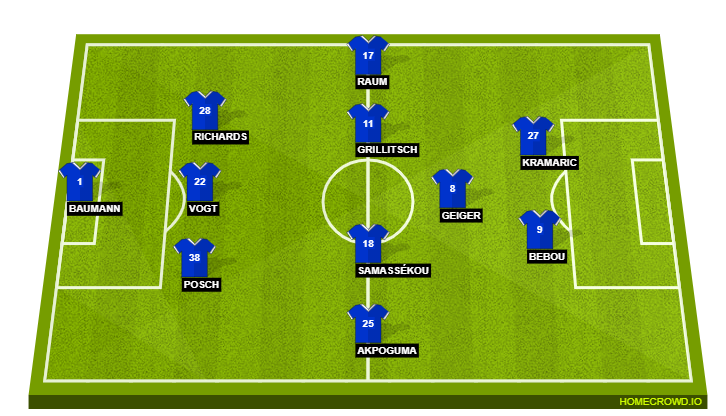 It is fair to say that Leroy Sane’s maiden campaign with Bayern Munich did not quite go to plan. The German international just could not manage to settle in quickly, still showing some effects of the long-term injury that had plagued him in his final season with Manchester City. But, he has put all the misery of his debut season with Bayern Munich behind him to start the 2021/22 campaign in strong fashion.

In fact, Sane has been so impressive in the past month or so that he has usurped stalwarts like Robert Lewandowski and Joshua Kimmich to be named Bayern’s Player of the Month for September. Now is the time for the 25-year-old to continue his upward trajectory, with the litmus test of his consistency beginning in the key period ahead of the winter break.

Julian Nagelsmann might not be taking charge of Bayern Munich from the sidelines against Hoffenheim this weekend after testing positive for COVID-19. However, the hosts will still be too formidable a team for the visitors to topple, despite some promising recent head-to-head results for them.

Robert Lewandowski and Leroy Sane should be the players impressing again, although Hoffenheim will carry some threat on the break. Bayern Munich, though, should hold on for a clean sheet as well as a 3-0 win, which will be the 300th Bundesliga victory for Manuel Neuer.