Tottenham Hotspur will aim to remain perched atop Group G of the UEFA Europa Conference League when they take on Vitesse Arnhem on Thursday.

The group stage action in European competition reaches its halfway point on Thursday, with Matchday 3 being completed in the Europa League as well as the Europa Conference League. Tottenham Hotspur will be in action on the day, as they make the short trip to the Gelredome to face Vitesse Arnhem on Thursday.

Tottenham made a slow start to their UEFA Europa Conference League campaign after having had to take the qualification route to the competition. Spurs started off with a 2-2 draw with Rennes before coasting to a 5-1 win over NS Mura. Their form has steadily been improving back home as well, having beaten Aston Villa and Newcastle United by the odd goal in successive games.

Vitesse Arnhem, on the other hand, have been hit and miss so far this season, which has been the case in Europe as well. The Dutch outfit started off with a 2-0 win over Mura before going down 2-1 to Rennes on Matchday 2. As far as their campaign in the Eredivisie is concerned, Thomas Letsch’s charges are currently sixth, although they are only a point adrift of third-placed FC Utrecht.

Thursday’s encounter will be the maiden match-up wherein Vitesse Arnhem and Tottenham will face off against each other and ahead of their first-ever meeting, The Hard Tackle takes a closer look at the encounter.

Thomas Letsch does not have many roster issues hampering his preparations ahead of the visit of Tottenham Hotspur. On Thursday, the Vitesse Arnhem manager will only have to make do without one first-team player, with Daan Rieziger sidelined with a shoulder injury.

However, Oussama Tannane is back at Letsch’s disposal after being suspended in the Eredivisie game on the weekend. The 27-year-old ought to be recalled to the starting lineup and will likely provide the creative impetus from the middle of the park for Vitesse.

The hosts should be lined up in their usual 3-4-3 setup against Tottenham, with Markus Schubert set to take his place in goal. In front of the German goalkeeper, the three-man central defensive unit ought to be formed by Riechedly Bazoer, Jacob Rasmussen and captain Danilho Doekhi.

The three centre-backs will look to remain compact off the ball, seeing as they will receive support from the wing-backs, who will drop back to create a back five. Speaking of, Maximilian Wittek and Eli Dasa will continue as the wing-backs, with the duo providing the width in the final third as well.

Up ahead in midfield, Sondre Tronstad will line up alongside Tannane, with the Norwegian looking to keep things tight in the middle of the park. Finally, Lois Openda will likely lead the line for Vitesse against Tottenham, with Nikolai Baden Fredericksen and Oussama Darfalou. 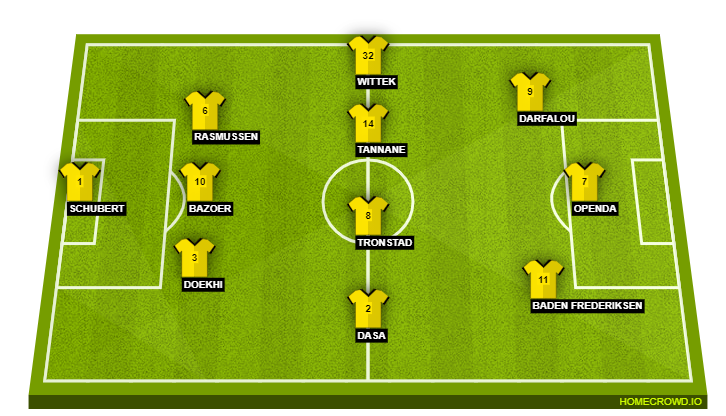 Like his counterpart in the Vitesse Arnhem dugout, Nuno Espirito Santo is not bogged down by any pressing injury concern ahead of the trip to the Gelredome. On Thursday, the Tottenham Hotspur boss will only have to make do without two first-team players, with neither being a regular.

Matt Doherty, who has largely been relegated to performances in Europe, is likely to miss out with a knock while Ryan Sessegnon is recovering from a hamstring injury. In the former’s absence, Japhet Tanganga is expected to line up as the right-back for Tottenham, who will take up the shape of a 4-2-3-1.

On the left flank, Ben Davies ought to come into the side to make a rare start while at the heart of the Tottenham defence, Davinson Sanchez is expected to pair up with Joe Rodon. In goal, there is no looking past Pierluigi Gollini, who has made some impression already for Spurs.

Up ahead in midfield, Harry Winks will be handed a rare chance to impress, with the out of favour midfielder pairing up with Giovani Lo Celso in the double pivot. The duo will largely keep things tight in the middle of the park while aiming to recycle possession smartly.

The creative thrust, though, will be provided by Bryan Gil and Steven Bergwijn, with Dele Alli being the third man in the attacking line behind the central striker, who ought to be Dane Scarlett, as he continues to claw his way back to top form.

Dele Alli’s fall from grace has continued this season and after a reasonably solid start to the 2021/22 campaign, the English international is once again on the periphery. With Tanguy Ndombele impressing of late, chances have come few and far between for Alli, who has to suffice with starts in the UEFA Europa Conference League.

Alli, though, will need to take these opportunities with both hands if he is rediscover his place in the side and once again become a key figure for Tottenham. The 25-year-old did impress last time out against NS Mura and will once again need to deliver the goods, which will ultimately bode well for Tottenham as well.

Vitesse Arnhem will surely give Tottenham a run for their money and with Spurs looking somewhat wobbly on their travels this season, one can expect a closely-contested encounter. However, their overall improving form could be a factor in a big win for Tottenham, with late goals expected to take the tie away from the hosts. The Hard Tackle predicts a 3-1 win for Nuno Espirito Santo & co.