The top spot in the UEFA Champions League Group B will be up for grabs when Atletico Madrid welcome Liverpool to the Wanda Metropolitano on Tuesday.

The UEFA Champions League resumes this week with Matchday 3 of the group stage kicking off on Tuesday. And the most eye-catching fixture on the day will be played at the Wanda Metropolitano, where Atletico Madrid will play hosts to Liverpool.

Atletico Madrid have made a slightly slow start to their Champions League campaign, having been held to a draw by FC Porto in their opening fixture before leaving it late to beat AC Milan 2-1 last time out. In La Liga, Los Rojiblancos have not been in full flow but remain among the top teams so far this term, although they did not play this past weekend after having their fixture postponed.

Liverpool, on the other hand, have been imperious in the Champions League to date, winning each of their two opening fixtures. The Reds, in fact, remain the only unbeaten English team across all competitions and maintained such a start to 2021/22 this past weekend, cruising to a 5-0 win over Watford in the Premier League.

Atletico Madrid have happy memories of their last meetings with Liverpool, as they grabbed an aggregate 4-2 win in the Round of 16, back in the 2019/20 season. Ahead of the latest meeting between the two sides, The Hard Tackle takes a closer look at the encounter.

Diego Simeone barely has any fitness issues hampering his preparations ahead of the visit of Liverpool. On Tuesday, the Atletico Madrid manager will only be bereft of the services of one first-team player, with Mateus Cunha missing out with a thigh injury.

With none of his regulars unavailable, Simeone will field his strongest possible starting lineup, with Jan Oblak taking his customary place in goal. In front of him, Atletico Madrid will line up in a 3-5-2 formation, with the three-man central defensive setup being formed by Stefan Savic, Jose Maria Gimenez and Mario Hermoso.

Up ahead in midfield, Koke will have the onus on him to stifle Roberto Firmino, who will often drop deep to clear out space for Mohamed Salah and Sadio Mane. Rodrigo De Paul will be the creator-in-chief for Atletico Madrid while also putting in the hard yards off it. Thomas Lemar will be the third man in midfield, often charging forward to support the two strikers.

Speaking of, Antoine Griezmann and Luis Suarez will form the strike partnership, with the former playing off of the ex-Liverpool striker. Providing the supplies for the two Atletico Madrid front-men will be Kieran Trippier and Yannick Carrasco, who will be in-charge of providing the width for the hosts. 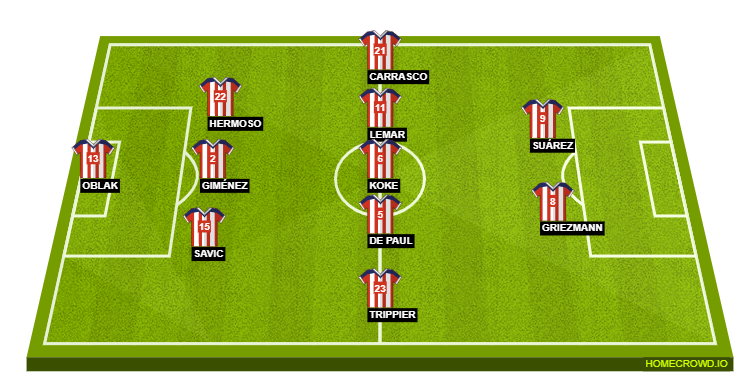 Unlike his counterpart in the Atletico Madrid dugout, Jurgen Klopp has plenty of players on the sidelines, with midfield, in particular being put under pressure. That is because Thiago Alcantara (calf), Curtis Jones (groin) and Harvey Elliott (ankle) are on the sidelines, leaving the Liverpool boss a little short of options.

However, with Fabinho once again at Klopp’s disposal, a strong three-man unit comprising of the Brazilian, Jordan Henderson and the in-form Naby Keita will line up in the middle of the park for Liverpool. The returning Fabinho will provide the requisite solidity in the midfield to shield against the guile of someone like Rodrigo De Paul.

At the back, there are unlikely to be any changes made, especially considering both Andrew Robertson and Trent Alexander-Arnold were taken off early in the second half against Watford. The duo should once again be the two full-backs, providing the bulk of the creativity for the Reds. At the heart of the Liverpool defence, there is no looking Joel Matip and Virgil van Dijk.

Finally, the attacking unit might not be shuffled either, seeing as Roberto Firmino played one of the best games of his Liverpool career against Watford, netting a fine hat-trick. Surrounding the Brazilian will be Mohamed Salah and Sadio Mane, both of whom have been in good touch this term. 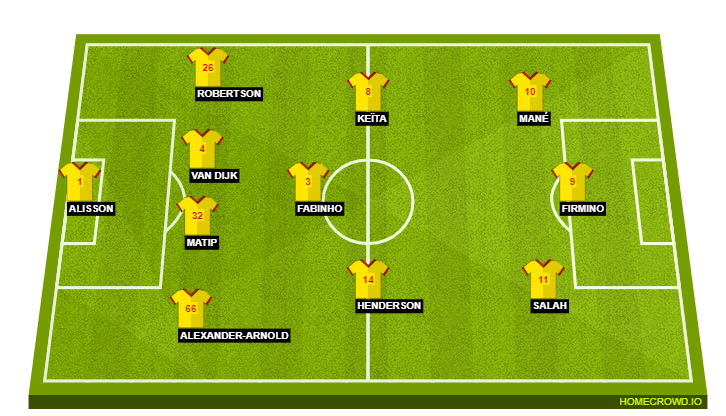 Mohamed Salah is perhaps the best player in the world right now while Sadio Mane is very bullish about the form he is displaying at the moment. Roberto Firmino will be riding a wave of confidence as well after scoring a hat-trick against Watford. However, it is a former Liverpool player who is the Player to Watch this time around.

This is a game that might not have too many goals in it, as is usually the case in a game that Atletico Madrid play. However, with Mohamed Salah in such a rollicking form as he is in right now, it is likely that Liverpool will find a way to breach a usually impregnable Atletico Madrid defence more than once.

Having said that, the Reds have appeared to be wobbly at the back at times in the early stages of the season. When Atletico Madrid do get a big chance, one could expect Luis Suarez to be at the end of the opening. However, at the end of the day, Liverpool should get some measure of revenge for their defeat to Los Rojiblancos last time out in 2019/20, grabbing a 2-1 victory on Tuesday.