Everton and West Ham United will both be keen on returning to winning ways when they face off at Goodison Park on Sunday.

Gameweek 8 of the 2021/22 Premier League season continues on Sunday, with just two games on show on the day. The action starts at Goodison Park, where Everton will play hosts to West Ham United, in a game wherein both the teams will be keen on grabbing all three points.

Everton have made a bright start to life under Rafael Benitez despite initial resistance from the fans due to his history with Liverpool. However, the Spanish manager has slowly been winning over the fans, especially with the Toffees playing a resilient brand of football, which has earned them a 1-1 draw with Manchester United most recently.

West Ham United, on the other hand, have continued pretty much from where they left off in the 2020/21 season, despite the added burden of UEFA Europa League football. Granted the Hammers have lost twice in their first seven Premier League games, but they have looked imperious in Europe while still producing impressive results against Leeds United and Leicester City.

The corresponding fixture last season saw West Ham eke out a narrow 1-0 win over Everton, with Tomas Soucek scoring the late winner. Ahead of the latest meeting between the two sides, The Hard Tackle takes a closer look at the encounter.

🤕 | "Richarlison and Calvert-Lewin are closer, but they will not be available for this game."

Rafael Benitez has largely greeted a raft of positive news at the end of the international break, with the potential absence of Yerry Mina being the only setback. On Sunday, the Everton manager will be bereft of the services of up to five players.

As iterated, Mina could miss out after returning late from international duty with Colombia. As has been the case with every other South American player in action during the break, the 27-year-old could miss out as well. In addition, Fabian Delph (shoulder), Andre Gomes (calf), Richarlison (knee) and Dominic Calvert-Lewin (toe) remain unavailable.

However, both Richarlison and Calvert-Lewin have made significant progress on their respective recovery trails in the international break and will be available for selection next weekend. In addition, Seamus Coleman is set to return as well after recovering from a hamstring injury.

Meanwhile, in Mina’s absence, Ben Godfrey should pair up with Michael Keane at the heart of the Everton defence, with Lucas Digne – passed fit despite sustaining a knock while on France duty – taking his customary place on the left flank. In goal, there is no looking past Jordan Pickford.

Up ahead in midfield, Abdoulaye Doucoure and Allan pick themselves, with Demarai Gray set to reprise the no. 10 role again. As for the attacking unit, Anthony Gordon and Salomon Rondon will continue to fill in for Richarlison and Calvert-Lewin, with Andros Townsend being the key man in the final third. 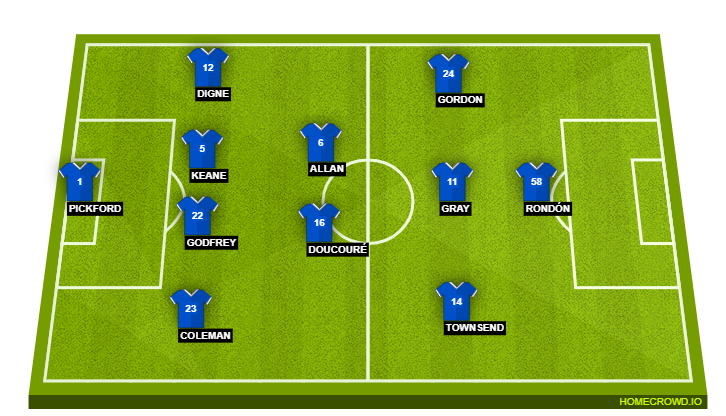 Unlike his counterpart in the Everton dugout, David Moyes barely has any injury concern to deal with ahead of the trip to Goodison Park. On Sunday, the West Ham United manager is only likely to have to make do without one first-team player in Ryan Fredericks, who is recovering from a groin issue.

However, Moyes has been sweating over the fitness of Vladimir Coufal, who is recovering from a minor groin injury of his own. The Czech full-back, though, ought to be fit enough to start, with the rest being handed during the UEFA Europa League tie this coming week.

Aaron Cresswell will be the other full-back for West Ham and will hold the key with his deliveries from set-pieces as well as open play. Kurt Zouma and Angelo Ogbonna will form the central defensive partnership again while Lukasz Fabianski will be stationed between the sticks.

Up ahead in midfield, Declan Rice and Tomas Soucek will pair up in the double pivot, with the duo looking to keep a check on Andros Townsend and Demarai Gray while setting off the moves for West Ham. Said Benrahma is likely to reprise the no. 10 role instead of Pablo Fornals.

That means West Ham will adopt a more direct approach, overloading the central areas, with Fornals likely to move in and allow Cresswell space to overlap. Jarrod Bowen will provide the creative impetus from the right flank, with Michail Antonio leading the line for West Ham against Everton. 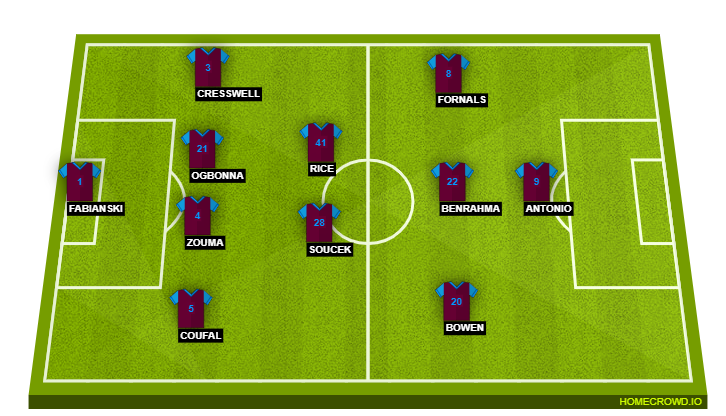 A change of scenery is doing Andros Townsend a world of good. After all, spells with Newcastle United and Crystal Palace had created a sense that his career had been stagnating, even though he did produce some moments of brilliance here and there.

The move to Everton, though, seems to have given Townsend a new lease of life, with Rafael Benitez bringing the best out of him. Up to five goals in all competitions for Everton, Townsend has matched his tally for Crystal Palace already, although he will now be eager to break his duck against West Ham United, having never scored versus the Hammers – his longest drought against any club.

Everton have made a name for being a typically stubborn Rafael Benitez team early in the 2021/22 season. And while they may have held Manchester United to a 1-1 draw, the absence of Richarlison and Dominic Calvert-Lewin could be felt against a physical West Ham United, despite the form of Andros Townsend and Demarai Gray.

Indeed, Townsend could be in with a chance to end his drought against West Ham. On the opposite end, a somewhat vulnerable Everton defence should have their holes exploited by Michail Antonio, who will be raring to make an impact after not joining Jamaica in the international break. With that in mind, The Hard Tackle predicts a 2-1 win for David Moyes & co. against his former side.