England will hope to take a step closer to securing qualification to FIFA World Cup 2022 when they welcome Hungary to Wembley on Tuesday.

The international break is drawing to a close for national teams across Europe, with just one more day of action remaining. One of the more eye-catching fixtures on Tuesday night will be played at Wembley, where England will be playing hosts to Hungary, aiming to continue their unbeaten start to their campaign in the FIFA World Cup 2022 Qualifiers.

England have been largely imperious in the FIFA World Cup Qualifiers, with their only blip being a 1-1 draw with Poland last month. The goal conceded in that game was only the second they have let in while scoring as many as 23 in seven outings so far, with the most match-up ending in a 5-0 trouncing of Andorra.

Hungary, on the other hand, are facing a race against time to clinch a playoff spot, with usurping England from the summit of Group I being out of question. The Magyars are currently fourth in the standings, five points behind second-placed Albania and four adrift of Poland. Their job has been made all the tougher this past week after being beaten 1-0 by Albania, making a win imperative for Tuesday.

The reverse fixture, played at the Ferenc Puskas Stadium last month, saw England cruise to a 4-0 win over Hungary thanks to a tremendous second half showing by the Three Lions. Ahead of the latest meeting between the two sides, The Hard Tackle takes a closer look at the encounter.

We're joined by @masonmount_10 and the boss to look ahead to tomorrow night's game against Hungary! 🎙 https://t.co/U5RooFk9O1

Gareth Southgate does not have any fresh roster issues hampering his preparations ahead of the visit of Hungary. At Wembley on Tuesday, Harry Maguire and Kalvin Phillips will remain the major absentees for England, with the duo missing through their respective calf injuries.

The absence of Maguire should mean Tyrone Mings will be handed a start, with the 28-year-old pairing up with John Stones at the heart of the England defence. Stones has indeed been received backing from Southgate recently, with the England head coach keeping his faith in him despite not playing for Manchester City.

Meanwhile, Southgate ought to revert to his first-choice starting lineup for the most part, with Jordan Henderson the obvious pick to replace Phillips in the midfield double pivot, where he ought to have Declan Rice for company. The duo will provide a solid base in front of the defensive line while also aiming to recycle possession smartly.

Speaking of the defensive line, Kyle Walker should be reinstated as the right-back, with Ben Chilwell keeping hold of his spot after an impressive performance last time out against Andorra. In goal, Jordan Pickford should replace Sam Johnstone.

Finally, the attacking unit is expected to feature talisman Raheem Sterling and captain Harry Kane, with Mason Mount pulling the strings from the no. 10 slot. The final spot in the attacking unit will likely be handed to Phil Foden, who ran the show against Andorra and has earned another start for England. 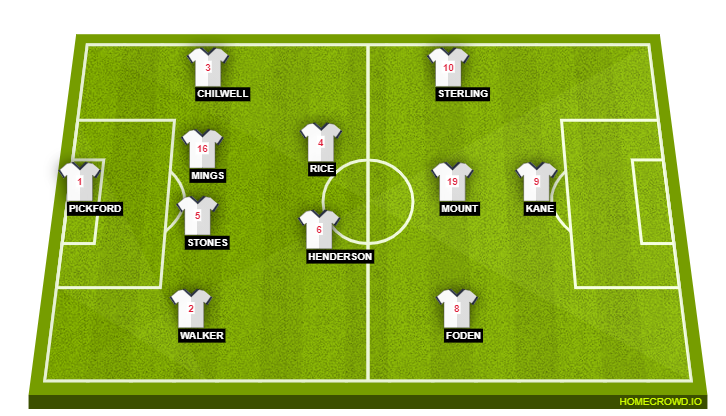 Unlike his counterpart in the England dugout, Marco Rossi has seen a couple of players becoming fresh absentees in the wake of their defeat to Albania last time out. On Tuesday, the Hungary boss will have to make do without Endre Botka and Attila Fiola.

While Fiola has sustained an injury that has forced him to withdraw his name from the squad while Botka is suspended due to an accumulation of yellow cards. In addition, captain Adam Szalai is also unavailable due to a knee injury, which has forced a change of formation to a 3-4-2-1.

In Adam Szalai’s absence, Roland Sallai will lead the line for Hungary against England. Playing off of the 24-year-old ought to be Szabolcs Schon and Dominik Szoboszlai, who will be the chief creator for the visitors on Tuesday.

In the middle of the park, the onus will be on Laszlo Kleinheisler and Adam Nagy to keep things tight and stifle England during their build-up play. Out wide, Zsolt Nagy and Loic Nego will be the two wing-backs, with the duo having the responsibility of providing width higher up the pitch. In addition, the two wing-backs will also need to drop back to create a back five to support the three centre-backs.

Speaking Adam Lang will likely be the man to replace Botka at the back, with Willi Orban and Attila Szalai lining up alongside him. Finally, there is no looking past Peter Gulacsi between the sticks, and the 31-year-old will be determined to put up a better performance than the only last month, when he was a liability in the Hungary goal. 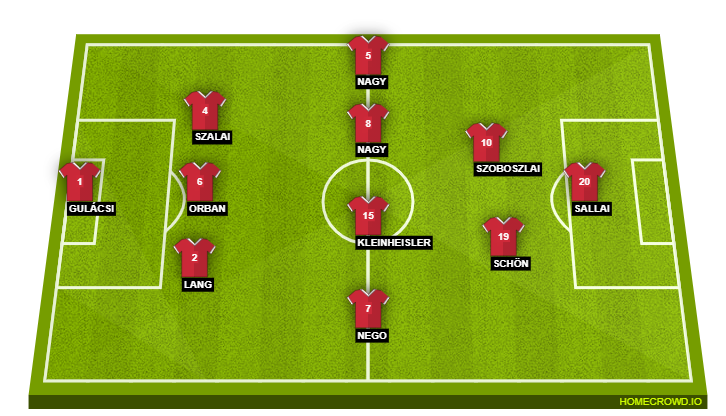 It is fair to say that the 2021/22 season has already been a turbulent in these early stages so far. After not getting his desired move to Manchester City, the England captain has failed to hit the heights of last term and has barely made his mark in most of the games he has featured in.

However, that is not the case when turning out for England, not nearly. In fact, Kane is nigh on unstoppable in front of goal in qualification fixtures (for World Cups or Euros), and he did continue his fine run in such settings last month as well. Kane will now be eager to get England a step closer to clinching an automatic berth at next year’s finals, and doing so might set the tone for improved performances at club level as well.

On their best day, Hungary can give the best of teams a run for their money, as witnessed at UEFA Euro 2020. However, Marco Rossi’s charges have gone off the boil since their ouster from this past summer’s big tournament and appear likely to end another World Cup qualifying campaign without reaching the finals.

England, on the other hand, continue to look imperious, proving that the draw with Poland was but an aberration. The Three Lions should once again make quick work of their opposition, cruising to a 3-0 win, with Harry Kane producing yet another big performance in a qualifier.