A third-placed finish in the UEFA Nations League will be on the line when Italy host Belgium at the Allianz Stadium on Sunday.

The second edition of the UEFA Nations League is at its climactic end, with the winner set to be crowned on Sunday. However, before the finale, there is a third place match to be contested, as Italy lock horns with Belgium at the Allianz Stadium on Sunday afternoon.

Italy have been coming off a memorable summer that saw them being crowned as the European champions at the end of an imperious run at UEFA Euro 2020. The Azzurri have indeed been on a resurgent run since the appointment of Roberto Mancini, losing just thrice in 43 games. However, unfortunately for Italy, the third defeat came in the UEFA Nations League semi-final against Spain earlier this week.

Belgium, on the other hand, continue to underwhelm despite boasting of some of the best players in the game at the moment. By the looks of it, it appears as if the golden generation might all just call it a day without winning an international trophy, with the disappointment of the Euros now being followed up by their ouster from the Nations League semi-final at the hands of France, who came from two goals down to win 3-2 in dramatic fashion.

Italy and Belgium most recently clashed in the quarter-finals of UEFA Euro 2020, with Roberto Mancini & co. eking out a narrow 2-1 win en route to their triumph two rounds later. Ahead of the latest meeting between the two sides, The Hard Tackle takes a closer look at the encounter.

Roberto Mancini does not have any fresh injury concerns hampering his preparations ahead of the UEFA Nations League third-place contest. So, Ciro Immobile, Rafael Toloi and Matteo Pessina are the only players to have pulled out from the Italy squad due to injury.

As always, Italy will line up in their usual 4-3-3 setup, with Gianluigi Donnarumma set to take his place in goal. There will be at least one forced change, though, in front of the 22-year-old, with Leonardo Bonucci suspended for the game after being sent off against Spain.

In the absence of one experienced head, another will sit at the heart of the Italy defence, with Giorgio Chiellini set to be recalled. And Francesco Acerbi ought to be the Italy captain’s central defensive partner, with Alessandro Bastoni making way after not being entirely comfortable last time out.

In fact, Mancini could well field a new-look backline, with Davide Calabria replacing Giovanni Di Lorenzo at right-back while Federico Dimarco might come in for Emerson Palmieri. Up ahead in midfield, Manuel Locatelli is in line to return and likely to sit at the base of the three-man unit, with Nicolo Barella and Lorenzo Pellegrini expected to be the two creative midfielders.

Finally, in attack, Giacomo Raspadori could be in line to make his first start in the UEFA Nations League after the lack of success with the “False Nine” experiment, with Federico Bernardeschi set to make way. Federico Chiesa, though, will start once again as he continues to establish himself as a talisman for Italy. The final spot in the attacking unit will be handed to Domenico Berardi, with Lorenzo Insigne bowing out. 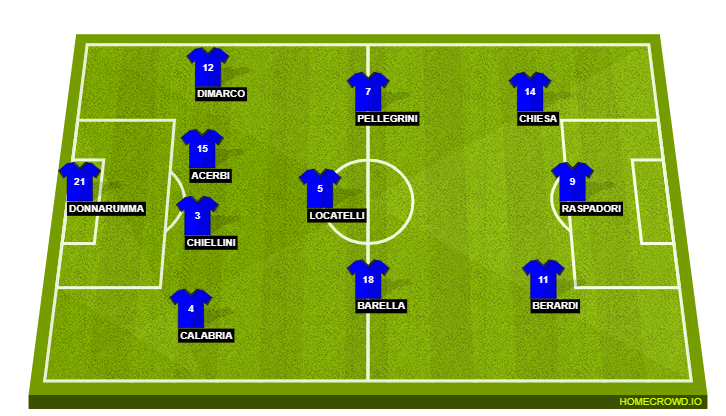 Like his counterpart in the Italy dugout, Roberto Martinez has faced the ignominy of losing some of the players he picked in the original squad. Borussia Dortmund duo Thomas Meunier and Thorgan Hazard have withdrawn from the Belgium squad after sustaining minor injuries. However while Meunier was replaced by Thomas Foket, Hazard has interestingly made way for a centre-back in Arthur Theate.

As far as team selection is concerned Martinez could be set to make some major changes to his starting lineup in the wake of some damning comments by Thibaut Courtois. The Belgium no. 1 has claimed that the third-place fixture is pointless, which might essentially mean that the Red Devils might not really take the game too seriously.

With that in mind, it looks like creative lynchpin Kevin De Bruyne could be rested for this game, with Alexis Saelemaekers coming into the side. In addition, Eden Hazard is likely to miss out as well, albeit due to a knock after sustaining yet another injury last time out against France.

In place of the Belgium captain, Leandro Trossard ought to be a part of the starting lineup, getting a rare chance to impress. Romelu Lukaku, though, should continue leading the line for Belgium after an impressive performance last time out against France.

As for the midfield unit, Hans Vanaken ought to replace Youri Tielemans following a disastrous showing in the semi-final. However, Axel Witsel should retain his spot, looking to stifle Italy’s creative midfielders when they look to engineer the chances. Out wide, Foket and Yannick Carrasco are expected to be the two wing-backs.

At the back, uncapped Theate could be set to make his Belgium debut, replacing Toby Alderweireld, with Dedryck Boyata coming in for Jason Denayer. Jan Vertonghen, though, will keep his spot and is likely to don the captain’s armband for Belgium. In goal, Simon Mignolet will likely replace Courtois, who evidently does not care much about the game. 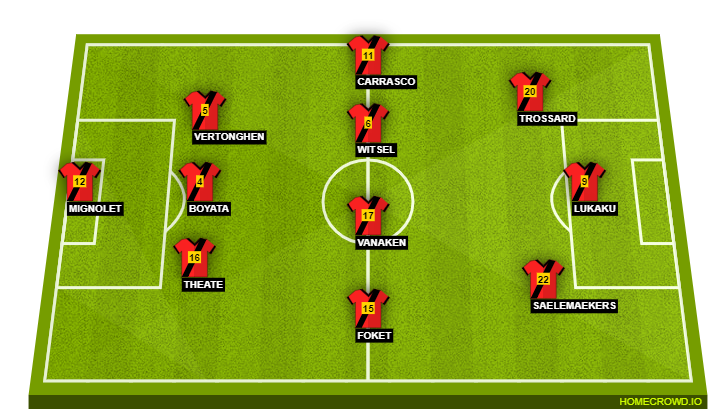 It goes without saying that Donnarumma did not have a good time in the Nations League semi-final tie with Spain earlier this week. Back at San Siro for the first time since leaving AC Milan as a free agent to join Paris Saint-Germain, a major chunk of the Italian fans present at the stadium ensured he was made aware of their feelings over the transfer.

Roberto Mancini has since condemned the fans’ behaviour, giving his backing to Donnarumma. Now set to play at the Allianz Stadium, the 22-year-old will be raring to hit back at his naysayers and ensure that the France game was but an aberration. So, with that in mind, it remains to be seen if he can keep the dangerous Romelu Lukaku at bay.

Both Italy and Belgium are line up with largely new-look starting lineups, with Roberto Mancini and Roberto Martinez aiming to give a number of promising players a run while still retaining a few key stars. Having said that, Italy will still be quite a formidable side that can exploit a lot of holes that Belgium will present.

Romelu Lukaku ought to be on target again for the Red Devils, but on the opposite end, it will be the Federico Chiesa show, with the 23-year-old leaving his mark on the game. With that in mind, The Hard Tackle predicts a 2-1 win for Italy, who will clinch third place in the second edition of the UEFA Nations League.