Chelsea and Juventus will be aiming to continue their unbeaten start to their respective UEFA Champions League campaign when they face off on Wednesday.

The curtains will drop on Matchday 2 of the group stage of the UEFA Champions League on Wednesday, with teams from the remaining four groups in action. One the big games on the day will be played at the Allianz Stadium, where Juventus will play hosts to Chelsea.

Juventus have been on a roller-coaster of a ride at the start of the 2021/22 season, having struggled enormously in Serie A while winning their opening game in the UEFA Champions League. The aforementioned result – a 3-0 win over Malmo – has helped the Bianconeri become the early leaders in Group H while in the Italian top-flight, they 10th after winning just two of the first six games.

Chelsea, on the other hand, suffered their first defeat of the season only this past weekend, as they produced a listless performance in their defeat to Manchester City. Otherwise, though, the Blues have been nearly imperious, failing to win just one of their seven other games while in Europe, they beat Zenit St. Petersburg 1-0 on Matchday 1.

Juventus were 3-0 winners the last time they hosts Chelsea in Turin, with Fabio Quagliarella, Arturo Vidal and Sebastian Giovinco scoring in a group game. Ahead of the latest meeting between the two sides, The Hard Tackle takes a closer look at the encounter.

🎙 Allegri: "@arthurhromelo is behind with regards to physical progress. We will play two friendlies during the international break that will help him to improve his condition."#JuveChelsea #JuveUCL

Massimiliano Allegri has been handed a double blow on the team news front ahead of the visit of Chelsea. In the UEFA Champions League Group H game on Wednesday, the Juventus boss could be bereft of the services of as many as four first-team players.

The major absentees for the hosts are Alvaro Morata (hamstring) and Paulo Dybala (thigh), both of whom sustained short-term injuries this past weekend. The attacking duo will now miss the last two games ahead of the international break and will only return in two weeks’ time.

The absence of Morata and Dybala means Allegri’s attacking resources are severely depleted, with the three starting players pretty much picking themselves. Federico Chiesa, who has recently been linked with Chelsea, and Moise Kean are certain starters while Dejan Kulusevski ought to pip Federico Bernardeschi for the spot on the right flank.

As for the midfield unit, the onus will be on Manuel Locatelli to set the tempo of the game while helping Juventus assert their control over Chelsea. The Italian international ought to have Rodrigo Bentancur and Adrien Rabiot for company in the middle of the park, with the duo being workhorses in midfield for the hosts.

At the back, Giorgio Chiellini and Leonardo Bonucci are expected to pair up at the heart of the Juventus defence, with Danilo and Alex Sandro likely to be the two full-backs. Finally, in goal, Mattia Perin could be preferred ahead of Wojciech Szczesny once again, especially with the Pole struggling so far this season. 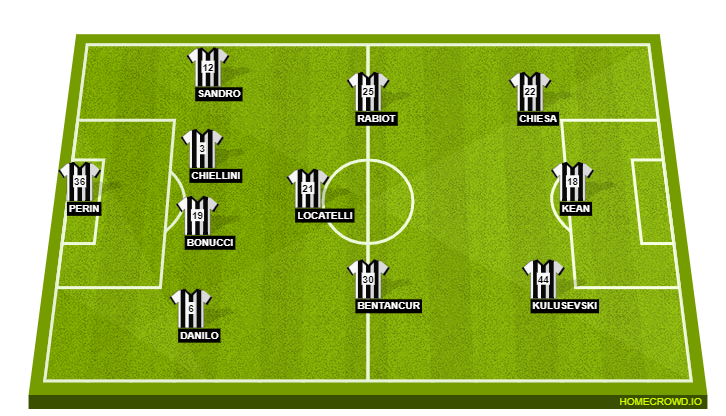 Like his counterpart in the Juventus dugout, Thomas Tuchel has a fresh fitness issue hampering his preparations ahead of the trip to the Allianz Stadium. On Wednesday, the Chelsea manager will have to make do without four first-team players.

Reece James sustained an ankle injury this past weekend against Manchester City and will play no part for Chelsea at Juventus. The English international has joined Mason Mount (knock) and Christian Pulisic (ankle) on the sidelines. The fourth and final absentee for Chelsea is N’Golo Kante, who is self-isolating after testing positive for COVID-19.

However, Jorginho ought to be fit enough to start despite sustaining a knock on the weekend. The Chelsea vice-captain will line up alongside Mateo Kovacic in the middle of the park, with Tuchel set to revert to the usual 3-4-3 formation following the catastrophic failure of the 3-5-2 against City.

In the absence of James, captain Cesar Azpilicueta will take up the right wing-back slot, with Marcos Alonso a certainty on the left flank. Azpilicueta’s vacant spot in the three-man central defensive unit will likely go to Thiago Silva, who will join Andreas Christensen and Antonio Rudiger at the back while in goal, Edouard Mendy will start ahead of Kepa Arrizabalga again.

Finally, in attack, the additional spot will likely be occupied by Kai Havertz, who will start on the right side of the three-man unit, with Timo Werner starting on the left flank while Romelu Lukaku will lead the line for Chelsea against Juventus. 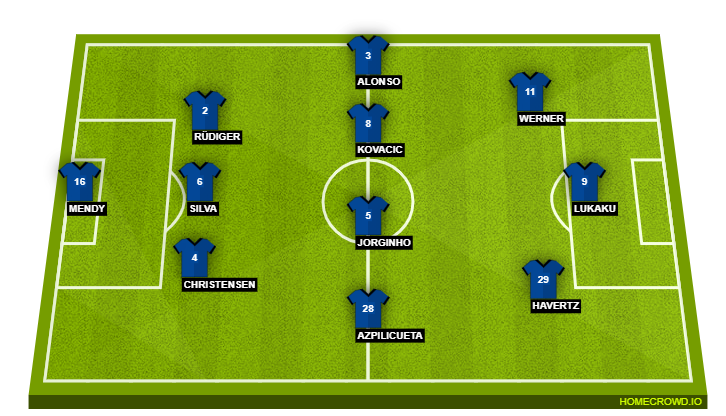 It has been another difficult start to a season for Kai Havertz, who is struggling to perform on a consistent basis for Chelsea. While there is no shortage of talent in the German international, the competition for places in the first-team setup at the west London club means that the margin of error is incredibly slim.

Now, though, Havertz have been given a golden opportunity to seal his place in the side, and a game-changing performance on Wednesday will go a long way in ensuring that. Whether the young attacker manages to make his chance count remains to be seen.

Chelsea might have been outplayed by Manchester City last time out but that really is an aberration as far as their form under Thomas Tuchel is concerned. The Blues should once again revert to type this midweek against Juventus, giving the hosts little to no room to exploit in the UEFA Champions League clash.

However, on the opposite end, the chances are unlikely to flow seamlessly for Chelsea owing to the potential absence of Mason Mount. Nevertheless, the Blues should do just about enough to break the deadlock, with Romelu Lukaku likely to be the man on the scoresheet again. The Hard Tackle predicts a 1-0 win for Tuchel & co.