Brighton & Hove Albion will have the chance to climb to the top of the Premier League table when they take on Crystal Palace at Selhurst Park on Monday.

The curtains will fall on Gameweek 6 of the 2021/22 Premier League season on Monday, with just one game left to be played in the latest round of fixtures, as Crystal Palace play hosts to Brighton & Hove Albion at Selhurst Park, with the visitors having a rare opportunity to scale the summit of the table.

Crystal Palace have shown some bright sparks in the nascent stages of Patrick Vieira’s tenure at the club. However, the fact that the Eagles have managed just one win under the tutelage of the new manager means that the Frenchman has quite an uphill task at hand to get his ideas through to the squad, with his team currently down at 15th in the table.

Brighton & Hove Albion, on the other hand, have been extremely efficient in the early stages of the 2021/22 season. The Seagulls often frustrated last season with their tendency to create a raft of chances only to not finish them. However, that has changed for the better this term, with Graham Potter’s men grabbing four wins in their opening five Premier League fixtures as a result.

The corresponding fixture last season saw Brighton come from a goal down to hold Crystal Palace to a 1-1 draw, with Alexis Mac Allister cancelling Wilfried Zaha’s 19th minute strike. Ahead of the latest meeting between the two sides, The Hard Tackle takes a closer look at the encounter.

Patrick Vieira does not have any fresh injury concerns hampering his preparations ahead of the visit of Brighton & Hove Albion. On Monday, the Crystal Palace manager will only be bereft of the services of two first-team players, with Nathan Ferguson and Eberechi Eze recovering from their respective achilles injuries.

The good news, though, is that Jeffrey Schlupp has regained full fitness and will be in contention to feature against Brighton. The 28-year-old, though, is only likely to make an appearance off the bench, especially with the midfield and attacking slots pretty much being nailed down.

Wilfried Zaha and Jordan Ayew are certainties out wide for Crystal Palace, with Zaha making a great deal of difference with his pacy outlet. Ayew, on the other hand, is the hustler of the team and will look to harry the opponents off the ball while recycling possession quickly. Leading the line for Crystal Palace is likely to be Odsonne Edouard.

As for the three-man midfield unit, Cheikhou Kouyate is expected to start ahead of captain Luka Milivojevic once again, sitting at the base, with defensive support coming from Conor Gallagher and James McArthur. Gallagher will also be the creative force for Crystal Palace from the middle of the park.

At the back, Joachim Andersen and Marc Guehi will continue their central defensive partnership, with Joel Ward and Tyrick Mitchell picking themselves as the two full-backs. Finally, in goal, Vicente Guaita picks himself. 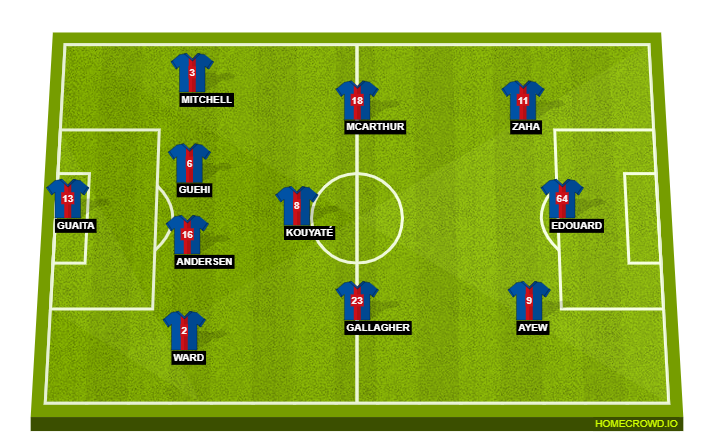 Unlike his counterpart in the Crystal Palace dugout, Graham Potter is sweating over the fitness of quite a few players ahead of the trip to Selhurst Park. On Monday, the Brighton & Hove Albion boss could have to make do without four first-team players.

In particular, the fitness of Yves Bissouma is a concern, with the Malian midfielder struggling with a knee injury. However, Bissouma is likely to prove his fitness to line up in the middle of the park alongside Adam Lallana.

However, Adam Webster (hamstring) definitely misses out with a hamstring injury while Enock Mwepu (groin) and Alexis Mac Allister (back) are major doubts for the game on Monday. In the absence of Mac Allister, the attacking unit pretty much picks itself.

Neal Maupay is set to spearhead the Brighton attack against Crystal Palace, with Danny Welbeck lining up on the left flank, while Leandro Trossard will be stationed on the right wing. The front trio, though, will be fluid in their movement and will interchange positions regularly.

As for the defensive department, Shane Duffy has been a man reborn since returning from his loan spell in Scotland. The veteran defender ought to be the sweeper in the back three, with captain Lewis Dunk and Joel Veltman starting alongside him. Solly March and Marc Cucurella, meanwhile, will be the marauding wing-backs while Robert Sanchez is an automatic pick between the sticks. 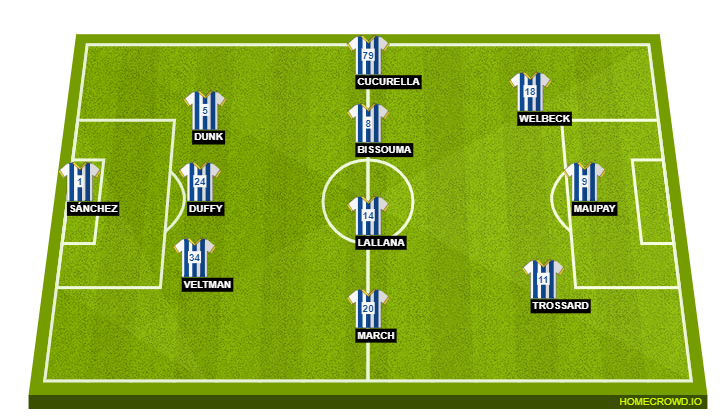 It was a signing that came with a lot of excitement from the Crystal Palace fans, and for good reason. After all, despite being an unhappy customer in his final months at Celtic, the Frenchman still managed to be a prolific customer in front of goal.

That is a good sign for Crystal Palace, who have often been frustrated by the profligacy displayed by Christian Benteke in front of goal. Edouard, on the other hand, showed what he is all about pretty much since he first kicked a ball for the Eagles and has now earned a start. A big game beckons the French striker.

Brighton & Hove Albion have been getting quite a few close wins at the onset of the 2021/22 season and there is a sense that they are there for the taking, especially with a few holes emerging at the back. Crystal Palace should exploit some of those holes, with the partnership of Wilfried Zaha and Odsonne Edouard set to start blossoming.

However, the Eagles have some chinks in their own armoury as well and with Brighton starting to become more ruthless in the final third, it appears as if the hosts could concede a couple of cheap goals. That should be enough for Brighton to eke out another close win, which in turn will take them to the top of the Premier League table.