Barcelona will be desperate to return to winning ways and kick-start their La Liga campaign when they welcome Levante to Camp Nou on Sunday.

The 2021/22 La Liga season continues with Matchday 7 this weekend and on Sunday, as many as five matches will be on show. The second game on the day will be played at Camp Nou where a beleaguered Barcelona will be playing hosts to Levante.

Barcelona have lost just one of their six games so far this season but there is already a sense of instability surrounding them. Indeed, the future of Ronald Koeman is as uncertain as it has ever been while it is also important to note that the Blaugrana have only won two of their matches, and are already nine points behind La Liga leaders Real Madrid, with the gulf already seeming to be insurmountable.

Levante, on the other hand, are yet to get their first win of the season, with their winless start to the season leaving them tottering at 16th on the table. The Granotes might have lost just two of their six games so far, but their profligacy in the final third has proven to be their undoing in the early stages of the campaign.

The corresponding fixture last season saw Barcelona eke out a narrow 1-0 win over Levante, with the now-departed Lionel Messi scoring the only goal of the match-up. Ahead of the latest meeting between the two sides, the Hard Tackle takes a closer look at the encounter.

Ronald Koeman has a raft of roster issues hampering his preparations ahead of the visit of Levante. On Sunday, the Barcelona manager will be bereft of the services of as many as eight first-team players due to suspension or fitness concerns.

The major absentees for Barcelona are key midfielders Frenkie de Jong and Pedri, with the former suspended after being sent off against Cadiz while the latter is out till November due to a meniscus injury. In addition, Jordi Alba is also a key absentee due to a hamstring complaint.

The likes of Alejandro Balde (back), Moussa Wague (knee), Ousmane Dembele (knee), Sergio Aguero (calf) and Martin Braithwaite (knee) are all sidelined as well. However, there is some good news, as Ansu Fati is back in contention after taking part in full training of late.

The teenage prodigy is unlikely to start a game straightaway but is set to receive minutes off the bench later in the game. As for the attacking players who will make the starting lineup, Memphis Depay is a certainty on the left flank while Luuk de Jong is likely to lead the line for Barcelona, with Philippe Coutinho lining up in the final third.

As for the midfield unit, with Riqui Puig not really favoured by Koeman to this day, the likes of Gavi, Sergio Busquets and Sergi Roberto pretty much pick themselves. At the back, Ronald Araujo and Gerard Pique should pair up at the heart of the Barcelona defence, with Oscar Mingueza and Sergino Dest starting as the makeshift full-backs. In goal, there is no looking past Marc-Andre ter Stegen. 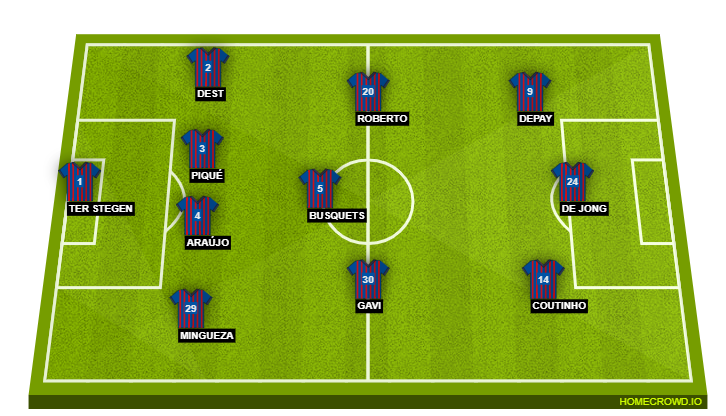 Unlike his counterpart in the Barcelona dugout, Paco Lopez does not have too many injury woes to deal with ahead of the trip to Camp Nou. On Sunday, the Levante manager will have to make do without just four first-team players, with none of the players expected to return ahead of the international break.

Dani Cardenas is nursing a thigh injury while midfielders Jose Campana and Enis Bardhi miss out due to calf and thigh injuries, respectively. The fourth and final absentee for Levante is Roberto Soldado, who is unavailable due to a groin issue.

In the absence of Soldado, Roger Marti picks himself as the strike partner for captain Jose Luis Morales, with Levante set to line up in a 4-4-2 formation against Barcelona. Dani Gomez will be an option off the bench for the hosts.

As for the midfield unit, the onus will be on Nemanja Radoja and Pablo Martinez to keep things tight in the middle of the park and keep a check on Gavi, in particular. Jorge de Frutos and Gonzalo Melero will be the two wide men for the visitors, with de Frutos largely providing the creative impetus.

Shkodran Mustafi has been growing in stature since returning to La Liga and will take his place at the heart of the Levante defence alongside Oscar Duarte. Jorge Miramon and Carlos Clerc will be the two full-backs, with the duo providing the width higher up the pitch while in goal, there is no looking past Aitor Fernandez in the absence of Cardenas. 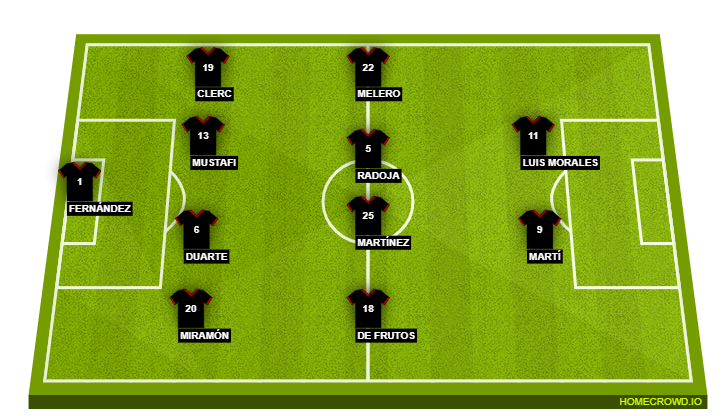 While all eyes will be on Ansu Fati, whose return will be awaited with bated breaths as far as the Barcelona fans are concerned, the larger context of the game will need someone else to provide a bigger contribution to arrest what looks to be the onset of a slump for the Blaugrana. With that in mind, Gavi is our Player to Watch in this game.

A player who has grown in stature rapidly since making his first-team debut recently, Gavi has been defying the logic of age and maturity, outshining players far more experienced than him. And the 17-year-old will once again hold the key in the middle of the park for Barcelona if they are to take anything from the game before Fati is introduced late on.

Frenkie de Jong will be a big miss for Barcelona, but the growing influence of Gavi ought to help Barcelona mitigate the Dutchman’s absence against Levante. Another Dutchman who will be nowhere to be seen on Sunday is manager Ronald Koeman, who was shown a red card against Cadiz earlier in the week.

Whether that proves to be a good omen for Barcelona remains to be seen, but the excitement of Ansu Fati’s return surely ought to leave the players in high spirits, potentially helping them turn things around, even if they end up winning the game by a mere one-goal advantage. The Hard Tackle predicts a 1-0 win for Barcelona here.