Manchester United will aim to continue their unbeaten start to their Premier League campaign when they host Aston Villa to Old Trafford on Saturday.

Premier League action resumes this weekend, with Gameweek 6 of the 2021/22 season kicking off on Saturday with two lunch-time fixtures scheduled. One of these two games will be played at Old Trafford, where Manchester United will play hosts to Aston Villa.

For Manchester United, the early stages of the season have been a case of Premier League or bust. The Red Devils have been nigh on untarnished in the top-flight so far, winning four of their first five games. However, they have lost each of their two fixtures in other competitions so far, with BSC Young Boys beating them last week in the Champions League while West Ham booted them out of the Carabao Cup.

Aston Villa, like Manchester United, have not had the best of weeks, having been ousted of the EFL Cup themselves, losing out to Chelsea on penalties. In the Premier League, though, the Villans have blown hot and cold, winning two and losing as many games so far, although their most recent result was a 3-0 win over Everton last weekend.

The corresponding fixture last season saw Manchester United eke out a narrow 2-1 win over Aston Villa, with Bruno Fernandes scoring the match-winning penalty. Ahead of the latest meeting between the two sides, The Hard Tackle takes a closer look at the encounter.

Edinson Cavani is back in the #MUFC squad for tomorrow as they welcome Aston Villa to Old Trafford.pic.twitter.com/jbg7zTHtND

Ole Gunnar Solskjaer has been handed a boost on the team news front ahead of the visit of Aston Villa. On Saturday, the Manchester United manager will only be bereft of the services of two first-team players, with Marcus Rashford being the major absentee, although he is closing in on his return from a shoulder injury.

The good news comes in the form of Edinson Cavani’s return to fitness, with the veteran striker rejoining full training this week. The Uruguayan international is in contention to feature against Aston Villa, although he is unlikely to start ahead of Cristiano Ronaldo, who was rested earlier in the week versus West Ham United.

While Ronaldo will lead the line for Manchester United, Bruno Fernandes and Paul Pogba will be the chief creators for the hosts, with the latter likely to be deployed on the left flank ahead of Jadon Sancho. On the right-wing, there is no looking past Mason Greenwood, who looked lively off the bench in the cup fixture.

Pogba’s positioning higher up the pitch means Scott McTominay is likely to have Fred for company in the midfield double pivot. The duo’s presence in the middle of the park will provide Manchester United with a relatively more solid base in front of the defenders, although the Red Devils will still have a soft underbelly.

At the heart of the Manchester United defence, there is no looking past Raphael Varane and Harry Maguire, with Aaron Wan-Bissaka and Luke Shaw being the two full-backs. Finally, in goal, David de Gea is the undisputed first-choice following some brilliant performances at the start of the season, like the one against West Ham last week. 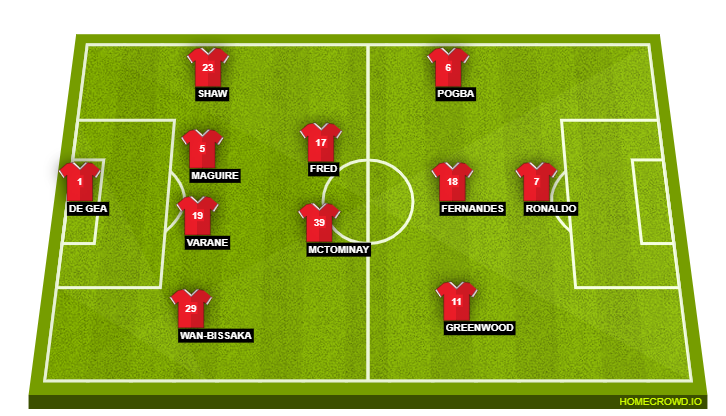 Unlike his counterpart in the Manchester United dugout, Dean Smith has a number of roster issues hampering his preparations ahead of the trip to Old Trafford. On Saturday, the Aston Villa manager could have to make do without as many as six first-team players.

The major absentees for Villa is Leon Bailey, who was top class off the bench against Everton last week. The Jamaican winger, though, is unavailable due to a hamstring injury he sustained in the same game. The rest of the sidelined players are Morgan Sanson (hamstring), Trezeguet (knee) and Keinan Davis (knee).

In addition, Axel Tuanzebe is unavailable as he is ineligible to face parent club Manchester United. Finally, Smith is sweating over the fitness of Matt Targett, who is recovering from a groin injury. The 26-year-old will face a late fitness test, although it appears likely that Ashley Young will start instead.

The former Manchester United captain will likely be deployed in a left wing-back role, with Aston Villa likely to line up in a 3-5-2 formation. The role should suit Young better after struggling against Callum Hudson-Odoi in the Carabao Cup fixture. On the right flank, the in-form Matty Cash is a certainty.

As for the three-man central defensive unit, Kortney Hause, Tyrone Mings and Ezri Konsa pick themselves, with Hause earning the start on Saturday after a solid showing earlier in the week. In goal, Emiliano Martinez is an automatic pick while in midfield, John McGinn, Marvelous Nakamba and Douglas Luiz are expected to start.

McGinn will be the ball carrier for Aston Villa while Luiz and Nakamba will have the onus on them to keep things tight in the middle of the park. Finally, Danny Ings and Ollie Watkins ought to form the strike partnership, with Bertrand Traore and Emiliano Buendia being options off the bench. 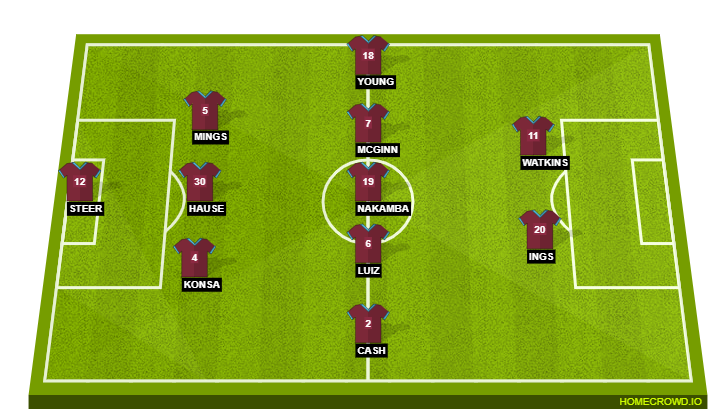 Manchester United might be unbeaten in the Premier League so far this season, but they have let in a goal in all but one of their games so far which has largely been down to a vulnerable midfield unit. Indeed, the reluctance to sign a defensive midfielder this past summer could be a decision that comes back to haunt the Red Devils.

With that in mind, the onus will be on Scott McTominay to play out of his skin week in week out to ensure Manchester United do not concede cheap goals. With Aston Villa unlikely to start a creative midfielder, the Scottish international’s job will be that much easier, although a big performance will still be the difference between a clean sheet and another cheap goal.

There is something about Manchester United that is so unconvincing, especially on the defensive front. For all their firepower, the Red Devils always remain susceptible to conceding unnecessary goals, and that will keep Aston Villa in play on Saturday.

However, in Cristiano Ronaldo and Mason Greenwood, Ole Gunnar Solskjaer has two of the most in-form attacking players in the Premier League at his disposal. The duo should come to the party in the game, delivering a 2-1 win for Manchester United, who will once again let in a cheap goal this time around.