Real Madrid and Valencia will both have the chance to climb atop La Liga standings when they lock horns at the Mestalla on Sunday.

The games continue to arrive thick and fast all across Europe and on Sunday, as many as four matches will be played as part of Matchday 5 of the 2021/22 La Liga season. The proceedings on the day will come to an end at the Mestalla, where Valencia will play hosts to Real Madrid.

Valencia appear to be making some definitive progress under the tutelage of Jose Bordalas, having won three of their first four games to get into the top four early in the campaign. The USP of the team is quickly becoming a Bordalas trademark, having added a lot of resilience to their defensive product.

Real Madrid, on the other hand, have also begun life under a new manager this season, with Carlo Ancelotti adding a lot of verve to the team’s display. Like Valencia, Los Blancos have won three and drawn one of their four La Liga games so far, which has helped them remain among the better teams in the division.  And most recently, Real Madrid grabbed a 1-0 win over Inter Milan in their UEFA Champions League opener.

The corresponding fixture last season saw Valencia come from a goal down to beat Real Madrid 4-1, with Carlos Soler scoring a match-winning hat-trick. Ahead of the latest meeting between the two sides, The Hard Tackle takes a closer look at the encounter.

🗣️Bordalás: "Tomorrow we will have the heart of Valencia CF -the fans at Mestalla- on our side"#VCFDNA 🦇

Jose Bordalas barely has any fresh injury concerns hampering his preparations ahead of the visit of Real Madrid. On Sunday, the Valencia manager will only have to make do without one first-team player, with Denis Cheryshev recovering from a knee injury.

Bordalas, though, appears to have enough cover in his squad to make up for the absence of the Russian winger. While the Valencia boss has plenty of wingers at his disposal, it is Dimitri Folquier who is likely to get the nod on the left wing in Cheryshev’s stead.

On the opposite flank, Carlos Soler is a certainty, with the Spanish international likely to drift in more often than not when charging forward. The two wide midfielders will flank Hugo Guillamon and Daniel Wass, with the duo looking to curb the creative output of Luka Modric, in particular.

Upfront, Goncalo Guedes will pair up with Maxi Gomez to form the strike partnership for Valencia. Guedes will have the tendency to room and veer towards the flanks, which will then open up the space for Gomez to pounce on.

At the back, the onus will be on Jose Gaya to create the openings for the attackers while also looking to keep his marker quiet for the most part. On the opposite flank, Thierry Correira is likely to get the nod over Cristiano Piccini. At the heart of the Valencia defence, Gabriel Paulista will have Omar Alderete for company, with Giorgi Mamardashvili taking his place in goal. 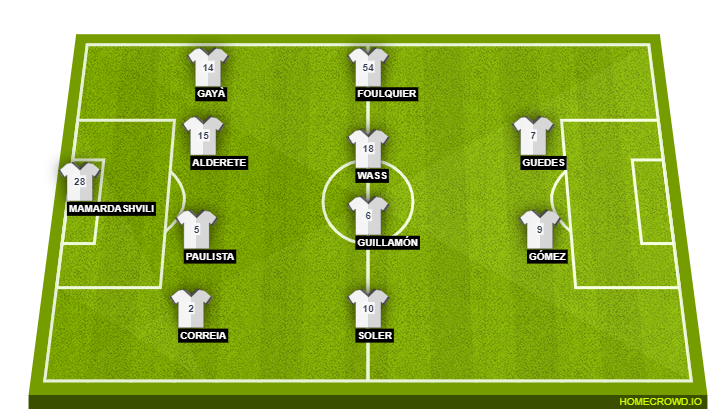 Unlike his counterpart in the Valencia dugout, Carlo Ancelotti has a number of major fitness woes to contend with ahead of the trip to the Mestalla. On Sunday, the Real Madrid manager will be bereft of the services of as many as five first-team players.

The major absentee for the visitors is Toni Kroos, who is still out with a muscle injury. In addition, Ancelotti is also Marcelo (leg), Ferland Mendy (muscle injury), Dani Ceballos (ankle) and Gareth Bale (hamstring) are also unavailable to take on Valencia.

The major selection decisi0n for Ancelotti will centre around the left-back slot, with Nacho likely to edge out Miguel Gutierrez to the spot. With Nacho expected to be deployed on the left flank, David Alaba could be pairing up with Eder Militao at the heart of the Real Madrid defence, with Aaron Wan-Bissaka a certainty as the right-back.

Up ahead in midfield, Luka Modric will hold the key for Real Madrid if they are to put Valencia under any pressure. Federico Valverde and Casemiro will add steel to the midfield unit, with Eduardo Camavinga likely to be introduced later on in the game.

Finally, in attack, the in-form Karim Benzema picks himself, with his status as the first-choice striker is unquestionable. Vinicius Jr. too has made a case for regular inclusion, with the Brazilian winger growing into his role at the Santiago Bernabeu. The third and final spot will be handed to Rodrygo Goes, following an impressing showing against Inter Milan in the Champions League. 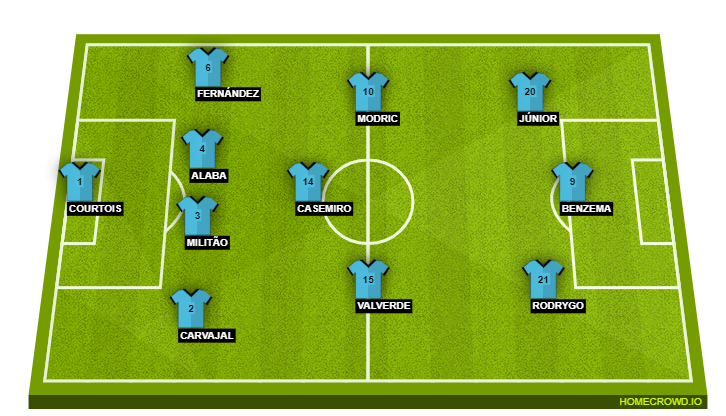 Karim Benzema was and will remain Real Madrid’s talisman, as he continues to go from strength to strength despite his advancing age. However, with the Frenchman doing the bulk of the scoring for Real Madrid, there has been a serious need for an attacker who can shoulder some of the burden.

It now looks like Vinicius Jr. is the player who is stepping up, and actually doing so in a big manner ‘early in the 2021/22 season and if he is to continue his fine run of form, Eden Hazard would be given a run for his money. At the same time, Vinicius’s form is important also because it contributes to the grand scheme of things for the club.

Real Madrid appear to have had a mental block when visiting the Mestalla, and it was never clearer than last season, when they were beaten quite easily by Los Che. Things, though, have changed a fair bit at both the clubs, with the two sides improving their defensive output considerably.

Real Madrid, however, have the edge in this game despite their recent record away at Valencia, owing to the fine form of Karim Benzema and Vinicius Jr. in addition to the resurgent Rodrygo Goes appears to be getting back to his best. With all that in mind, The Hard Tackle predicts a 2-1 win for Real Madrid, in what will be a game that could be too close for comfort.