Inter Milan will hope to extend their unbeaten start to the Serie A season and claim top spot on the table when they welcome Bologna to San Siro on Saturday.

The season continues to unfold in its nascent stages, with different narratives being created by the week. This weekend, Matchday 4 of the 2021/22 Serie A season gets underway, with Inter Milan one of the teams taking the field on Saturday, when they will play hosts to Bologna at San Siro.

Inter Milan are in a transitional period at the moment following the appointment of Simone Inzaghi as Antonio Conte’s replacement. The Nerazzurri have been decent enough in the defence of their Serie A crown so far, although they dropped points for the first time last week when they were held to a 2-2 draw by Sampdoria. And the 1-0 defeat Real Madrid means Inter are now without a win in two games.

Bologna, on the other hand, have a similar record as their hosts, having won two and drawn one of their three Serie A games so far. However, an inferior goal scoring record means the Rossoblu are down at 6th in the standings, with Inter two places ahead in 4th. Having said that, the defensive unit is showing much promise despite the attacking department being frugal lately.

The corresponding fixture last season saw Inter Milan run out 3-1 winners against Bologna, with Romelu Lukaku and Achraf Hakimi (twice) on target while Emanuel Vignato scoring for the visitors. Ahead of the latest meeting between the two sides, The Hard Tackle takes a closer look at the encounter.

Stefano Sensi is not available to take on Bologna due to a knee injury. (Photo by Claudio Villa/Getty Images)

Simone Inzaghi barely has any injury concern hampering his preparations ahead of the visit to Bologna. On Saturday, the Inter Milan manager will be bereft of the services of just one first-team player, with Stefano Sensi still recovering from a knee injury.

Inter have not had to transition much in terms of the formation in play from Antonio Conte to Inzaghi, even though the ideology is slightly different. Oddly, though, Inzaghi has largely preferred Ivan Perisic as the left wing-back ahead of Federico Dimarco, with the Croat likely to reprise the same role against Bologna as well.

On the opposite flank, Denzel Dumfries ought to replace Matteo Darmian, and along with Perisic, he will be responsible for providing the width in the final third. The duo’s cross abilities will bring Edin Dzeko into the game, with Joaquin Correa playing off of the veteran striker.

Midfield will hold the key for Inter as far as chance creation is concerned, and Inzaghi has two of the best playmakers in Serie A at his disposal in the form of Nicolo Barella and Hakan Calhanoglu. In addition, Marcelo Brozovic will also create a few chances here and there while also holding the fort in front of the three centre-backs.

Speaking of, the three-man central defensive unit is likely to comprise of the usual suspects in Milan Skriniar, Stefan de Vrij and Alessandro Bastoni while in goal, there is no looking past captain Samir Handanovic. 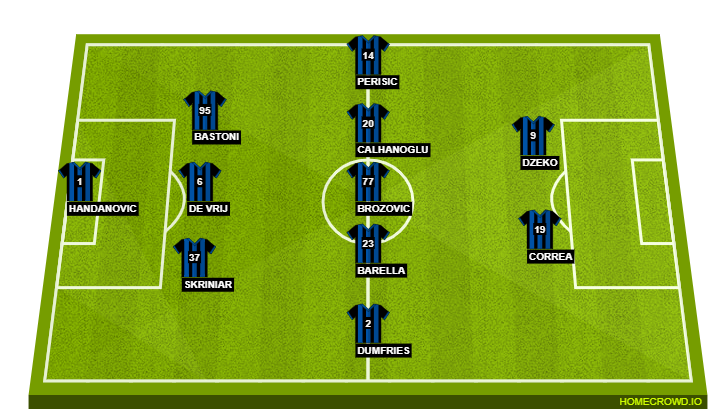 Unlike his counterpart in the Inter Milan dugout, Sinisa Mihajlovic has a couple of pressing issues to contend with ahead of the trip to San Siro. On Saturday, the Bologna manager will have to make do without Jerdy Schouten and Kingsley Michael due to their respective muscle injuries.

Lukasz Skorupski is a certainty between the sticks for Bologna, who will line up in a 4-2-3-1 formation against Inter Milan. At the heart of their defence, Kevin Bonifazi and former Inter star Gary Medel will be busy men, and will need all the support that they can garner from the two full-backs – Lorenzo De Silvestri and Aaron Hickey.

Up ahead in midfield, Mattias Svanberg and Nicolas Dominguez will form a pragmatic and solid double pivot, with the duo looking to keep things tight in the middle of the park and keep a check on the output of Nicolo Barella and Hakan Calhanoglu.

The chief creator for Bologna will be captain Roberto Soriano, who will be flanked by potent wingers in Riccardo Orsolini and Musa Barrow. Finally, Marko Arnautovic will lead the line for Bologna against Inter Milan. 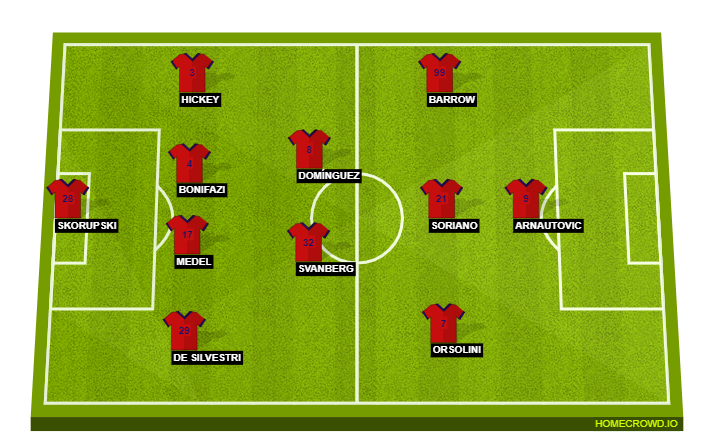 Following the departure of Romelu Lukaku, much of the spotlight has been on Lautaro Martinez and how the Argentine will cope in his absence. However, one player who needs to be pulling his weight despite being in the twilight of his career is Edin Dzeko.

For years now, Dzeko has been one of the best strikers on show in Serie A. Now, though, the 35-year-old has even more responsibility on his shoulders, playing for a team with genuine chances of winning the Serie A title, meaning he needs to be as clinical as he has ever been, starting with the game against Bologna.

Bologna have often proven to be the thorn on Inter Milan’s side over the past decade or so. And it goes without saying that a team that is yet to face defeat so far this term will pose a lot of problems for the Nerazzurri, who have not been at the reassuring best in the early stages of the campaign.

The tensions should, therefore, be on a simmer all game long, which will largely lead to half chances rather than more clear-cut opportunities. And so, a moment of genius will be needed to make the difference in this one, which is where Lautaro Martinez could come in later in the game, scoring the only goal to grab all three points for Inter.