West Ham United will aim to begin their UEFA Europa League campaign on a strong note when they face Dinamo Zagreb at Stadion Maksimir on Thursday.

The UEFA Europa League is set to kick off on Thursday, with Matchday 1 of the group stage slated for this week. And West Ham United will be hoping to start their campaign on a positive note when they take on Dinamo Zagreb at Stadion Maksimir.

Dinamo Zagreb have been the case of varied fortunes in domestic football and Europe so far this season. The Purgeri have been largely imperious in 1. HNL, sitting atop the table following their opening seven games. However, in Europe, Damir Krznar are in the Europa League as they failed to make it to the Champions League via the playoffs route, losing to Sheriff Tiraspol in the final round.

West Ham United, on the other hand, are in the Europa League group stage courtesy of securing a top six finish in the Premier League last season. The Hammers have only played league football so far this term, and they are unbeaten after their first four outings, winning twice and drawing as many games to sit 8th in the standings.

Thursday’s fixture will be the first occasion wherein Dinamo Zagreb and West Ham United will clash with each other and ahead of the latest meeting between the two sides, The Hard Tackle takes a closer look at the encounter.

Damir Krznar has a number of injury issues hampering his preparations ahead of the visit of West Ham United. On Thursday, the Dinamo Zagreb manager will be bereft of the services of three first-team players.

First-choice goalkeeper Dominik Livakovic continues to be sidelined; as are Dino Peric and Mario Gavranovic. However, captain Arijan Ademi is likely to be fit enough to start after recently making his recovery from an injury.

In the absence of Livakovic, Danijel Zagorac will deputise between the sticks for Dinamo Zagreb, who will line up in a 3-4-3 formation against West Ham. The three-man central defensive unit will comprise of Rasmus Lauritsen, Josip Sutalo and Kevin Theophile-Catherine, with Stefan Ristovski and Francois Moubandje being deployed out wide.

The two wing-backs will have a lot of responsibility on their shoulders as they will provide the width higher up the pitch while also enabling Dinamo Zagreb to shut off space at the back during the defensive phases. In the middle of the park, Ademi and Josip Misic will have the onus on them to shut off the supply line towards Michail Antonio.

Finally, in attack, Bruno Petkovic will lead the line for Dinamo Zagreb against West Ham, with Luka Ivanusec and Mislav Orsic providing the support cast for the central striker. The duo will largely take up central positions, which is why the onus will be on the wing-backs to provide width higher up the pitch. 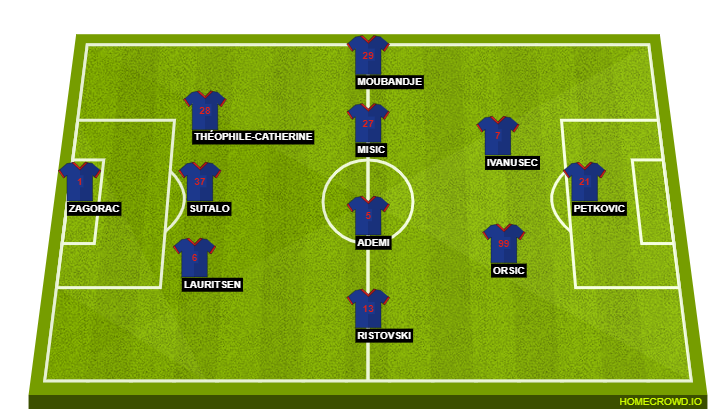 Unlike his counterpart in the Dinamo Zagreb dugout, David Moyes has no worries whatsoever on the team news front ahead of the trip to Stadion Maksimir. On Thursday, the West Ham United manager will have a full strength squad at his disposal.

Michail Antonio is available to take on Dinamo Zagreb, with the suspension that he incurred in the game against Southampton on the weekend only being valid in domestic football. The 30-year-old should, therefore, lead the line for West Ham, who will line up in their usual 4-2-3-1 formation.

Moyes could use the game as an opportunity to hand some valuable minutes to some of his fringe players as well as new additions, who already have a fair bit of experience in European football. So, Alphonse Areola ought to take up the spot between the sticks, with Kurt Zouma, Alex Kral and Nikola Vlasic all due a start.

Zouma will likely link up with Angelo Ogbonna at the heart of the West Ham defence, with Aaron Cresswell and Vladimir Coufal expected to continue as the two full-backs. Up ahead in midfield, Kral ought to pair up with Mark Noble in the double pivot, with Declan Rice and Tomas Soucek getting a breather.

As iterated earlier, Antonio will spearhead the West Ham attack against Dinamo Zagreb, with Vlasic likely to play off of him on Thursday. Andriy Yarmolenko could also be handed a rare start, with Jarrod Bowen completing the attacking unit for the Hammers. 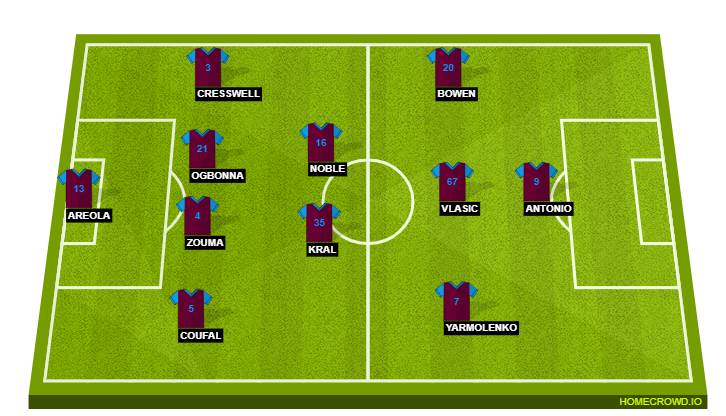 After a game to forget against Southampton, Michail Antonio will be raring to get back to his best and prove that the performance on the weekend was but a mere blip. Dinamo Zagreb’s defenders will, therefore, need to be at their very best at the back to keep out the West Ham United striker.

That he will be unavailable for the Hammers this weekend means Antonio can potentially play at full flow, which bodes well for his side. A big game on his Europa League group stage bow, and it will be interesting to see how Antonio fares on Thursday.

This is a game that is likely to be too close to call. Dinamo Zagreb are coming off a disappointing qualifying campaign for the UEFA Champions League and will be looking to prove that they are still a serious team in the Europa League. The same goes for West Ham United, albeit for different reasons.

With the Hammers’ summer signings set to start, David Moyes will expect his new boys to hit the ground running and deliver the goods on Thursday. However, West Ham’s defensive frailties could come to the fore against Zagreb, who will likely concede a goal to Michail Antonio to be held to a 1-1 draw first up in the Europa League.