Liverpool will be aiming to get back to winning ways when they take on Leeds United, who are in search of their first win of the season, on Saturday.

Gameweek 4 of the 2021/22 Premier League season continues on Sunday, with just one match on show. The game will be played at Elland Road, where Leeds United will be looking to get their first win on the board when they play hosts to Liverpool, who are looking to get back to winning ways themselves.

Leeds United have not quite been at their best in the early stages of the season, with the defensive issues from the initial periods of last term starting to crop up again. The Whites are yet to get their first win on the board, having been beaten 5-1 by Manchester United on the opening weekend before playing out successive draws with Everton and Burnley, leaving them in the bottom half.

Liverpool, on the other hand, have been largely impressive so far in 2021/22, having blown away Norwich City and Burnley in their opening two games. However, ahead of the international break, the Reds played out a frustrating 1-1 draw with Chelsea despite having a numerical advantage on the Blues for half of the game. Nevertheless, Jurgen Klopp will be happy his side is unbeaten early in the campaign.

The corresponding fixture last season saw Leeds United come from a goal down to hold Liverpool to a 1-1 draw, with Diego Llorente cancelling out Sadio Mane’s first half strike late on. Ahead of the latest meeting between the two sides, The Hard Tackle takes a closer look at the encounter.

Marcelo Bielsa does not have many injury issues hampering his preparations ahead of the visit of Liverpool. On Sunday, the Leeds United manager will only have to make do without one first-team player, with Robin Koch currently out on the sidelines.

So far this season, Bielsa has tinkered his side’s formation a fair bit, going from the 4-1-4-1 he has preferred for much of his time at Leeds to a 3-3-3-1 lately. However, against Liverpool, the Whites should revert to the 4-1-4-1 setup in front of goalkeeper Illan Meslier.

The shift in formation should see Diego Llorente and Liam Cooper pair up at the heart of the Leeds defence, with Luke Ayling and Junior Firpo expected to be the two full-backs. The duo will have the freedom to charge forward and look for creative and scoring opportunities, although they could be pegged back a lot by a formidable Liverpool attack.

Up ahead in midfield, the key man will once again be Kalvin Phillips, who will need to somehow keep a check on Mohamed Salah. The other two players in midfield will likely be Stuart Dallas and Raphinha, with the latter moving into a central role owing to the return of Daniel James.

Speaking of, James will be thrust into the thick of action straightaway, with Jack Harrison a certain starter on the left flank. Finally, Patrick Bamford, who has recently been linked with Liverpool, will lead the line as always for Leeds on Sunday. 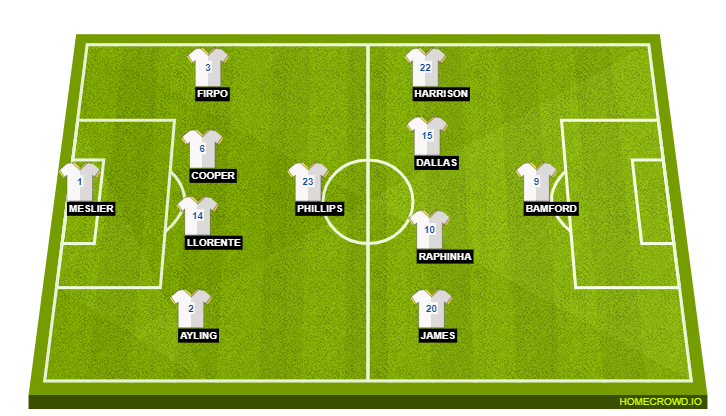 Like his counterpart in the Leeds United dugout, Jurgen Klopp barely has any problems to contend with ahead of the trip to Elland Road. On Sunday, the Liverpool manager will only be bereft of the services of one first-team player, with Roberto Firmino recovering from a hamstring injury.

With Firmino unavailable for the game on Sunday, Diogo Jota becomes a certain starter, with the Portuguese international set to lead the line for Liverpool against Leeds. The Reds’ attacking unit, though, will be rather fluid, with Jota, Mohamed Salah and Sadio Mane regularly interchanging positions.

The key selection decision will be in midfield, where Klopp will need to decide whether he hands a start to Harvey Elliott for a third successive game. With the teenage prodigy being rather impressive, it is likely that he will be a part of the three-man unit.

Meanwhile, there is some good news on offer for Liverpool as well, as Alisson Becker and Fabinho are allowed to feature after their initial five-day ban for not allowing them to join the Brazilian national side was lifted. Fabinho will, therefore, sit at the base of the midfield, with Jordan Henderson completing the numbers in the middle of the park.

Alisson, meanwhile, will take his place in goal, with Joel Matip and Virgil van Dijk forming the central defensive partnership. Finally, Trent Alexander-Arnold and the fit again Andrew Robertson will be the two marauding full-backs for Liverpool, with Kostas Tsimikas missing out. 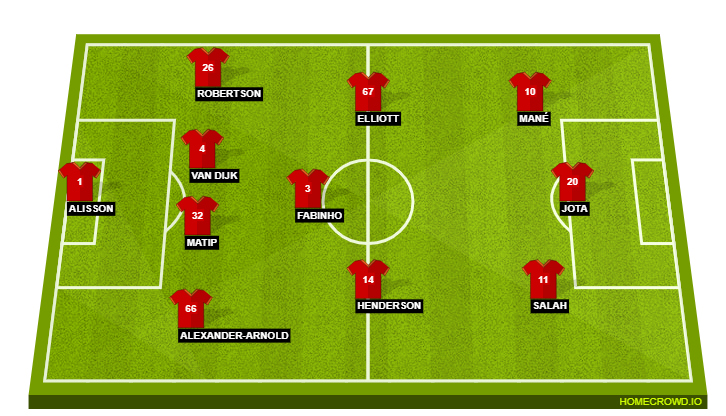 Roberto Firmino is out for the time being, meaning there is now a chance for Diogo Jota to seize his opportunity in the Liverpool attack. The Portuguese international has made a rocking start to the season, and is one of the form players in the Premier League at the moment.

Now, with Liverpool needing a win to stay in touch with early leaders Manchester United and Chelsea at the end of this gameweek, Jota will need to be at his very best to take some of the burden off of Mohamed Salah and Sadio Mane. A top notch outing will also help his make his case to become a first-choice option for good, possibly relegating Firmino to the bench when he returns.

This is a game that could be too close to call, just like the corresponding fixture last season. Leeds United might be a little vulnerable at the back at the moment, but they have been known to solidify things up in home games, and that could be the case when Liverpool pay them a visit.

Such an outlook could allow the Whites to pounce on the counter-attack and grab the lead. However, Liverpool are nothing if not a team with incredible fighting spirit. And that fighting spirit should lift them to make a big comeback, with Mohamed Salah and Diogo Jota being on target to hand a 2-1 win to the Reds.