Portugal will be aiming to end the international break with a third win in a row when they take on Azerbaijan at the Baku Olympic Stadium on Tuesday.

The first international break of the season is nearly at its end, but before then, some more urgent matter needs attention of the teams. Portugal will bring the curtains down on their action for the latest round of fixtures when they lock horns with Azerbaijan at the Baku Olympic Stadium on Tuesday evening.

Azerbaijan have unsurprisingly been the whipping boys of Group A of the FIFA World Cup 2022 Qualifiers, managing just one point after the first five games. With the top two already up to ten points, Azerbaijan do not seem to have much of a chance of making it to Qatar, especially owing to the presence of Poland and Republic of Ireland with the team selection.

Portugal, on the other hand, are currently on top of the standings in Group A of the FIFA World Cup 2022 Qualifiers. A Selecao have won four of their five games so far, with the other game ending in draw with Serbia. Most recently, Fernando Santos’s men have earned a comeback win over Republic of Ireland and a big win over Qatar in a friendly.

Portuga eked out a narrow 1-0 win the last time they clashed with Azerbaijan, earlier in the FIFA World Cup 2022 Qualifiers. Ahead of the latest meeting between the two sides, The Hard Tackle takes a closer look on the encounter.

Gianni De Biasi & co. will have their task cut out against Portugal (Photo by EPA/Armando Babani)

Gianni De Biasi does not have any fresh injury concerns hampering his preparations ahead of the visit of Portugal. On Tuesday, the Azerbaijan head coach will have a full strength squad to choose from, and he should name his strongest possible side.

De Biasi is expected to line Azerbaijan up in a 5-4-1 formation that will help them snuff out the space and time for Portugal to work around with, with the focus being on producing counter-attacking moves when afforded the opportunity to do so.

Shahrudin Mahammadiliyev will take his place in goal and in front of him, Elvin Badalov, Hojjat Haghverdi and captain Maksim Medvedev will be the three central defenders who will remain compact for the most part, with Azer Salahly and Abbas Huseynov being the two full-backs.

Up ahead in midfield, the onus will be on Gara Garayev and Emin Mahmudov to keep things tight in the middle of the park while keeping a check on Bruno Fernandes. Namik Alaskarov and Filip Ozobic will be the two wide men, providing attacking support to Mahir Emreli while also giving defensive support to the two central midfielders. 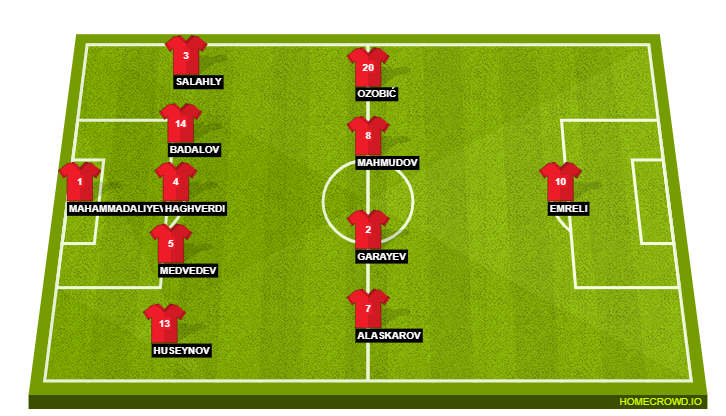 Unlike his counterpart in the Azerbaijan dugout, Fernando Santos will be bereft of the services of his best player. Cristiano Ronaldo, who was anyway going to be unavailable due to a suspension, has been given permission to join up with Manchester United ahead of his second debut for the club.

Apart from Ronaldo, the likes of Ricardo Pereira, Goncalo Inacio and Pedro Goncalves have all withdrawn from the squad due to fitness issues. However, the Portugal head coach has more than enough cover in his ranks to compensate for the absence of the quartet against Azerbaijan.

Rui Patricio is a certainty between the sticks for Portugal, who will line up in a 4-3-3 formation on Tuesday. At the heart of the defence, Pepe and Ruben Dias pick themselves while Joao Cancelo and Raphael Guerreiro will be the marauding full-backs for the visitors.

Up ahead in midfield, the impressive Joao Palhinha ought to get an opportunity to make an impact ahead of Ruben Neves and Joao Moutinho, with the 26-year-old being the only defensive presence in the middle of the park. Bernardo Silva and Bruno Fernandes will likely be the other two central midfielders, with the duo carrying more of a creative threat for Portugal.

Finally, in attack, Andre Silva will lead the line for Portugal against Azerbaijan in the absence of Ronaldo, with Diogo Jota and Rafa Silva being the two wide men. Francisco Trincao and Goncalo Guedes will be the backup options for the final third, with the duo likely to be introduced later on in the game. 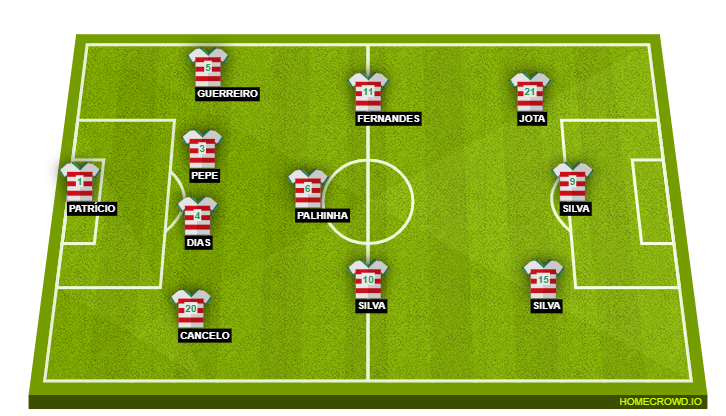 Bruno Fernandes will be under the spotlight. (Photo by Carlos Costa/AFP via Getty Images)

With Cristiano Ronaldo unavailable, Bruno Fernandes will shoulder much more responsibility for Portugal. Ahead of linking up with the veteran forward at Manchester United, Fernandes also gets a chance to get into the groove before he returns to club football.

This will also perhaps, be the final time the 26-year-old will be in-charge of penalties in the season, so if Portugal do get a spot-kick, the spotlight will be firmly on him. Otherwise, one can expect Bruno Fernandes to pull the strings all through the game and run rings around Azerbaijan.

There is no doubt as to what the final result will be. Azerbaijan might have managed to be put up a stubborn front and restrict Portugal to just a 1-0 win last time the two teams locked horns, but on Tuesday, Fernando Santos & co. ought to be much more comfortable.

Expect Bruno Fernandes and Andre Silva to be in their elements while Diogo Jota and Bernardo Silva ought to impress as well. So, even ithout the presence of Ronaldo, Portugal should come out unscathed, with The Hard Tackle predicting a 3-0 win for the visitors.