Manchester United will be looking to make it two wins in a row when they take on Southampton at St. Mary’s Stadium on Sunday.

Gameweek 2 of the 2021/22 season continues into Sunday, with as many as three matches on show on the day. The action on the day kicks off at St. Mary’s Stadium, where Southampton will play hosts to Manchester United, who will be aiming to win a second successive game at the onset of the campaign and reclaim top spot in the Premier League.

Southampton have been tipped for a difficult 2021/22 campaign following the exit of talisman Danny Ings as well as key defender Jannik Vestergaard. That is exactly what could be seen at the onset of their season as well, as they were handed a 3-1 defeat by Everton on the opening weekend, although Adam Armstrong did score a goal on debut.

Manchester United, on the other hand, are on the opposite end of the spectrum, with a lot of optimism surrounding them heading into the 2021/22 season. The Red Devils followed suit in their season-opening fixture as well, cruising to a 5-1 win over Leeds United, with Bruno Fernandes scoring a fine hat-trick.

The corresponding fixture last season was a pulsating encounter that saw Manchester United come from two goals down to beat Southampton 3-2. Ahead of the latest meeting between the two sides, The Hard Tackle takes a closer look at the encounter.

Ralph Hasenhuttl does not have any fresh injury concerns hampering his preparations ahead of the visit of Manchester United. On Sunday, the Southampton manager will be bereft of the services of a couple of first-team players, with Sam McQueen and Will Smallbone unavailable due to their respective knee injuries.

Otherwise, Hasenhuttl has a full strength squad at his disposal, with the Southampton boss set to line his side up in his usual 4-4-2 formation. There are some key decisions to be made as far as the outfield positions are concerned, but Alex McCarthy is a certainty in goal against Manchester United.

In front of McCarthy, Jan Bednarek and Mohammed Salisu ought to pair up at the heart of the Southampton defence, with Romain Perraud picking himself in the left-back slot. On the opposite flank, though, Hasenhuttl has to pick between Kyle Walker-Peters and Valentino Livramento, with the latter likely to get the nod once again.

Up ahead in midfield, James Ward-Prowse and Oriol Romeu are automatic picks in the central areas, with the former celebrating his new Southampton deal this week. Out wide, Moussa Djenepo and Stuart Armstrong will likely be favoured, with Theo Walcott missing out. Finally, the strike partnership is expected to be formed by Adam Armstrong and Che Adams once again. 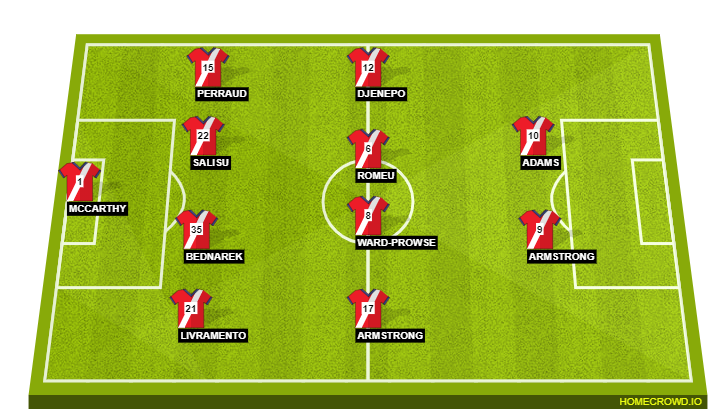 Unlike his counterpart in the Southampton dugout, Ole Gunnar Solskjaer is set to welcome back as many as two players into the fold, as they continue to regain their fitness. These players namely are Raphael Varane and Edinson Cavani, who have come a long way in regaining match fitness.

However, neither is expected to feature in the starting lineup, which is ideally likely to see only change. As for those who are missing for Manchester United, the key absentee remains Marcus Rashford (shoulder), while the likes of Dean Henderson (match fitness), Alex Telles (ankle) and Phil Jones (knee).

Back to the aforementioned change and Jadon Sancho could get the nod ahead of Daniel James on the right flank, bringing bundles of creativity into the side in the process. Mason Greenwood ought to continue leading the line for Manchester United, with Paul Pogba starting on the left as well. The no. 10 role, meanwhile, will be reprised by the one and only Bruno Fernandes.

As for the workhorses in the middle of the park, Scott McTominay and Fred are expected to form the double pivot again, with the former essaying a more defensive role while the latter will often charge forward to look for scoring opportunities while also pressing from advanced positions.

At the back, with Varane still not quite up to speed, Victor Lindelof will likely pair up with Harry Maguire at the heart of the Manchester United defence, while Aaron Wan-Bissaka and Luke Shaw pick themselves as the two full-backs. Finally, in goal, David de Gea will be raring to go in the continued absence of Henderson. 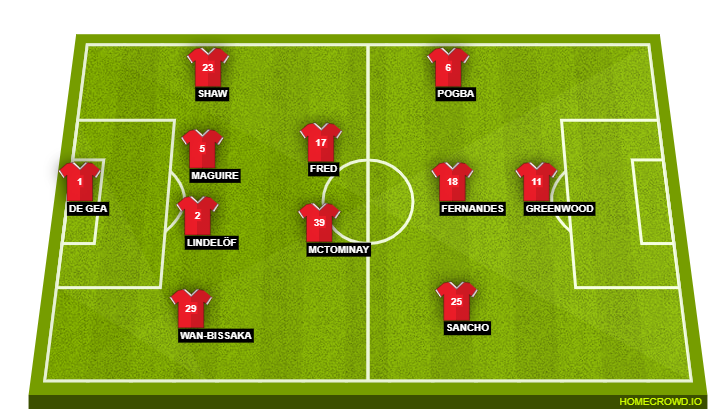 There appears to be no stopping a certain Bruno Fernandes while Paul Pogba continues to go from strength to strength under the tutelage of Ole Gunnar Solskjaer. However, the time has come for another superstar to be born at Manchester United, one who will likely be a long-term solution for one of the previously problematic positions at the club.

While Sancho brings a lot of creativity to the table, he will also make Manchester United’s attack a lot more fluid, which further brings Mason Greenwood into the game. Expected to make his first start for Manchester United, Sancho will be raring to go, and his performance on Sunday will be worth noting.

Manchester United are a force to be reckoned with on their travels and the fact that they are on the cusp of Premier League history will spur them on even further. Southampton, on the other hand, do not really make strong starts to their campaign at home, having failed to win any of their last nine such games.

With Jadon Sancho coming into the side, Manchester United will become an even more daunting proposition for their opponents, with Southampton unlikely to trouble them much if at all on Sunday. On the opposite end, Bruno Fernandes and Mason Greenwood should shine again, with Manchester United cruising to a 3-0 win that will take them back to the top of the Premier League.