Leeds United will be eager to get off the mark in the 2021/22 Premier League season when they welcome Everton to Elland Road on Saturday.

The 2021/22 Premier League season moves into its second weekend, as teams continue to try and get settled into a rhythm. The action in Gameweek 2 kicks off at Anfield, where Liverpool take on Burnley, with the second presentation of the day being “Goal Rush”, with Leeds United and Everton participating in one of the games.

Leeds United have made a woeful start to their campaign, as they were beaten quite handsomely by Manchester United, who grabbed a 5-1 win on the opening weekend. The Whites showed very little defensive acumen, which made it all the simpler for the Red Devils to cruise to a victory. And, that is an issue Marcelo Bielsa will need to address if his side is to avoid the dreaded second season syndrome.

Everton, on the other hand, were eager to make a big impact after ending their pre-season campaign with a 4-0 thumping at the hands of Manchester United. The Toffees, though, were rather impressive as they came from a goal down to beat Southampton 3-1, with Richarlison, Abdoulaye Doucoure and Dominic Calvert-Lewin on target.

The corresponding fixture last season saw Everton eke out a narrow 2-1 win over Leeds United, with Dominic Calvert-Lewin scoring the match-winner. Ahead of the latest meeting between the two sides, The Hard Tackle takes a closer look at the encounter.

Kalvin Phillips ought to return to the starting lineup for Leeds United. (Photo by Matt King/Getty Images)

Marcelo Bielsa is likely to have been handed a major boost on the team news front ahead of the visit of Everton to Elland Road. On Saturday, the Leeds United manager will only be bereft of the services of one first-team player, with Diego Llorente still recovering from a knock.

However, Kalvin Phillips is likely to come into contention to start against Everton after being an unused substitute against Manchester United last weekend. The English international should, thus, sit at the base of the Leeds midfield, with Robin Koch being relieved off those duties.

Koch will instead take his place at the heart of the Leeds defence, pairing up with captain Liam Cooper at the back. Luke Ayling and Junior Firpo, meanwhile, pick themselves as the two full-backs, with Illan Meslier a certainty in goal.

Up ahead in midfield, Stuart Dallas will return to his midfield role after being deployed as a left-back in the first half of the game against Manchester United last weekend. Dallas will accompany Mateusz Klich in the advanced midfield position, with Rodrigo Moreno dropping to the bench.

The creative impetus will not just flow from Dallas and Klich but also Raphinha, who will be a thorn on Everton’s side, going up against the experienced Lucas Digne on his flank. On the left-wing, Jack Harrison will bring some more directness to the play, with Patrick Bamford leading the line for Leeds against Everton. 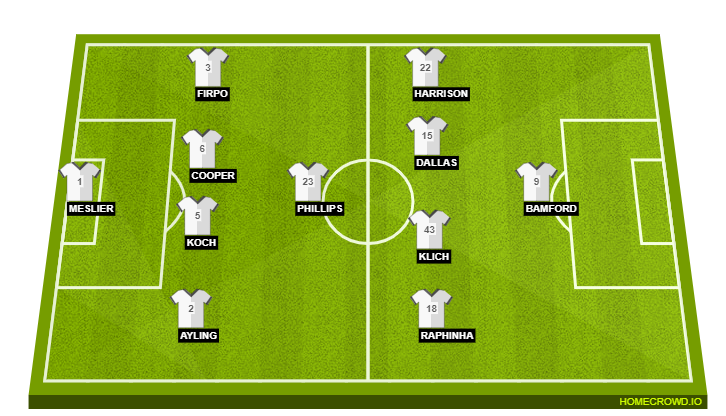 Like his counterpart in the Leeds United dugout, Rafael Benitez does not have any fresh roster issues hampering his preparations ahead of the trip to Elland Road. On Saturday, the Everton boss will have to make do without as many as four first-team players.

The major absentee is James Rodriguez, whose future continues to be a subject of some intense speculation. In addition to the Colombian international, the likes of Ben Godfrey, Jean-Philippe Gbamin and Andre Gomes are all unavailable as well for Everton.

Jordan Pickford will be the man between the sticks, with Everton lining up in a 4-2-3-1 formation against Leeds. Mason Holgate and Michael Keane ought to form the central defensive partnership, with Lucas Digne and Seamus Coleman being the two full-backs for the visitors.

Up ahead in midfield, Abdoulaye Doucoure and Allan will form a rather solid double pivot, with the former also often charging forward to create overloads in the final third. The key men for Everton, though, will invariably be Richarlison and Dominic Calvert-Lewin, with the support for the duo coming from Demarai Gray and Andros Townsend. 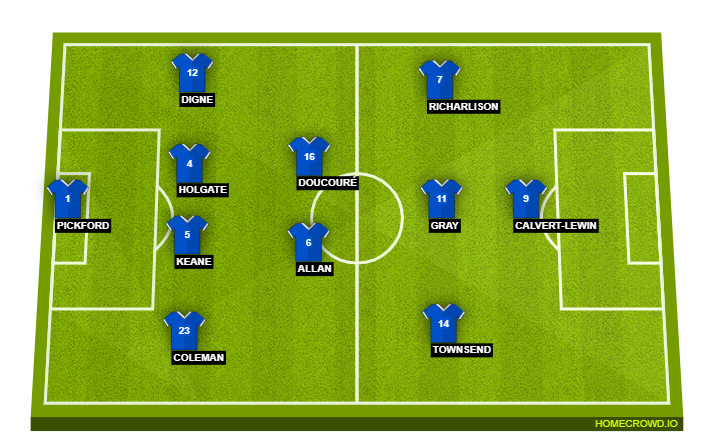 After the horrific showing against Manchester United last week, Marcelo Bielsa is likely to pull up several of his star performers and demand a big performance from them. One of the players who will likely be rapped on the knuckles is Patrick Bamford, who was anonymous in the season-opening fixture.

While Manchester United were formidable defensively, Everton will likely present better attacking opportunities, even if they are quite stubborn at the back. And so, the onus will be on Bamford to make better use of his movement in order to not only bring those behind him into the game but also fashion better openings for himself. A big game for Bamford to get up and running.

Judging by their respective performances last week, Everton will fancy their chances of continuing their perfect start to the season. However, Marcelo Bielsa is nothing if not a quick learner, and after showing an inclination to make defensive improvements to his side in the second half of the season, we can expect the Leeds United manager to make corrections much quicker this term.

The return of Kalvin Phillips will also boost the Whites’ prospects massively, as will Stuart Dallas’ return in the midfield role. Having said that, some of Leeds’ defensive issues will bring Dominic Calvert-Lewin and Richarlison into the game, with the Everton duo likely to be in business all through the contest.

In the end, the game will hinge on the finest of margins, with a lively Raphinha likely to be the man to make all of the difference. The Hard Tackle, therefore, predicts a 2-1 win for Leeds United, who get up and running for the 2021/22 season in the process.