Liverpool will be eager to begin their 2021/22 campaign on a high when they take on Norwich City at Carrow Road on Saturday.

The 2021/22 Premier League season is underway, with Brentford already pulling off the first upset of the campaign by beating Arsenal in their very first Premier League game. Saturday will be an action-packed day, with the proceedings wrapping up at Carrow Road, where Norwich City will play hosts to Liverpool.

Norwich City are back in the Premier League in the first time of asking, having clinched an automatic berth in the Championship standings. The Canaries, though, will be wary of the way they performed the last time they were in the top-flight and will look to reduce the expansiveness to a little extent while focusing more on the defensive side of their game to give a better account of themselves.

Liverpool, on the other hand, are coming off the back of a roller-coaster of a campaign wherein they had to battle it out for a top four finish, having started the season as the defending champions. But, the Reds are now back at full strength, and raring to challenge for the title once again, with the return of Virgil van Dijk being crucial.

Liverpool were 1-0 victors the last time they locked horns with Norwich City at Carrow Road, with Sadio Mane scoring the only goal of the game. Ahead of the latest meeting between the two sides, The Hard Tackle takes a closer look at the encounter.

The key man for Norwich City, Cantwell is fit and ready to go. (Photo by Catherine Ivill/Getty Images)

Daniel Farke has seen his squad’s woes on the team news front ease up considerably after a recent outbreak in the first-team squad. On Saturday, the Norwich City manager will only be bereft of the services of three players, with the majority of the erstwhile doubts available for selection.

In particular, only Przemyslaw Placheta and Bali Mumba are the only players still showing some effects of the the coronavirus infection that they have recovered from. The only other absentee for Norwich is Sam Byram, who remains sidelined due to a hamstring injury.

The good news, though, is that Todd Cantwell is available for selection after recovering from an ankle injury sufficiently. Cantwell ought to take his place in the final third, lining up in the three-man attacking setup alongside Teemu Pukki and Milot Rashica.

As for the midfield, Pierre Lees-Melou and Lukas Rupp will be the workhorses for Norwich, providing defensive support to Billy Gilmour while also being in-charge of bringing the forward thrust from the middle of the park.

At the back, Grant Hanley will be tasked with keeping things organised, with Ben Gibson being his central defensive partner. Max Aarons and Dimitrios Giannoulis will be the two full-backs, with Tim Krul taking his place in goal, where he will likely be kept busy by a rampaging Liverpool attack. 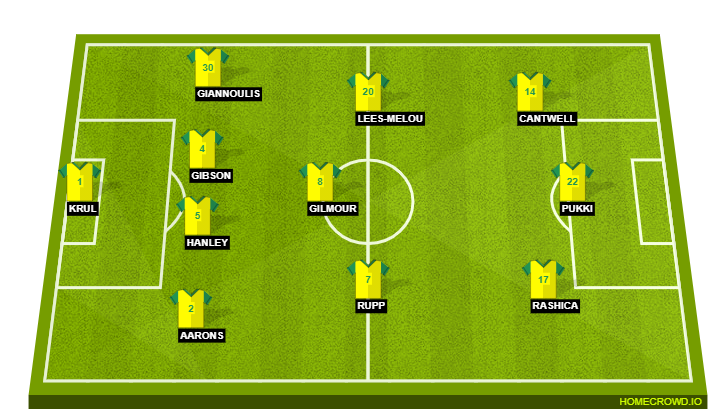 Like his counterpart in the Norwich City dugout, Jurgen Klopp barely has any roster issues to deal with ahead of the trip to Carrow Road. On Saturday, the Liverpool boss will only have to make do without two first-team players.

Andrew Robertson is recovering from a minor ankle injury while Curtis Jones has been ruled out by a concussion. In addition, Jordan Henderson is a doubt due to a lack of match fitness, although the Liverpool captain will likely be an option off the bench.

The absence of Robertson will give Kostas Tsimikas a chance to impress, with the Greek defender taking his place in the left-back slot. On the opposite flank, Trent Alexander-Arnold is a certainty while Ibrahima Konate is likely to make his debut for Liverpool, pairing up with Virgil van Dijk at the heart of the defence, which will provide cover to Alisson.

Up ahead in midfield, Thiago Alcantara is expected to be the unfortunate candidate to miss out for Liverpool, with James Milner and Naby Keita starting alongside Fabinho. Finally, in attack, Sadio Mane, Mohamed Salah and Roberto Firmino are all expected to feature, with Diogo Jota making an appearance off the bench. As should Harvey Elliott, who is tipped for a bright season with Liverpool in 2021/22. 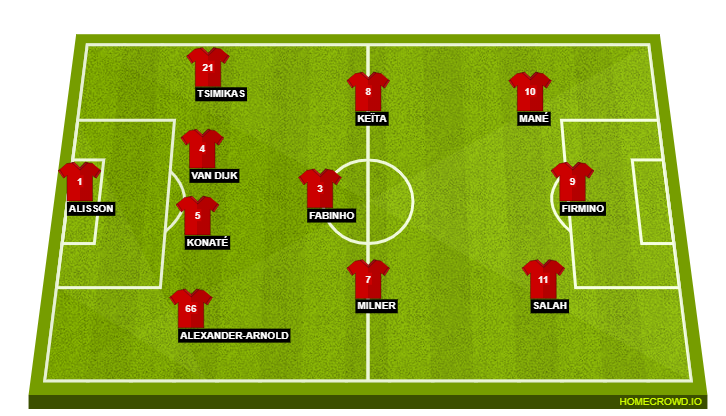 Time for Mane to deliver. (Photo by Clive Brunskill/Getty Images)

A lot of the inconsistencies that Liverpool endured last season were attributed to the absence of a certain Virgil van Dijk. However, that often took the attention away from the fact that Sadio Mane blew hot and cold at an alarming rate, barely making it into double figures for goals.

That, in turn, added to the burden on Mohamed Salah’s shoulders, which made it a tad bit easier for opponents to contain Liverpool. However, after ending the 2020/21 season on a strong note, the onus will be on Mane to rediscover his best touch, especially with Diogo Jota breathing down his neck. Will Mane stand and deliver, or will he be back to struggling to perform at his best?

There are no two ways about it. Jurgen Klopp will accept nothing less than three points from this game, with a clean sheet a major objective as well. Indeed, after a difficult campaign in 2020/21, Liverpool will be desperate to shore up the defensive side of their game massively, and the return of Virgil van Dijk should go a long way in addressing that.

What also holds the Reds in good stead is the improvement that Trent Alexander-Arnold and Sadio Mane showed towards the end of last season, with the duo expected to carry it into the new season. As for Norwich, they have improved defensively and will pose some threat on the opposite end of the pitch. However, they will be no match for Liverpool, who should win this one quite comfortably.