FA Cup holders Leicester City will take on Premier League champions Manchester City on Sunday when they face off for the Community Shield at Wembley.

The 2021/22 season is about to officially kick off in England, and the traditional curtain raiser is set to be played this weekend at Wembley. On Saturday, FA Cup holders Leicester City will lock horns with Premier League champions Manchester City as both teams look to begin their respective campaigns on a strong note.

Leicester City have made it to the Community Shield contest on the back of winning the FA Cup last season. In the final, the Foxes got the better of Chelsea, courtesy of a 1-0 win, with Youri Tielemans scoring the only goal of the game. Winning the Community Shield is now the immediate objective for the Foxes, who have not had the most ideal of pre-season preparations.

Speaking of, Manchester City have hardly been able to prepare themselves for the 2021/22 season on the best possible note, with a major portion of their squad unavailable due to their participation at the UEFA Euro 2020. Nevertheless, such is the squad assembled under Pep Guardiola that City will still have quite a formidable lineup against Leicester this weekend.

Manchester City were 2-0 victors the last time they took on Leicester City, back in April at the King Power Stadium, with Benjamin Mendy and Gabriel Jesus on target. Ahead of the latest meeting between the two sides, The Hard Tackle takes a closer look at the encounter.

Hello guys, many thanks for all your messages. It is a bad day today but I am in a tremendous club with a wonderful medical team. I will give you news as a soon as I have a final diagnosis but we already know that I have a fibula fracture. I will come back soon and stronger pic.twitter.com/lYIccZ0Bb9

Brendan Rodgers has been handed a major blow on the team news front ahead of the Community Shield tie this weekend. Against Manchester City on Saturday, the Leicester City manager will have to make do without as many as five first-team players.

Wesley Fofana is the latest player to be sidelined after the young Frenchman sustained a gruesome leg injury during a pre-season friendly against Villarreal. Apart from Fofana, the likes of Jonny Evans (foot), James Justin (knee), Timothy Castagne (face), and Nampalys Mendy (groin) are all unavailable as well, with only Castagne expected to be fit in time for the Premier League curtain-raiser next week.

Meanwhile, the absence of Fofana and Evans means Wilfred Ndidi is likely to pair up with Caglar Soyuncu at the heart of the Leicester City defence for the foreseeable future. However, Ndidi’s void in midfield is unlikely to be felt a great deal, with new signing Boubakary Soumare likely to take his spot in the middle of the park.

Soyuncu and Ndidi are likely to be flanked by Ricardo Pereira and Ryan Bertrand in the backline, with Kasper Schmeichel likely to take his place between the sticks for Leicester. Up ahead in midfield, the returning Youri Tielemans is likely to line up alongside Soumare, with Harvey Barnes and Marc Albrighton being the two wide midfielders.

The key decision for Rodgers will be the choice of two strikers. Patson Daka is one of the future, but it is likely that Jamie Vardy and Kelechi Iheanacho will renew their partnership in the early stages of the season, with Daka starting off as an impact substitute. 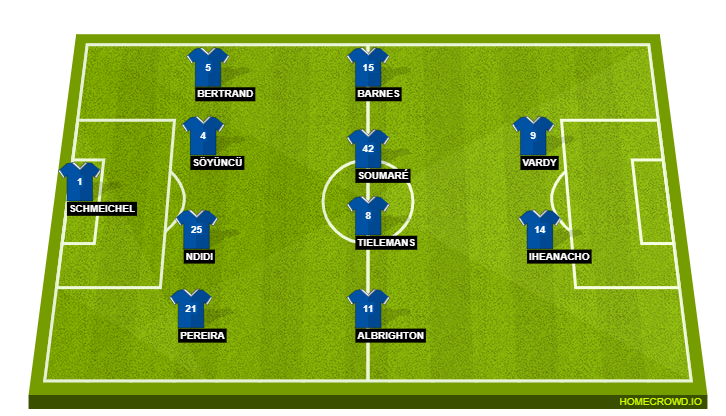 Unlike his counterpart in the Leicester City dugout, Pep Guardiola does not have a plethora of players absent due to fitness-related issues. Indeed, the Manchester City boss will only be bereft of the services of two first-team players due to injuries, with Phil Foden (foot) and Liam Delap on the sidelines.

The big issue for Guardiola heading into the season is the sheer number of players who are yet to either return to pre-season training or have enough sessions to make themselves available for a starting spot. Some of these players include John Stones, Ederson Moraes, Kevin De Bruyne and Gabriel Jesus, while new signing Jack Grealish is only likely to appear off the bench.

Therefore, the team that takes the field against Leicester will be largely second string, with Joao Cancelo, Ruben Dias, Fernandinho, Ilkay Gundogan and Riyad Mahrez having the responsibility to guide those around them.

In the absence of Ederson, Zack Steffen will be the man in goal for Manchester City, with Cancelo and Ruben Dias combining with Nathan Ake and Benjamin Mendy in the four-man defensive setup against Leicester. Up ahead in midfield, Fernandinho and Gundogan could have the impressive Cole Palmer for company.

Another impressive youngster, Samuel Edozie, will get a chance to impress as well, with the 18-year-old taking his place out on the flanks. The other two attacking players ought to be Bernardo Silva and Mahrez, who will be going up against former club Leicester on Saturday. 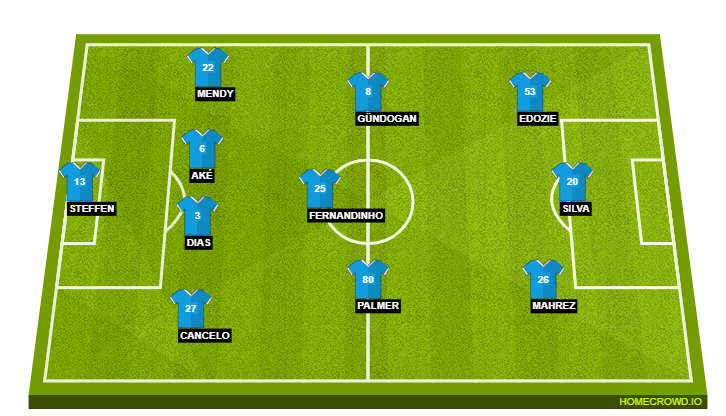 For a couple of years now, there has been talk of Jamie Vardy’s succession plan. The veteran English striker has been a phenomenal player for Leicester City over the years but will need to be phased out sooner or later. To that end, the Foxes have managed to land Patson Daka this summer.

A player who comes to England with the reputation of being a forward who scores goals for fun, the Premier League will be a massive step up in levels for the youngster. And a solid initiation in the Community Shield contest will go a long way in helping him get settled down at the club. So while he may not start the game, an appearance off the bench will serve him good, and it remains to be seen how he fares then.

Manchester City might be missing some very big players, but they still carry a great deal of threat in the final third. Not to mention, we might just see an appearance from marquee summer arrival Jack Grealish, who has it in him to change the tide of the game singlehandedly.

However, with the Leicester attack and midfield being at full strength, the Foxes do seem to be edging the Premier League champions heading into the contest. With that in mind, The Hard Tackle is going for a 2-1 win for Brendan Rodgers & co. in what will be a fabulous start to the season.