A place in the UEFA Euro 2020 semi-finals will be on the line when Ukraine take on England in the quarter-final clash on Saturday.

The penultimate stage of the UEFA Euro 2020 is nearly upon us but before that, we just have the small matter of completing the second semi-final tie. The first of the two semi-finalists in that game will be confirmed from the meeting between Czech Republic and Denmark, with the second match on Saturday pitting Ukraine against Denmark at Stadio Olimpico in the final quarter-final fixture.

Ukraine made it to the knockout stages of UEFA Euro 2020 by the skin of their teeth but produced a spirited performance in the Round of 16 to get the better of Sweden, who had topped Group E to reach the stage. Andriy Schevchenko’s men prevailed in the dying embers of extra-time, with Artem Dovbyk scoring the late winner.

England, on the other hand, seem to have grown in confidence and cohesion with every passing game, although they are still not performing to potential. Even so, the Three Lions have by far the best defensive record in the competition, having kept a clean sheet in each of their four games so far. And after topping Group D, Gareth Southgate & co. produced a marvellous performance to beat Germany 2-0 last time out.

England and Ukraine played out a goalless draw the last time they faced off against each other, in a FIFA World Cup 2014 qualifying fixture back in 2013. Ahead of the latest meeting between the two sides, The Hard Tackle takes a closer look at the encounter.

Andriy Schevchenko has a couple of fresh roster issues hampering his preparations ahead of the UEFA Euro 2020 quarter-final tie with England. On Saturday, the Ukraine head coach will be bereft of the services of a couple of players due to suspension, with Oleksandr Zubkov and Artem Besedin missing out.

Artem Besedin will miss Ukraine's Euro 2020 clash with England after being ruled out for up to six months with a knee injury sustained against Sweden pic.twitter.com/DU8ByT8JfS

Heorhiy Bushchan will take his place between the sticks for Ukraine, who will likely be set up in a 3-5-2 formation against England. The system will morph into a 5-3-2 shape during the defensive phases, with the three centre-back – Illya Zabarnyi, Serhiy Kryvtsov and Mykola Matviyenko – remaining compact in such scenarios.

As for the two wing-backs, Oleksandr Karavaev and Oleksandr Zinchenko will have the onus on them to provide the creativity from the flanks whenever Ukraine charge forward. When off the ball, the duo will quickly drop deep to create a back five that will effectively kill off the space for England to operate from.

Ukraine’s defensive outlook in the game will put a lot of responsibility on Serhiy Sydorchuk, Taras Stepanenko and Mykola Shaparenko, with Ruslan Malinovskyi likely to be introduced off the bench to provide the forward thrust late in the second half, if Ukraine are still in the game.

As for the strike partnership, Andriy Yarmolenko and Roman Yaremchuk are pretty much certain starters in the final third, with the former also donning the armband for Ukraine. Meanwhile, Artem Dovbyk, the match-winner against Sweden, will once again be an option off the bench versus England. 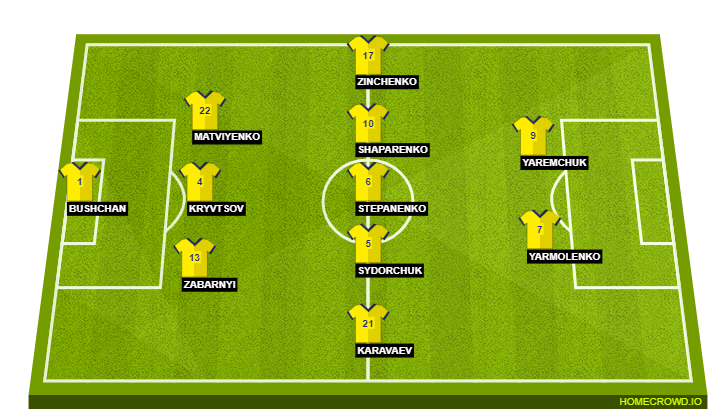 Unlike his counterpart in the Ukraine dugout, Gareth Southgate is not being bogged down by any certain absentees heading into his side’s UEFA Euro 2020 quarter-final fixture just yet. However, the England boss might still have to make do without one player, as Bukayo Saka is a doubt due to a knock he sustained in training.

As for their starting lineup, Southgate could probably revert to the 4-2-3-1 formation he has trusted for much of UEFA Euro 2020 after having utilised a 3-4-3 setup to negate Germany’s system in the Round of 16 clash. The extra defender bowing out of the side could be Kieran Trippier, with Kyle Walker starting as the right-back.

On the left flank, Luke Shaw is a certainty, as he looks to continue his fine run of form. At the heart of England’s defence, there is no looking past John Stones and Harry Maguire, who has been rock solid since his return to action.

Up ahead in midfield, Southgate is unlikely to tinker with the dependable partnership of Declan Rice and Kalvin Phillips, meaning Jordan Henderson misses out again. As for the attacking unit, the key decision could centre around who replaces Saka.

Jack Grealish made a world of difference off the bench versus Germany. So, if Saka is unable to prove his fitness in time ahead of the meeting with Ukraine, the Aston Villa captain could get a chance to impress from the get-go for a change. Raheem Sterling and captain Harry Kane pretty much pick themselves in the final third, with Mason Mount likely to be the final man in attack for England. 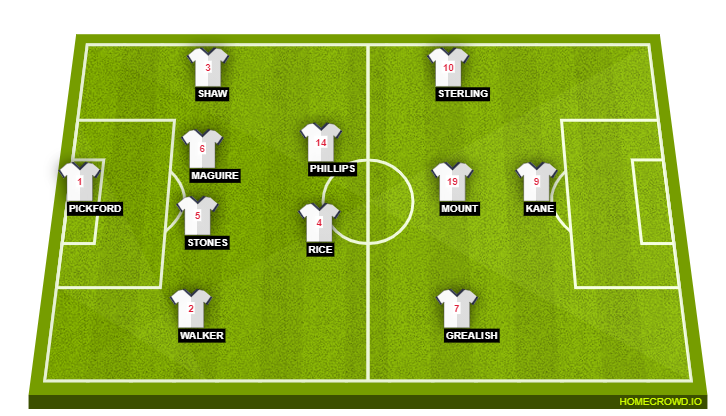 In a team that does not have many individuals capable of producing moments of pure brilliance, Andriy Yarmolenko surely stands out. A scorer of great goals, Yarmolenko has not proven to be a great player over the course of his career, blowing hot and cold at an alarming rate.

Having said that, things take a different turn when he dons the colours of his national side. With history beckoning them, it is Yarmolenko who will need to raise his hand and deliver the goods in the final third, although England will be a tough nut to crack. Will the Ukraine skipper make himself count?

As far as England are concerned, many players were contenders for this section. However, Jack Grealish takes the cake for grabbing his opportunities with both hands whenever they have come his way, especially with Gareth Southgate being reluctant to hand him starts on a consistent basis.

However, after making a lasting impression off the bench and playing a pivotal role in the big win over Germany, the England boss might not have much of an option but to field Grealish from the off. This will, therefore, be the big chance for Grealish to make one of the spots in attack his own, but will he continue impressing?

It will be typical of England to lose to one of the more unheralded teams after having managed to get the better of one of the better teams in a competition. However, this team is built on a colossal defensive unit that hardly gives an inch at the back, and that should prove to be the case against Ukraine as well, although Andriy Shevchenko & co. will still leave it all on the pitch.

On the opposite end, England might not be at their free flowing best again, but should have more than enough gas in the tank to outlast Ukraine and reach the UEFA Euro 2020 semi-finals. The Hard Tackle predicts a 1-0 win for Gareth Southgate and his charges, with captain Harry Kane finding the back of the net again.